Add an Event
Newswire
Calendar
Features
Home
Donate
From the Open-Publishing Calendar
From the Open-Publishing Newswire
Indybay Feature
Publish to Newswire
Add an Event
Related Categories: Peninsula | Anti-War
Impeachment, Peace, Truth, Abolish the Patriot Act?
by Carol Brouillet (cbrouillet [at] igc.org)
Wednesday Mar 1st, 2006 10:54 PM
If your political activities were noticed and you were removed from your Congresswoman's rolladex and not invited to the upcoming Town Hall Meeting- consider this an invitation...
Make your voice, issue heard at the Town Hall Meeting with Congresswoman Anna Eshoo Saturday, March 4th, Mountain View 9:30 am! 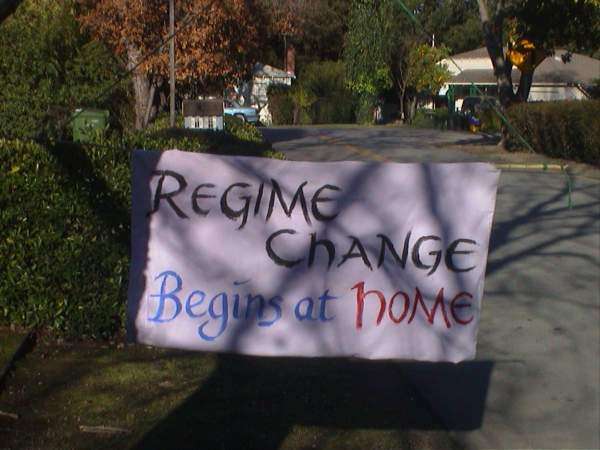 After marching on Eshoo’s office for years, I got so angry at her position on the most critical issues, that I accepted the suggestion to run against her on the Green Party ticket. Before doing so, however, I told her that if she would champion my issues, I would be her greatest supporter. No- she wouldn’t touch Impeachment (thinks change should happen via the ballot box- ignoring two stolen elections…) Truth? No- She believes the 9-11 Commission was bipartisan and thorough, ignoring ample evidence that it was the biggest cover-up sionce the Warren Report, deeply flawed- the official Report being a 580 page lie used to sell endless wars, the trashing of the Constitution, the Bill of Rights, the construction of “Homeland Security,”the bogus “war on terrorism,”… Worse she co-sponsored The Intelligence Transformation Act which expanded and reorganized the CIA, which frankly should be abolished for all the harm that they have caused. She also would rather “tweak” the Patriot Act than allow it to die the death it deserves.

If you live in the 14th District, make your voice, your issue heard this Saturday in Mountain View

And if you thought the Democrats would save us from the Republicans, think again. Read their position on their vision, to expand corporate globalization and remain #1 in the world, that’s right! Military dominance, superpower status, is just fine with the Democrats-

“We must make the decision now to ensure that America remains the world leader. Working with leaders from the high-technology, venture capital, academic, biotech and telecommunications sectors, we have identified and are committed to priorities that will guarantee our national security and prosperity, expand markets for American products, and assert economic leadership throughout the world.”

From the Innovation Agenda- A Commitment to Competitiveness to keep America #1, proudly flaunted from Anna Eshoo, and other Democrat’s websites.

Peace, Justice, Truth, Ecological Wisdom aren’t part of the agenda and there won’t be any talk or action on impeachment, unless we make a lot of noise.

Last Thursday, the Northern California 9-11 Truth Alliance held a benefit at the Grand Lake Theater entitled “Question 9-11- A Call to Activism,” and I had the opportunity to speak about leadership-

Our world has been in crisis/turmoil since 9-11, desperate for genuine leadership. Bush and Cheney have shown us the sort of leadership that mobsters use when they break a few windows and shakedown the storekeeper to hire them to protect themselves against vandals. We need to show the kind of leadership that exposes the “fake protection racket” and frees all of us from “extortion, fear and the threat of more violence.”
We need to challenge the Big Lies, the Endless Wars, the threat to all people and planet that is emanating from the largest Terrorist organization in the world, located in Washington DC.

(Eshoo generally informs voters of her Town Hall meetings, but apparently those of us who have marched on her office or challenged her in some way were uninformed of the upcoming event. I only heard about it from a friend, today.)

http://www.carolforcongress.org
Add Your Comments
Support Independent Media
We are 100% volunteer and depend on your participation to sustain our efforts!