Add an Event
Newswire
Calendar
Features
Home
Donate
From the Open-Publishing Calendar
From the Open-Publishing Newswire
Indybay Feature
Publish to Newswire
Add an Event
Related Categories: Santa Cruz Indymedia | Global Justice & Anti-Capitalism | Media Activism & Independent Media
El Enemigo Común screening in Watsonville March 2nd
by Indymedia and the Brown Berets present (scimc [at] indymedia.org)
Monday Feb 27th, 2006 10:59 PM
Austin Indymedia (ATXIMC) has been traveling back and forth to communities of unarmed indigenous people in Oaxaca, Mexico for the last 5 years (on and off), and in that time ATXIMC has contributed to release of 21 political prisoners, and helped spearhead three Amnesty International Campaigns. The most recent Amnesty Campaign has resulted in 39 community members being able to return home after being displaced by a paramilitary attack. 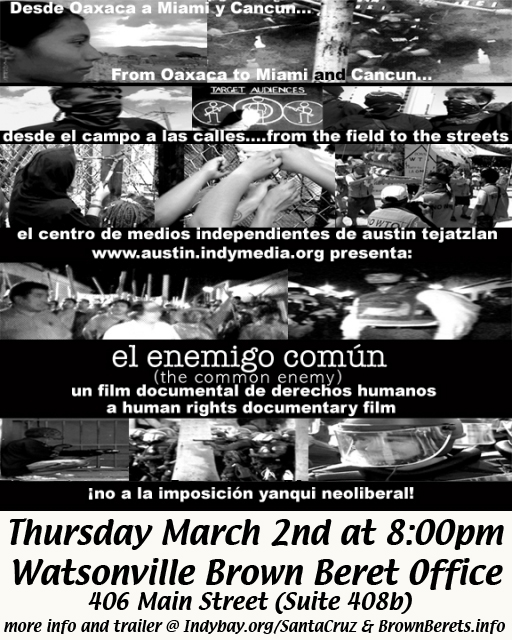 "el enemigo común" scratches beneath the surface of neoliberalism, at some of the its most hidden atrocities in recent North American history. The film documents instances of paramilitary activity against indigenous communities in Oaxaca, Mexico from 2002 through 2005 while including scenes from an international human rights movement in 2003, in Miami against the Free Trade Area of the America's, and in Cancun against the World Trade Organization. The three locations in isolation expose the disparity of North American resistances, but together bring us closer to understanding the nature of an emerging common struggle.

Tear gas, rubber bullets, and direct actions set behind the compelling faces and voices of survivors of incomprehensible atrocities expose the extremes of these relevant acts of modern political repression. The film challenges what we already know about paramilitary activity in Mexico, US involvement in said activity, and the current face of resistance against human indignity and injustice in North America Today.

Bouncing back and forth from community to community, "el enemigo común" is both an introduction to some of the many ignored resistances in North America, and it is also an urgent call to action for international civil society, to stand in solidarity against state sponsored repression and for human peace, dignity and justice, in Oaxaca, Mexico. The film provides a historical context for the current violent incarnation of capitalism and empire, and provokes action against it as a common enemy. 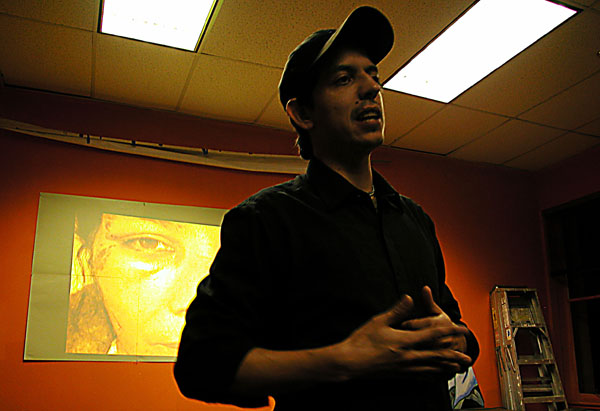 Monte Alban was the ancient capital of the Zapotecs and one of the first cities in Mesoamerica.
Add Your Comments
Support Independent Media
We are 100% volunteer and depend on your participation to sustain our efforts!