Newswire
Calendar
Features
Home
Donate
From the Open-Publishing Calendar
From the Open-Publishing Newswire
Indybay Feature
Publish to Newswire
Add an Event
Related Categories: East Bay | Anti-War | Education & Student Activism
Oaklander stages 5-day, 24-hour protest against war in park
by Jeff Paterson, Not in Our Name (jeff [at] paterson.net)
Wednesday Feb 22nd, 2006 12:11 AM
On Monday morning, February 20, Hyim Jacob Ross unfolded his camping chair in Splash Pad Park across from the Grand Lake Theater in Oakland, California and began a five-day, around the clock one-person vigil to oppose the war on Iraq, and for peace and education. At Splash Pad tonight and tomorrow: Wednesday night, February 22, 5:30 pm vigil "Lies, Torture, Spying? Not in Our Name!" * Thursday night, February 23, 6:30 pm vigil in solidarity with Hyim on the last night of his protest. 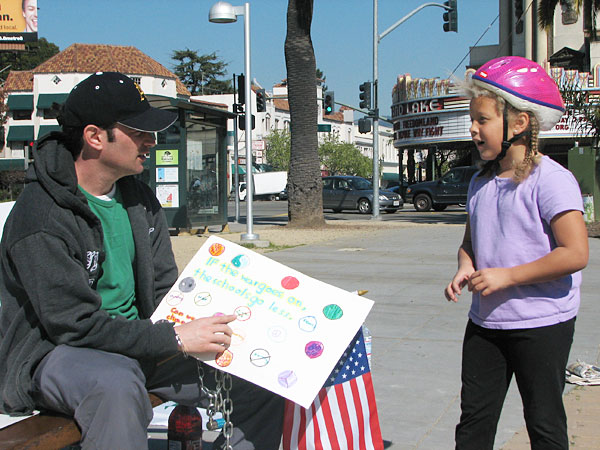 On Monday morning, February 20, Hyim Jacob Ross unfolded his camping chair in Splash Pad Park across from the Grand Lake Theater in Oakland, California and began a five-day, around the clock one-person vigil to oppose the war on Iraq, and for peace and education.

On spring break from his elementary school teaching job in Richmond, the 30-something Bay Area native felt that while the occasional protest march was important – as a musician, he’s actually performed at few of them – something more had to be done.

“A lot of people are afraid of taking a stand, or putting the word out there, or just don’t know how” Hyim explained. “This is active non-complicit-ness.”

“I’m not spending any money this week. And I’m not contributing any money to taxes – a portion of which goes to a war effort that’s immoral.”

His official press release describes his five day vigil and juice fast as a “response to the effect the depletion of economic and social resources the Iraq war is having on our domestic programs and services (especially education and children’s health).”

Hyim summed it up for me in even clear terms: “The war on Iraq is costing us over 240 trillion dollars. Meanwhile here in California, the richest state in the richest country in the world, we have over two million children going hungry every single day… This is something I see personally, not something I hear about or read about. My children come to school hungry. That is a crime.”

Seven-year-old Oakland resident Maya stopped by with her mother to add her poster to the growing collection of anti-war and peace drawings now posted along Grand Avenue. Many of these posters were made by Hyim’s students who have stopped by with their parents to lend support. Maya was busy learning how to ride her new bicycle, but took a few moments to explain that she supported his protest because,”Kids needed more schools and less war.”

“There’s so much potential if we put our resources into our children. We can make this world a beautiful place. That’s why I’m here for five days on a hunger strike.”

Through the morning, afternoon, and well into the evening, a constant stream of folks stopped by to offer their support, bottled water, or just their phone number in case Hyim found himself in need of anything over the coming days. While he explained to me what he was doing, probably for the hundredth time in the last day and half, his own music teacher from 15 years ago pulled up seat to blow a few tunes on his horn. Later, when I checked in on Hyim last night at 9:00 pm, a dozen people had clustered in the cold to lend their support.

When folks ask about the small American flag he is usually holding with his cuffed and chained hands, he explains, “When people internationally see that there are people here in the United States protesting, that’s important. Also, this is America too.” Yet to symbolize the erosion of civil liberties in the name of the “war on terror,” Hyim keeps himself chained to the bench.

Tonight, Wednesday, February 22, join Not in Our Name and Hyim Jacob Ross across from the Grand Lake Theater to protest our government’s continuing attacks on people’s rights. This event is hosted by Not in Our Name Bay Area as part of the national “Witness to Lawbreaking” vigils initiated by MoveOn.org. Join us to declare, “Lies, torture, spying? Not in our name!”

Tomorrow night, Thursday, February 23, Lake Merritt neighbors of Hyim (and far flung friends new and old) are gathering at 6:30 pm to join Hyim for the final evening of his protest vigil.

What’s next for Hyim? Well, he’s playing a gig Friday night at Jelly’s, a music club in San Francisco. You can listen to some of his music, including his new album “Hyim and the Fat Foakland Orchestra,” on his website: http://www.hyimvibe.com. Then it’s back to school on Monday.
http://www.hyimvibe.com
§Hyim Jacob Ross (above with 7-year-old supporter Maya)
by Jeff Paterson, Not in Our Name (jeff [at] paterson.net) Wednesday Feb 22nd, 2006 12:11 AM 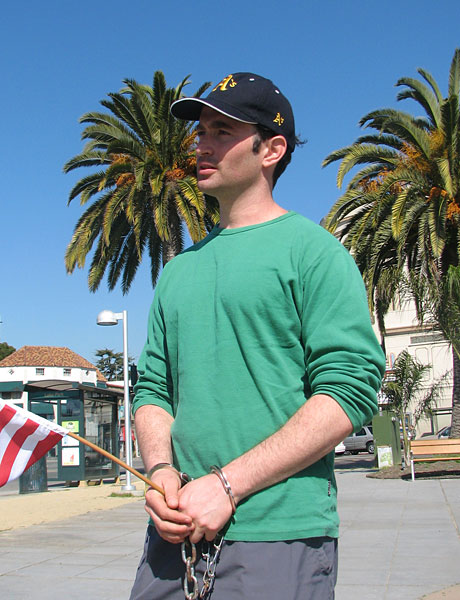 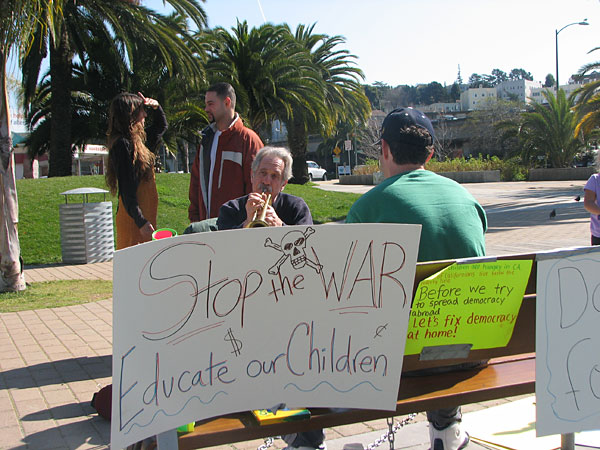 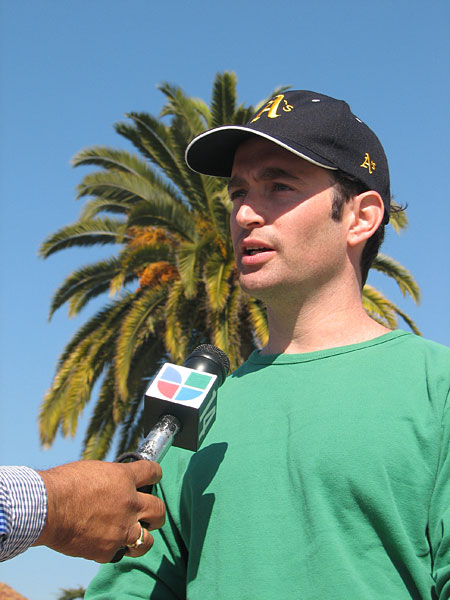 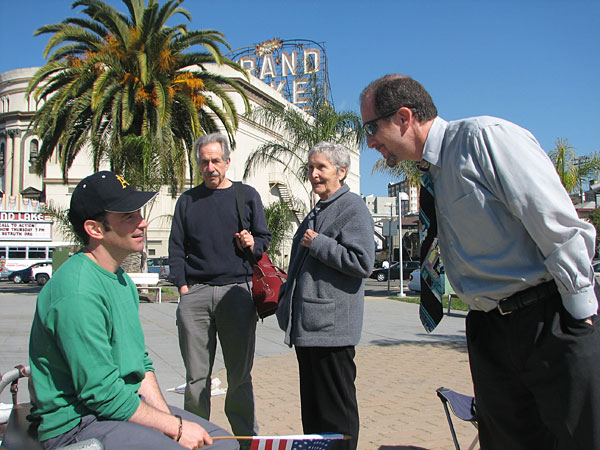 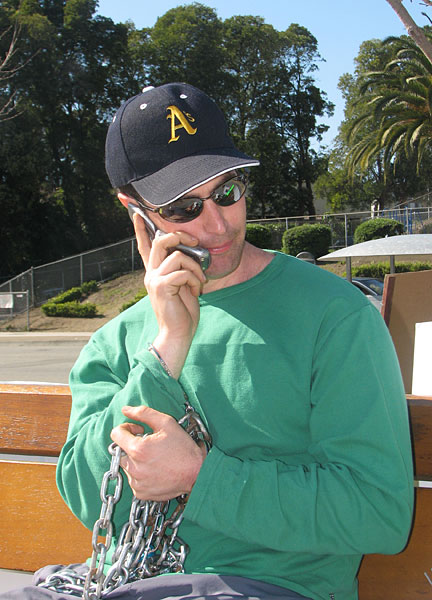 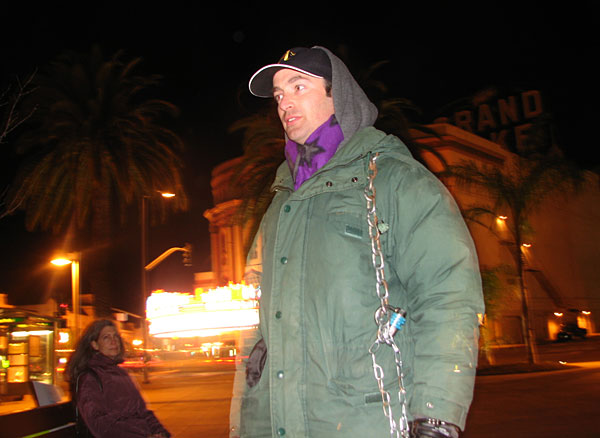 http://www.hyimvibe.com
§A dozen supporters lend their support into the evening
by Jeff Paterson, Not in Our Name (jeff [at] paterson.net) Wednesday Feb 22nd, 2006 12:11 AM 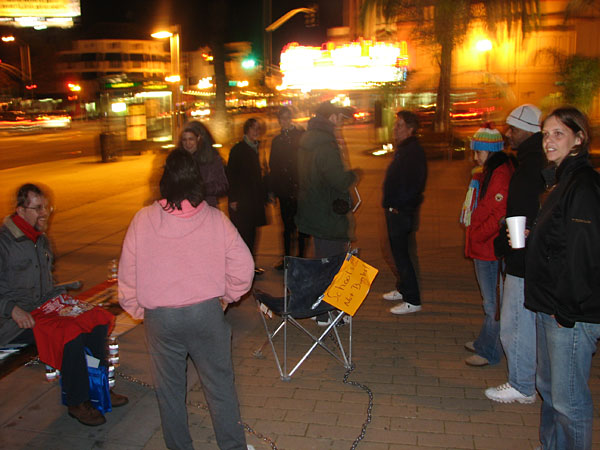 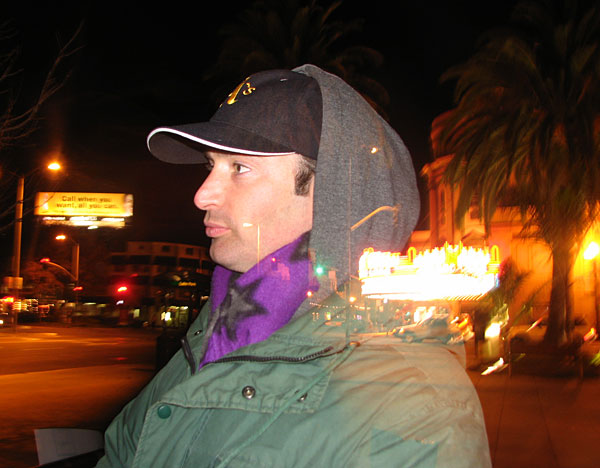 http://www.hyimvibe.com
Add Your Comments
LATEST COMMENTS ABOUT THIS ARTICLE
Listed below are the latest comments about this post.
These comments are submitted anonymously by website visitors.