by Haiti Action (reposted)
Haiti News Watch - In another dramatic infiltration of the mainstream press, Flashpoints has learned that Amelia Shaw, National Public Radio's current correspondent from Haiti, is also a reporter with the US government propaganda organization, Voice of America (VOA). By law, VOA is not allowed to broadcast on US frequencies. Shaw's reports have appeared both on Voice of America and National Public Radio in the same 48 hour period. Her reports - very much in line with the US State Department - have tried to suggest that René Preval is a troublemaker, a spoil-sport who was trying to undermine the mostly free and fair electoral process in Haiti. 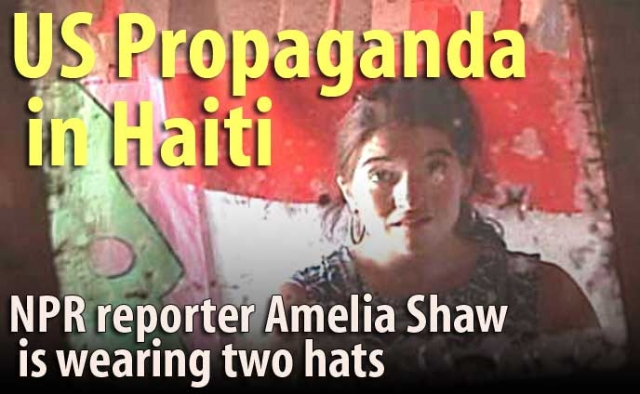 NPR's willingness to collaborate with a Voice of America reporter without revealing her connection is a text-book example of US government infiltration into the media, and represents a glaring conflict of interest.

The Voice of America reporter was also used as a source for BBC and Pacifica Radio's KPFA Evening News broadcast on Thursday, February 16, 2006.

What follows is a transcript of the story as it was broken on Pacifica's Radio's Flashpoints show oDenis Bernstein February 16th 2006. The interview is conducted by FP's Executive Prodcuer, Dennis Bernstein

Bernstein: in Berkeley, I'm Dennis Bernstein. You are listening to Flashpoints, on Pacifica Radio.

Listen to this: In another dramatic infiltration of the mainstream press, Flashpoints has learned that Ameila Shaw, NPR's current correspondent from Haiti is also a reporter with the US government propaganda organization Voice of America. Shaw's reports have appeared both on voice of America and National Public Radio over the last 48 hours.

Her reports very much in line with the State Department, have tried to suggest that RenRéne Préval is a trouble maker, a spoil sport, who is trying to undermine the mostly free and fair electoral process in Haiti. NPR's willingness to collaborate with Voice of America reporters without revealing her connection, is a glaring example of US government infiltration into the media. Into the media. That's right. Voice of America reporting for national public radio.

Meanwhile, according to some kind of shaky deal, Préval has ended up with some fifty-one percent of the vote; thus, no runoff is required.

In one moment we will go to Brian Concannon, director of the Institute for Justice and Democracy in Haiti.

But first, this short excerpt from today's NPR Morning Edition, in which hosts Steve Inskeep, is interviewing Voice of America's Amelia Shaw. It's Inskeep picking up the obviously anti-Préval line the begins this short excerpt. listen...

Inskeep: Alright. Well now that Préval has gotten what he wanted - he is going to become president - is that going to end the allegations of fraud?

Shaw: This has yet to be seen. I think what will be interesting will be the reaction of second place candidate, Leslie Manigat, who got about 12 percent of the vote. He - yesterday - called for a press conference [in the] morning. It will be interesting to see his reaction, and to see if he is going to accept this compromise. This deal that has been struck.

Inskeep: Maybe the way to put it is: Was Préval the only person who had thousands of supporters he could turn out into the street to cause mayhem?

Shaw: You know... [she laughs conspiratorially] ...yes, because there really were no signs from other people who did not vote for Préval. There was no big political protest from the people who did not support. for there had been some statements to the press from the other political candidates who have also alleged fraud. but, it will be interesting to see what the other candidates will say.

Bernstein: Alright that was NPR morning edition's host Steve Inskeep, talking to Voice of America and Nation Public Radio reporter Amelia Shaw. Now, joining us to talk about the situation in Haiti; and this is Brian Concannon, Director of the Institute for Democracy and Justice in Haiti. Brian, welcome back to Flashpoints.

Concannon: Thanks Dennis, its great to be with you.

Bernstein: Well, its good to have you with us. What is your reaction to that clip, and Voice of America reporting for National Public Radio?

Concannon: In terms of Voice of America reporting for National Public Radio, there is obviously a conflict of interest. The Voice of America is intended to be a propaganda machine to give the US Government policy, to spread it abroad. So much so, that VOA can't be broadcasted in the United States. And I think that the clip you show, does show an example of the biases that is inherent. They didn't mention in that story that RenRéne Préval had very good reasons to cry fraud. They mentioned one of them; the fact that there were a bunch of ballots found yesterday afternoon. But they didn't mention that there was a systematic effort to depress Préval's vote over the course of the last year and that is a very important piece of understanding why Préval's supporters are mad, and why they are out on the streets.

It's because that in the election, there was a sustained effort to steal the election from him in the first round, and certainly, that would continue in the second round, if they let it happen.

Bernstein: ...and a little detail that they forgot to mention also, is that there used to be 12 or 13 thousand voter polling places. That was when Jimmy Carter went and said free and fair elections; the elections that the world, at least the US presses have forgotten. I believe that we have narrowed the window down to 800 or so.

Concannon: Yes it was across the board, there were not enough voting booths. Just in comparison, Los Angeles county has about a third of the area of Haiti, and the same population; and they had 4,000 voting centers. and they have much better roads and transportation and the current government wanted to get by with 800.

The same thing happened with registration. They put more. They put as many registration offices in Petionville - which is an upscale suburb - as they did in the Central Plateau, which is a big, remote, difficult to access region.

http://haitiaction.net/News/HNW/2_17_6/2_17_6.html
Related Categories: Haiti | International
Add Your Comments
Latest Comments
Listed below are the latest comments about this post.
These comments are submitted anonymously by website visitors.
TITLE
AUTHOR
DATE
more on this story
more
Support Independent Media
We are 100% volunteer and depend on your participation to sustain our efforts!