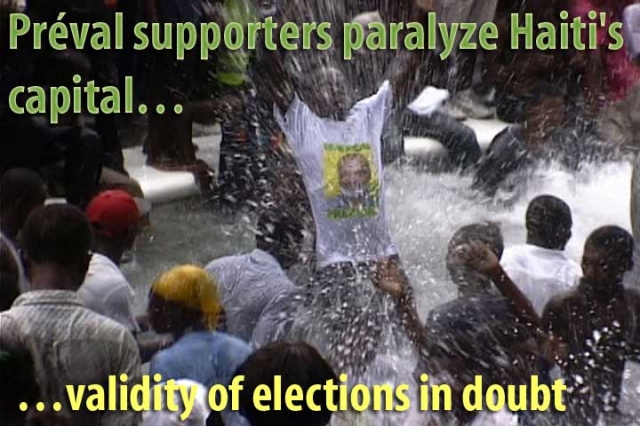 "They already stole our democracy once by kidnapping our president, now they want to steal democracy from us a second time," screamed Abner Dorelien, a 31 year-old unemployed auto mechanic. "We won't let them get away with it."

The day of protest was highlighted by a takeover in Petion-Ville of the posh Hotel Montana, currently home to the press headquarters of Haiti's electoral council. Most foreign journalists stay at the Montana where they spend more on a room and amenities in a day than the average Haitian makes in a year.

Thousands of protesters swept into the hotel, many jumping into the swimming pool as U.N. security guards and Haitian police stood watching helplessly. "I never swam in a fancy swimming pool like this!!" shouted a young man from the slum of Cité Soleil as he and nearly a hundred others frolicked and played in the warm water. Most wore t-shirts or carried signs bearing René Préval's image.

"I can't believe how they are letting them run all over the place like this," a Ft. Lauderdale Sun-Sentinel photographer was overheard saying. "What are they [the U.N.] doing?"

Haiti has experienced a period of unprecedented chaos since the forced ouster of President Jean-Bertrand Aristide on Feb. 29, 2004. An unelected and U.S.-installed interim regime has been accused of waging a campaign of terror against Aristide supporters for the past two years including summary executions, killing unarmed protestors and holding hundreds of political prisoners.

U.N. forces have also been accused of propping up the unpopular and increasingly brutal government of de facto Prime Minister Gérard Latortue and de facto President Alexandre Boniface by force of arms. The Haitian population increasing views the U.N. troops as military occupiers rather than peacekeepers.

Tensions rose in Haiti after the Conseil Electoral Provisoire (CEP), drawn entirely from political sectors hostile to Préval's Lespwa party, failed to announce election results last Tuesday as promised. Early returns showed Préval with a commanding lead that hovered well over the 50% threshold needed to win the elections in the first round. But recent figures released by the CEP shows Préval's percentage dropping to 48.7%, which would force a run-off.

The elections were already tainted. Vote rigging against Préval occurred, protestors say, when many polling stations changed locations and lacked accurate or complete voter lists. Polling stations serving predominately pro-Préval communities opened 3-4 hours late while areas expected to support his opponents opened on time, with voters there reporting few if any difficulties in casting their ballots. Thousands of people were forced to travel for hours by foot to several polling stations in search of their name on the electoral rolls. The government-run television station, Télévision Nationale d'Haïti (TNH), announced changes at the last minute.

"At the voting center at the hospital, Lapaix, located at Delmas 33, people crowded by the thousands but there was wholesale disorder, no list of names posted as announced by the Electoral Commission and the election law, no directions," Fanfan said. "It was a complicated and unaccountable situation. At area 2004 (SouPis Aviation) where the Electoral Commission without explanation had transferred the voting center for Cité Soleil, with more than 80 voting booths for 400 voters each giving a total of 3200 voters in a space designed only for 1000 people. It was the Tower of Babel, a total confusion by voters with cards in their hands searching in vain for their names.The centers in Pétion-Ville were well organized. The lists of names were posted. There were police officers and Electoral Commission officers on site to assist the people of this rich area."

As if that were not enough, there are now allegations of uncounted tally sheets being discarded at the CEP's headquarters and tampering by the council president Jacques Bernard. Two members of the CEP, Patrick Féquiere and Pierre Richard Duchemin, have already public charged Bernard with fraud.

Large demonstrations of Préval supporters threw up more barricades on Tuesday. Préval also gave a press conference asking his supporters to "continue demonstrating against the fraud" even as U.N. officials and the international community continued to laud the Feb. 7 elections as the best organized democratic elections in Haitian history.

Later in the day, reporters headed out to the Port au Prince neighborhood of La Plaine and a nearby area called Titayen. This was a notorious dumping ground for death squad victims during the Duvalier dictatorships, after the 1991 military coup against Aristide, and most recently, after the 2004 coup against Aristide. There, journalists found thousands of discarded ballots from a neighborhood where the vote was clearly expected to favor René Préval.