If you read the headline of the Sentinel this morning you already know this, but the SCPD cleared themselves of any wrongdoing in infiltrating the parade planning meetings of course.  (Police Investigation Clears Undercover Officers - SC Sentinel)

Given that the investigation was lead by Deputy Chief Kevin Vogel who made the decision to infiltrate the planning meetings, this is no surprise.  The 600-page report said that the police had every reason to monitor the group (or any group in the future) because they had public safety in mind.

If you are thinking this doesn't really truly involve you, or that you do nothing so sketchy that you'd attract police attention, consider this:  Among the 600 pages of documents in the internal investigation, the SCPD gathered intelligence on Santa Cruz Guerilla Drive-In, Santa Cruz Art & Revolution, and the Big Yellow House.

Just three example of why we do not need the police spying on our peaceful group meetings:

How do you feel about this?  Throughout the fracas I've viewed the whole thing a bit whimsically.  It seemed the SCPD cleared fucked up in monitoring a peaceful group with no evidence of criminal intent.  But after reading through the 600 pages of documents, which include photos of many of us, profiles, information from other groups, videotapes, I am truly creeped out and angry.

It is not a good feeling to know that when you do something outside of the box in a town known for its unconventionality, that the police actively work to repress and contain you.

By the way, the entire document is on file at the main branch of the Santa Cruz Public Library as well as available for copying at Kinko's on Laurel.

Two things coming up very soon that you'll have the opportunity to make your voice heard:

Monday 4pm - City Council's Public Safety Commission Meeting - rally and protest at 2pm The SCPD will present the results of it's internal investigation to the council.  Bring questions written down that you'd like the City Council to ask the SCPD.

Tuesday 4pm - City Council Police Spying Agenda Item Mike Rotkin has placed an item on the Council's agenda.  This is your chance to express your dissatisfaction with anything less than a strong City Council ordinance prohibiting police monitoring of peaceful groups

The police department will try to ram through the council a hastily-assembled one-page policy that provides no protection for people's rights.  The proposed policy gives the police the right to monitor any group in which the group or any member of the group plans any illegal activity.  This gives the SCPD the green light to monitor any type of civil disobedience, as well as peaceful groups like Guerilla Drive-In, SC Peace Coalition, the 418 Project, Bike Church, or the Last Night Parade if they felt that any member of the group planned to break any laws.  This new policy is in the internal investigation report and has the thumbs up of Chief Howard Skerry and City Manager Dick Wilson.

Say No, to Big Brother.  Keep cops out of our homes. 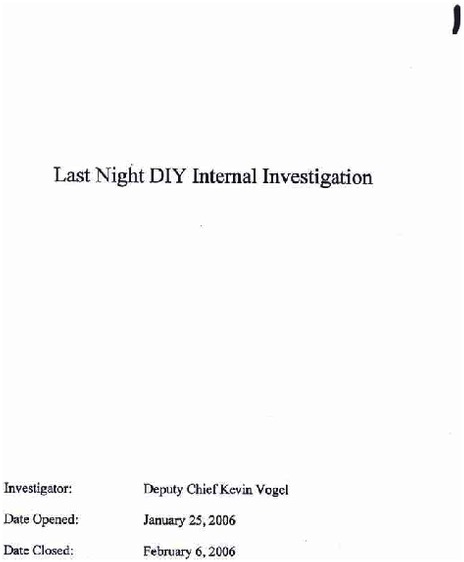 Download PDF (1.5MB)
Here are scans of the first 18 pages of the Internal Investigation report. Predictably, the SCPD concludes that it did nothing wrong and that it has the right to monitor dangerous groups such as the Last Night parade.
§Part 2 of Internal Investigation - Interviews
by Just us Saturday Feb 11th, 2006 11:37 PM 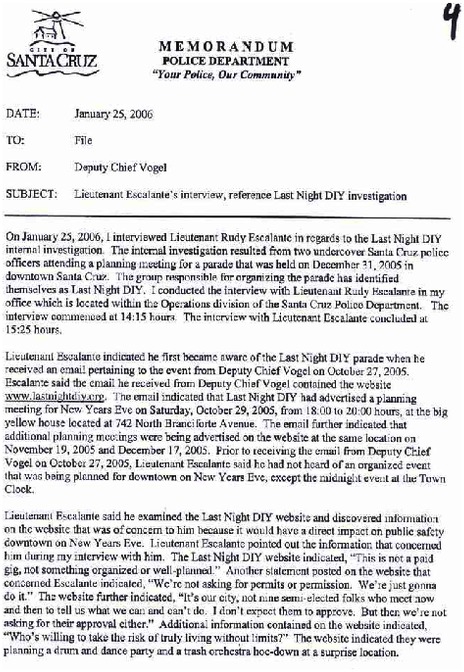 Download PDF (2.9MB)
These are Deputy Chief Vogel's interviews with Carter Jones, Wesley Hansen, Lt. Escalante, and Wes Modes. This gives a lot of the details of the investigation and infiltration. There is a good bit of CYA, and a large splash of comedy. If you are curious what kind of conclusions cops make when they sneak into your house, read on. 26 pages.
§Part 3 of investigation - reports
by just us Sunday Feb 12th, 2006 12:34 AM 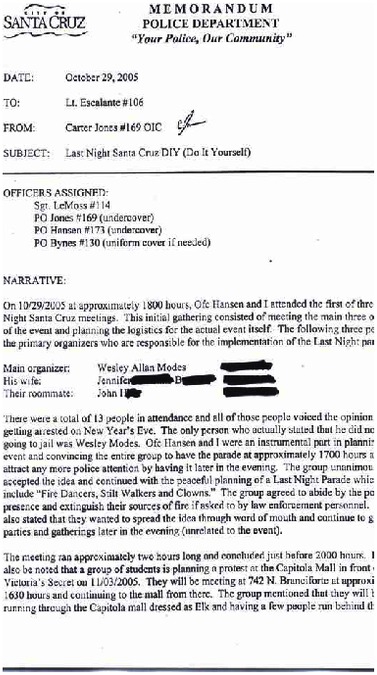 Download PDF (1.6MB)
Here are the reports from the actual dates where officers infiltrated the planning meetings. Highlights: