Add an Event
Newswire
Calendar
Features
Home
Donate
From the Open-Publishing Calendar
From the Open-Publishing Newswire
Indybay Feature
Publish to Newswire
Add an Event
Related Categories: Haiti | International | Government & Elections
Haiti: Dark storm brewing over elections
by Haiti Action (reposted)
Tuesday Feb 7th, 2006 9:18 AM
HIP - Haiti — Since a CID-Gallup poll taken in Haiti last December showed Rene Preval leading in the upcoming elections with 37%, the political forces that banded together to oust Aristide in Feb. 2004 have been organizing to contest the expected results. 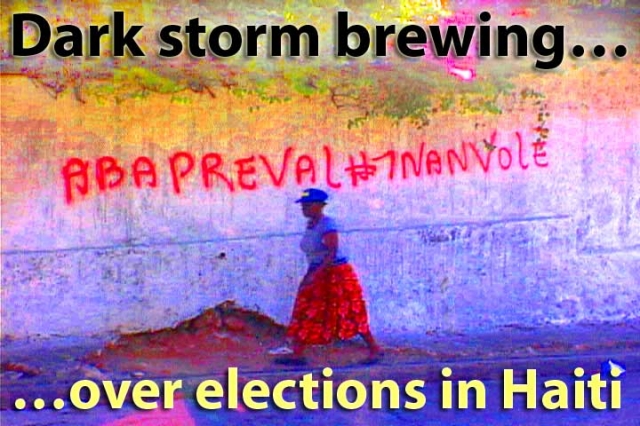 Rene Garcia Preval was the former prime minister for six months under Aristide's first administration before a brutal military coup in September 1991. An agronomist educated in Europe, he is also a former president of Haiti whose term ran from 1996 to 2001.

Preval's closest rival, Charles Henry Baker, is a wealthy sweatshop owner and a co-founder of the Group 184, a so-called civil society organization that helped to overthrow Aristide and was heavily funded by the United States, France and Canada through an intriguing web of foreign non-governmental organizations (NGO's).

What the CID-Gallup poll inadvertently exposed was the true numbers and strength of the movement that ousted Aristide. While the opposition to Aristide was portrayed in the press as a broad movement with widespread public support, the poll shows the political parties that led the movement are mostly polling in single digit numbers and combined represent less than 30% of the electorate. The major candidate representing the movement, Baker, is only polling at 10%.

On the eve of the elections, what is equally clear is that the majority of Preval supporters are drawn from the same base of the electorate that supported Aristide and his political party known as Lavalas. It is comprised mostly of peasant farmers in the countryside and urban slum dwellers in Haiti's major cities.

Recent statements by Preval indicate that he will not interfere if Aristide wants to return to Haiti as a private citizen. This has incensed the political forces that worked to oust Aristide and who are now clamoring to make tomorrow's election a referendum on the question. They are unfortunately running against the grain of another poll conducted from Nov. 6 to Nov. 16, 2005. The Democracy Group conducted the poll for the National Organization for the Advancement of Haitians (NOAH), an organization known for its hostility against Aristide and his Lavalas party. The results concluded that 51% of the respondents support Aristide's return to Haiti.

Perhaps more menacing, and a portent of things to come, is a recent editorial entitled "Reconstructing the Lavalas Anarchy" written and circulated by Raoul Peck. Peck is the writer/director of the film Lumumba and HBO's Sometimes in April (2005). He served as Haiti's Minister of Culture from 1995 until 1997. In a virulent diatribe Peck writes, "Is the UN commitment to support the restoration of democracy in our country only lip service? Is the botched electoral process that our friends are endeavoring to shove down our throats "no matter what" consistent with the generous plans laid out by the UN Secretary-General for Haiti in the aftermath of the Aristide's downfall?"

Peck concludes with the threat, "The International community did not learn the lesson of Aristide's dismissal. They continue to call instability what is after all the historical capacity of the Haitian people to get rid of whoever is trying to take advantage of them. And it has a name: Resistance."

Peck represents the intellectual tendency of those behind the forced ouster of President Aristide in Feb. 2004. His sentiments are currently being echoed in hundreds of letters currently circulating on the Internet to plant the concept of "resisting" the outcome of the elections if Preval wins as expected.

What all of this really shows is that the so-called "forces of democracy" that overthrew Aristide, and were backed by the United States, France and Canada, were anything but democratic. They were actually a minority of spoilers, a paper tiger and a creature of the media.

Peck's diatribe exposes that, not unlike the history of U.S. foreign policy in the region, those who ousted Aristide are only willing to accept the principals of democracy if it results in elections that bring victory to candidates that represent their own political views and interests. It is an all or nothing political mentality that led Haiti into this current mess and unfortunately it shows no signs of changing.

http://haitiaction.net/News/HIP/2_6_6/2_6_6.html
Add Your Comments
Support Independent Media
We are 100% volunteer and depend on your participation to sustain our efforts!