(Video Trailer and 3 Audio PSAs are Below!) 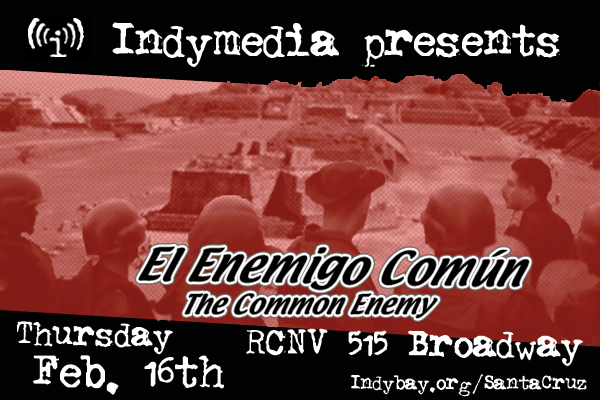 Directed by Simon Sedillo, El Enemigo Común scratches beneath the surface of neoliberalism, and looks at some of the most hidden atrocities in recent North American history. The film documents instances of paramilitary activity against indigenous communities in Oaxaca, Mexico from 2002 through 2005, and includes footage of protests in Cancun against the World Trade Organization, and in Miami against the Free Trade Area of the America's. The three locations in isolation expose the disparities in North American resistance movements, but also bring us closer to understanding the nature of an emerging common struggle.

Tear gas, rubber bullets, and direct actions are the setting, interwoven with compelling voices who expose the extremes of these acts of modern political repression. The film challenges what we already know about paramilitary activity in Mexico, US involvement, and the current face of resistance against human indignity and injustice in North America today.

El Enemigo Común is both an introduction to some of the many ignored resistances in North America, and an urgent call to action for international civil society, to stand in solidarity against state sponsored repression and for human peace, dignity and justice, in Oaxaca, Mexico. The film provides a historical context for the current violent
incarnation of capitalism and empire, and provokes action against it as a common enemy.

$5 Suggested Donation. No one turned away for lack of funds.

Over the Course of the last four years, Simon Sedillo of the Austin Independent Media Center has been working to expose the devastating impact of neoliberalism in Oaxaca, Mexico. In August of 2001, along with another collective member Jeffery Lazar, Sedillo embarked on a journey to southern Mexico. During the following years, Sedillo would visit Oaxaca on multiple occasions building trust among organizers and community members. In the summer of 2002 Sedillo and Lazar returned to Oaxaca and participated as independent human rights observers for the newly formed organization COMPA, or the Oaxacan Anti-neoliberal Popular Magonista Coordination, during a three month long permanent sit-in at the Oaxacan State Capitol.

The sit-in was intended to highlight institutionalized paramilitary activity and arbitrary detentions in Oaxaca, in particular the May 2002 Agua Fria Massacre where 26 indigenous peasants from Santiago Xochiltepec were assassinated and 17 others from Santo Domingo Teojomulco were detained as scapegoats for the murder. The sit-in in Oaxaca City demanded the liberation of those falsely detained, including grade school children, a 69 year old woman and an assortment of innocent men. Throughout the duration of the sit-in COMPA used escalating direct action tactics to demand the release of their prisoners and the persecution of the real murderers. After three months of struggle COMPA set its sights on the Independence Day celebrations in Oaxaca City and threatened to block the governor's "Grito" or celebratory battle cry, a 200 year old tradition. On September 11th, 2002, Sedillo along with 4 other US citizens, was detained at the Oaxacan state capitol, and given 3 days to leave the country, for violating Mexican Federal Law by participating in political activities as a foreigner.

In September of 2003, Sedillo along with many others, attended the 5th Ministerial Conference of the WTO or World Trade Organization in Cancun, Quintana Roo, Mexico, in order to document demonstrations there against the most powerful countries in the WTO. There Sedillo was introduced to independent videographer and human rights activist Jessica Lawrence. The protests would render Sedillo and Lawrence with unforgettable images of international solidarity against the impunity of a global empire.

The following November, 2003, Sedillo along with Eric Paulus and Brent Perdue, attended demonstrations at the Free Trade Area of the America's (FTAA) Summit in Miami, Florida. There the three documented unprecedented amounts of police brutality, and contributed to exposing a media black out and cover up of the week's events.

From 2002 - 2005 Sedillo maintained a working relationship with COMPA communities and contributed to an international campaign for the liberation of the Teojomulco prisoners. With the help of The Austin Independent Media Center, Indymedia.org, The Rhizome Collective, Dr. Noam Chomsky, and many dedicated others, Sedillo's work contributed to the release of all 17 Teojomulco Prisoners, and three additional COMPA organizers detained for political motives in 2004, under false pretenses.

In 2005 Sedillo, Paulus, and Perdue returned to Oaxaca as the Austin Independent Media Center and followed up on four years of hard work. The team updated COMPA's story with the most recent acts of repression committed against their communities, as well as with interviews of the now liberated Teojomulco prisoners. In collaboration with COMPA, the Austin Independent Media Center, and the Rhizome Collective, Sedillo produced a film, which brings all of these stories together in an amazing exposé of neoliberalism, and some of its most recent atrocities in North America.

Today Sedillo is a member of the Rhizome Collective, the Austin Independent Media Center, The Youth Liberation Network, and Caracol el Machete and his work with each one of these organizations has given fruit to a variety of local and international projects associated with self empowerment and human rights. With the help of the Student Farm-worker Alliance (SFA) Sedillo is currently touring "el enemigo común" to universities across the US, and will begin a European tour in April 2006.

The tour has 4 basic goals:

3- Organize a campus based student group to engage in solidarity organizing with indigenous groups in Oaxaca, Mexico: Letter writing, Solidarity actions at the Mexican Consulates and the Embassy, and eventually sending human rights observation teams to go to Oaxaca and work.

2- Raise money for the COMPA's in Oaxaca through the sale of merchandise, and through any extra money earned from Honorariums and benefits.

1- Raise general awareness to the plight of indigenous groups in Oaxaca, and discuss neoliberalism and traditional mesoamerican indigenous principles of unity and resistance.