Santa Cruz, CA - Members of Students Against War (SAW) met with the University of California, Santa Cruz (UCSC) Chancellor Denice Denton and other senior officials Tuesday to discuss the Pentagon spying scandal and the future of free speech on the UCSC campus.

In December of 2005, a 400-page document obtained by MSNBC revealed, amongst many things, that the Pentagon spied on 10 peaceful college protests. UC Santa Cruz’s counter-recruitment protest of April 5, 2005, organized by SAW, was the only one of these ‘incidents’ labeled both “credible” and a “threat.” It was also the only college-related ‘incident’ to be spied on by the Army’s 902nd Military Intelligence Group.

In the Tuesday meeting between students and administrators, the foremost of the concerns addressed was the possible university involvement in undercover surveillance of student activities. SAW presented the administrators with a 34-page document detailing many of the suspected incidents of covert surveillance, intimidation and first amendment violations that students had experienced on campus in the past year. Incidents ranged from police infiltration of protests and meetings to students being singled out due to their political activity. To verify these allegations, students proposed that the UCSC Administration conduct an internal investigation of campus and local officials that may have been divulging students’ personal information or releasing information on political activity to local or federal authorities. The students also sought the support of the administration in any follow-up actions.

Furthermore, SAW reiterated a request for the Administration to join the Forum for Academic and Institutional Rights (FAIR), currently involved in the FAIR v. Rumsfeld case, which would overturn the controversial Solomon Amendment – a law that limits the University’s ability to prevent discrimination by mandating military recruitment on campus at the risk of losing federal funding. By limiting Universities’ options, the law restricts important 1st Amendment rights.

Chancellor Denton promised to follow up on all the issues presented, which SAW members pledged to ensure.

“UC Santa Cruz has long been a bastion of freedom of speech and campus activism and we are hopeful that the administration will do everything in their power to keep it that way,“ said second-year student, Kot Hordyński, who was present at the meeting. 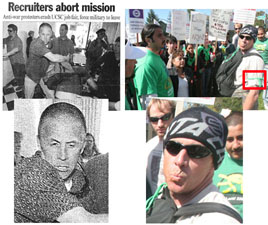 Believed to be Brian Hughes from UCSC's Police. The green armband was worn by April 14th AFSCME strike supporters. His wearing it marks him as an infiltrator. He was also seen on the April 5th counter-recruitment action tossing around students, and during the first night of Tent U. videotaping students.

See:
WANTED -- INFORMATION ABOUT UNDER-COP
http://santacruz.indymedia.org/newswire/display/17474/index.php
Add Your Comments
LATEST COMMENTS ABOUT THIS ARTICLE
Listed below are the latest comments about this post.
These comments are submitted anonymously by website visitors.