Did the Marin Telecommunications Agency (MTA) Violate the Brown Act?

by david mathison (david [at] bethemedia.org)
Marin Telecommunications Agency (MTA) Chairman Dan Hilmer of Larkspur brought a motion to adjourn the regularly scheduled meeting of the MTA 40 minutes early, effectively cutting off public comment, in spite of the fact that there was a standing-room-only crowd of people expectantly waiting to speak to their local representatives about the agreement. Video clip is just under 2 minutes. 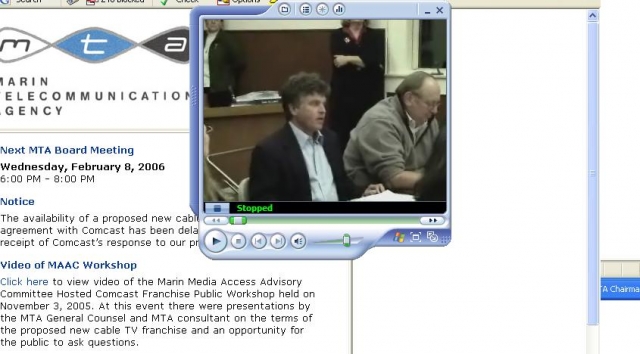 Concerned local residents were outraged at the tactics of Marin Telecommunications Agency (MTA) Chairman Dan Hilmer of Larkspur. A packed crowd turned out on Wednesday night, January 11, 2006 to give public input to the cable franchise agreement between Marin and Comcast.

Chairman Hilmer brought a motion to adjourn the meeting 40 minutes early, thereby cutting off public input from the standing room only crowd of concerned citizens, seniors, minorities, the disabled, and people of faith from all areas of Marin. Some in the audience felt that this may have violated the Brown Act.

Executive Director Marty Nichols never alerted the public to the fact that the meeting would be cut short. To add insult to injury, the MTA's own website today, January 15, 2006, indicates that the next meeting is scheduled for February 8, 2006, instead of January 25th! It seems that someone doesn't want the residents of Marin coming to the important January 25th meeting. Why, you might ask? Because that is when the MTA will finally unveil the proposed cable franchise agreement to the public - an agreement that Marin has been waiting over six years to see. Mr. Hilmer has been Chairman for almost eight years - practically a dictatorship of non-action!

Click on the video below or go to http://www.bethemedia.org/2006/01/did_the_marin_t.html to watch the exclusive video of all the action!
END_OF_DOCUMENT_TOKEN_TO_BE_REPLACED
Related Categories: North Bay / Marin | Media Activism & Independent Media
§MTA meeting January 11, 2006
by david mathison (david [at] bethemedia.org)
Copy the code below to embed this movie into a web page:
Download Video (7.7MB) | Embed Video
END_OF_DOCUMENT_TOKEN_TO_BE_REPLACED
Add Your Comments
Comments (Hide Comments)
§Meeting
by Anon.
I was at this meeting, and although some may feel angered by not being able to speak, the Larkspur City Council had a scheduled meeting in the City Hall at 7:30. This article makes it seem as though Hillmer was just cutting people off because he didn't want to listen to them, when in fact the chamber they were meeting in wasn't his to dictate in the first place.
Add a Comment
Support Independent Media
We are 100% volunteer and depend on your participation to sustain our efforts!