Add an Event
Newswire
Calendar
Features
Home
Donate
From the Open-Publishing Calendar
From the Open-Publishing Newswire
Indybay Feature
Publish to Newswire
Add an Event
Related Categories: Peninsula | Santa Cruz Indymedia | Environment & Forest Defense
Elephant Seals Mate and Relax at Año Nuevo
by ~Bradley (bradley [at] riseup.net)
Tuesday Jan 10th, 2006 2:26 PM
A large colony of northern elephant seals are currently mating and taking life easy at Año Nuevo State Reserve. The Reserve is located off Highway 1, between the cities of Santa Cruz and Half Moon Bay, on a beautiful stretch of the southern San Mateo County coastline. On January 4, 2006, I took a guided tour of the Wildlife Protection Area of the Reserve and saw lots of cute elephant seal pups and their parents. 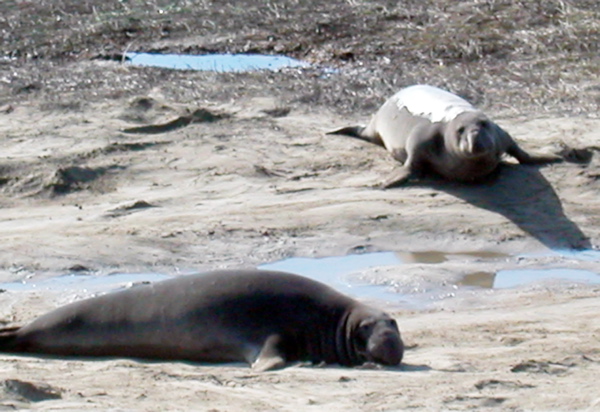 According to the California Department of Parks and Recreation, "Adult seals begin arriving on the beaches by mid-December. Bulls (adult males) weighing up to 5,000 pounds engage in battles for breeding access to the females. Pregnant females come ashore to have pups beginning in mid-December, with births reaching a peak by late January. Mothers nurse their pups for about a month before weaning their pup, mating, and departing back to sea. Birthing and mating activity peak by mid February and by early March most adult seals have returned to the sea. During March, hundreds of weaned pups remain behind to rest in the dunes and learn to swim in the tide pools."

Año Nuevo State Reserve is a great place to see elephant seals. The other places in California you can find them are San Simeon on the central coast, the Channel Islands in southern California and Drake's Beach in Marin. Elephant seals travel south to Mexico and north to Alaska.

SealExperience.com states that elephant seals are fascinating for several reasons:

* Elephant seals are big. The largest known Elephant seal is 18 feet (about 2 car lengths), weighing 6000 pounds (2 large trucks). They are the largest pinniped in the world, even bigger than the walrus.

* Elephant seals are the most sexually dimorphic of all mammals. An alpha bull will mate with up to 50 females.

* Elephant Seals will go without food for three months during the mating season.

* Elephant Seals migrate further than any other mammal in the world, traveling over 6000 miles.

* Elephant Seals are pelagic, they spend 80-90% of their time underwater.

* Elephant Seals are indifferent towards humans. We can visit their rookeries and get close-up views of their daily life. [Stay more than 25 feet away from elephant seals at all times. Otherwise, you can hurt them, or they can hurt you.]

* Elephant Seals congregate onshore at rookeries to fight for dominance, give birth, nurse, and mate during the winter breeding season. They'll play, sleep, and shed their fur in the spring and summer molting season.

* Elephant Seals are amazing divers. They are the deepest divers in the ocean, with a maximum depth recorded at 5,015 feet.

* Elephant Seals can hold their breath longer than any other mammal. They typically dive up to 20 minutes, but can stay underwater for more than 80 minutes. That's a record for mammals.

* Elephant Seals were mercilessly hunted for their blubber and were on the verge of extinction. By the late 1800's, the population was down to 100. Today, the estimated population is 130,000.


There are many informative websites about Northern Elephant Seals. 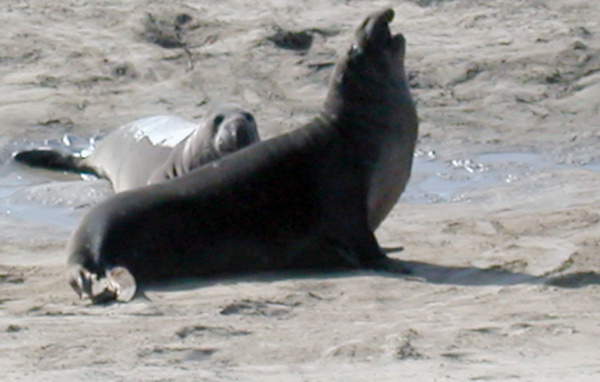 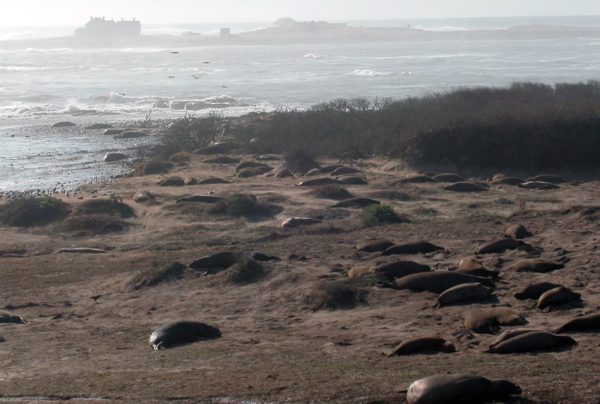 The Spanish maritime explorer Sebastian Vizcaino sailed by the point on January 3, 1603. His diarist and chaplain of the expedition, Father Antonio de la Ascension, named it Punta de Año Nuevo (New Year's Point) for the day on which they sighted it in 1603. Vizcaino did not mention anything about an Año Nuevo Island. The island was formed after Vizcaino wrote about Año Nuevo through years of water erosion to the point.
§Sleepy elephant seal
by ~Bradley (bradley [at] riseup.net) Tuesday Jan 10th, 2006 2:26 PM 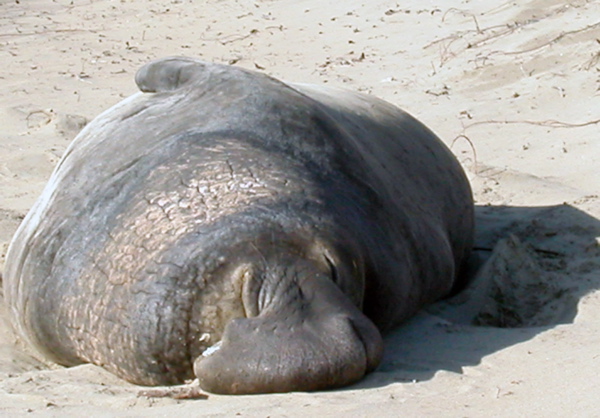 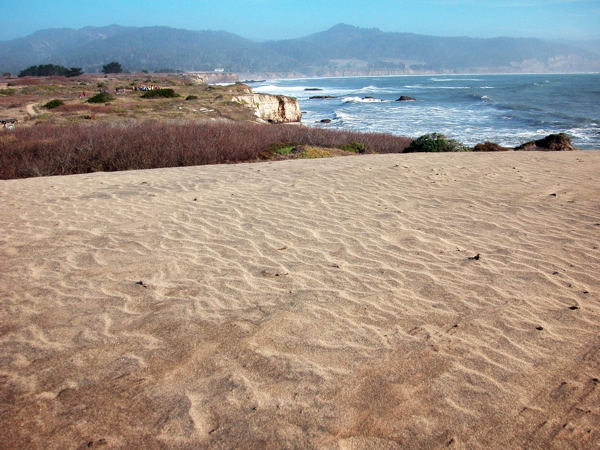 §Great photos!
by Vinny
Tuesday Jan 10th, 2006 9:32 PM
I'm going there next week!!! I can't wait to see these awesome creatures in person! Thanks for the inspiration...
Add a Comment
Support Independent Media
We are 100% volunteer and depend on your participation to sustain our efforts!