Add an Event
Newswire
Calendar
Features
Home
Donate
From the Open-Publishing Calendar
From the Open-Publishing Newswire
Indybay Feature
Publish to Newswire
Add an Event
Related Categories: U.S. | Anti-War
Cindy Sheehan's Message For the New Year
by link to Truthout Perspective
Thursday Dec 29th, 2005 12:08 AM
Cindy Sheehan: "Like Michael Moore, I want to be a fly on the wall when Bush and company are hauled out of the White House in handcuffs. Impeachment is not necessary for people who never were elected - eviction is what is needed. If you can't join us in Crawford, set up your own Camp Casey near you." 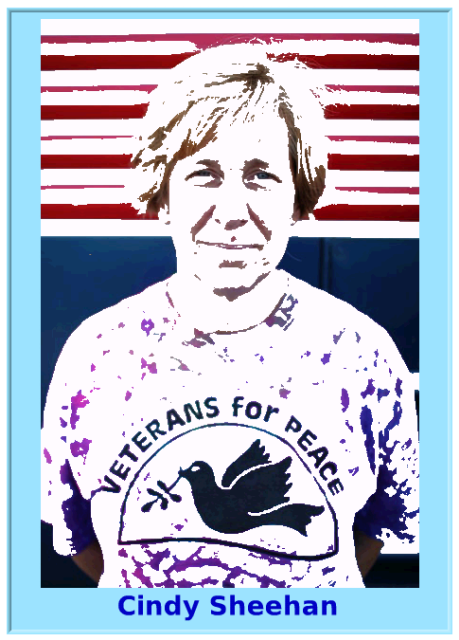 2006: The Year the Chickenhawks Will Go Home to Roost
By Cindy Sheehan
t r u t h o u t | Perspective

Since hot, hot Camp Casey in August, some amazing grass roots actions have taken place all over the country. People are starting to speak up and Congress has begun to take action against the criminal and neo-Fascist regime that tried to take over America.

From Camp Casey, to Katrina, to use of chemical weaponry and extraordinary rendition, to illegally spying on American citizens without due process, BushCo has miserably failed our country and the world. We as Americans said "enough is enough." We sacrificed a lot when we showed up in DC and other cities around the country in the hundreds of thousands to protest and show that we withdraw any consent to be governed by murderous thugs. We started to peacefully but forcefully resist the notion that this government has any right to govern us when they have betrayed their offices and their sacred trusts as "defenders" of the Constitution so horribly.

This was also the year that we also began to hold such Republicans in Democratic clothing like Hillary Clinton, Joe Lieberman, Joe Biden, and Diane Feinstein (list is my no means all inclusive) accountable for their support of what George is doing in Iraq. When we as Democrats elect our leaders we expect them to reject and loudly repudiate the murderous and corrupt policies of this administration, not support and defend them.

There are Camp Caseys in front of Hillary's and Chuck Schumer's offices in Long Island every Friday, as well as one in front of Diane Feinstein's Los Angeles office on Fridays. There has been a Camp Casey in front of Kay Bailey Hutchinson's office in Dallas since August. Several protestors have been arrested in Dallas exercising their First Amendment rights. We need to let these warmongers, as well as the Republican warmongers, know that we mean business when we say "bring them home now." Set up Camp Caseys in front of your Senator's or Congressperson's office if they support George in his wars of aggression.

Gold Star Families for Peace is planning many activities for the first part of 2006. I would like to give you all a heads up on them so you can make your plans accordingly to support us and to join us if at all possible.

On January 31st, we will be in Washington, DC for the State of the Union address when George gets in front of Congress and the world and lies through his teeth about how great everything is going in Iraq and here at home. His idiotic policies have ruined Iraq and New Orleans and made the world a more dangerous place - allowing that terrorist attacks have tripled world wide since he decided to "fight them over there." He also may be laying the ground work for further acts of needless aggression against Syria and Iran. GSFP and representatives from other peace organizations and refugees from New Orleans will be gathering in DC to give the "Real State of the Union." Check our website for place and time.

For the love of God, can't you make him stop? Recently, it was revealed that George only interacts with four people: Laura, Condi, Karen Hughes and his mom. His mom, the Ice Queen who didn't want her "pretty mind" burdened with the images of flag draped coffins coming home, lives in Houston. On President's Day, (Feb. 20) we will be demonstrating in front of her house to implore her to forget about the obscene profits that her family and their friends are making off of this occupation and to beg her to finally do the right thing and make her son stop this insane war of terror against the world. George and Dick are defiling the highest offices of the world and they need to resign. On President’s Day, when we have the day off, we need to demonstrate against the ones who are illegitimately in power, anyway. If you can't make it to Houston, organize your own President’s Day protest.

The Camp Casey Peace Foundation will hold its first annual Peace Festival and Concert on April 4, 2006. April 4th is the day Casey and Martin Luther King, Jr. were killed. We want to turn it into a true day for celebrating peace. The Camp Casey Peace Foundation will be awarding the Casey Sheehan Peace Prize, a cash prize, to a young peace activist every year. We want to foster the growth of solving problems non-violently and young people are the ones who get killed in the gray haired old men's wars. We are working on an exciting event and we will announce more details as the event draws closer.

Camp Casey Easter edition: We will be heading back to our leased land in Crawford April 11th for Easter, which is April 16th. Easter is a time of renewal and hopeful promises. Casey was killed on Palm Sunday and his body was returned to us in the cargo section of a United Airlines flight on Holy Saturday and we buried him two days after Easter. Last Easter Season was so painful to us. This Easter we will again be demonstrating in front of the man's home who is responsible for such pain and abject heartache in the world. But, we will be there with a renewed sense of hope that the Chickenhawks will be sent out to pasture this year. Like Michael Moore, I want to be a fly on the wall when Bush and company are hauled out of the White House in handcuffs. Impeachment is not necessary for people who never were elected - eviction is what is needed. If you can't join us in Crawford, set up your own Camp Casey near you.

We learned that one person can and does make a difference.

We cannot relax in 2006. We cannot slip back into the evil of apathy and complacency that the neocons rejoice in. We need to keep pounding, working, and fighting. We need to support organizations like Gold Star Families for Peace, Veterans for Peace, Code Pink and Iraq Veterans Against the War, or the Peace organization of your choice so we can continue our struggle for peace with justice. We need to support true American patriots like John Conyers who is calling for an investigation and censure for the lies that have cost us so much of our national human treasure.

2006 will be a great year for the people of our country. I know it.

It won't be easy, but we will prevail and the struggle will be worth it.
http://www.truthout.org/docs_2005/122805A....
Add Your Comments
LATEST COMMENTS ABOUT THIS ARTICLE
Listed below are the latest comments about this post.
These comments are submitted anonymously by website visitors.