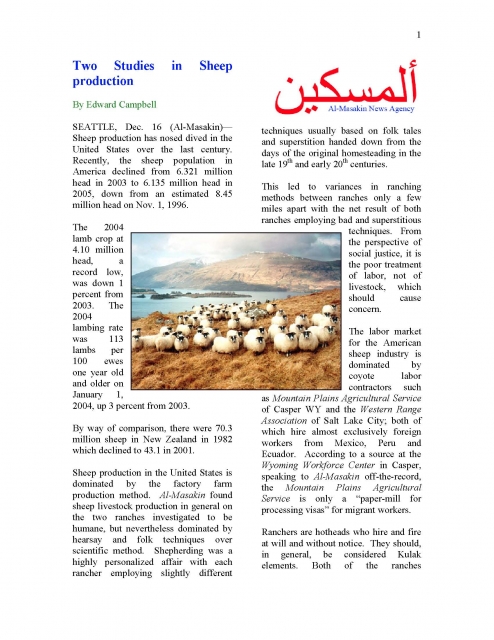 Sheep production in the United States is dominated by the factory farm production method. Al-Masakin found sheep livestock production in general on the two ranches investigated to be humane, but nevertheless dominated by hearsay and folk techniques over scientific method. Shepherding was a highly personalized affair with each rancher employing slightly different techniques usually based on folk tales and superstition handed down from the days of the original homesteading in the late 19th and early 20th centuries.

This led to variances in ranching methods between ranches only a few miles apart with the net result of both ranches employing bad and superstitious techniques. From the perspective of social justice, it is the poor treatment of labor, not of livestock, which should cause concern.

The labor market for the American sheep industry is dominated by coyote labor contractors such as Mountain Plains Agricultural Service of Casper WY and the Western Range Association of Salt Lake City; both of which hire almost exclusively foreign workers from Mexico, Peru and Ecuador. According to a source at the Wyoming Workforce Center in Casper, speaking to Al-Masakin off-the-record, the Mountain Plains Agricultural Service is only a “paper-mill for processing visas” for migrant workers.

Ranchers are hotheads who hire and fire at will and without notice. They should, in general, be considered Kulak elements. Both of the ranches investigated by Al-Masakin used a mixed methods. Both were part factory farm and part open range based.

Round Grove Ranch hires a mish-mash of laborers both from God’s Love homeless shelter in Helena and from the Helena Job Service They hire mainly Mexican and White labor. The ranch foreman Kelly Ingalls also hires through the Peace Corps “Hotline” classified ads and shows preferential treatment to former members of the Peace Corps.

Round Grove Ranch pays the least of all ranches we know about at $650.00 per month. They treat their laborers worse than the livestock. Accommodations are an old travel trailer or a bunk house. Electricity may be supplied to the travel trailer by an electric extension cord and both the bunk house and the travel trailer are heated by wood burning stove. Laborers are expected to wash their clothes in a bucket and dry them on a close line or near a fire.

Meals are served in the ranch house. Lunch is usually available while dinner is usually the leftovers from lunch and breakfast is self serve. Labor is treated worse than livestock which is generally bad at this cheap outfit.

Livestock afflicted with pregnancy toxaemia, round worm, botulism, and pneumonia. Approximately, 50 ewes lost to these diseases during the April 2005 lambing season with more than 100 lambs lost during the same period.

Ewes are trailed onto the open range in two bands at 1000+ ewes, with their lambs, in May followed by another 1000+ ewes with their lambs trailed in June. Range includes US Forest Service ranges in the Belt Mountains and a BLM winter range on Canyon Ferry Reservoir.

Miller Ranch, Harlowton, MT
Miller Ranch has approximately 2300 Rambouillet ewes. Miller Ranch hires mostly white workers and women and pays better than Round Grove Ranch at $800.00 per month. Accommodations are a sheep wagon near the lambing shed with an electric extension cord, heated by a wood stove.

Workers are expected to wash clothes in a bucket. All meals are self-serve by cooking in the sheep wagon. Food cost is paid by the worker. Both the livestock and the workers are better kept on the Miller Ranch than on the Round Grove Ranch.

The main difference between the two ranches from the perspective of the laborer is that Miller Ranch splits the band into two parts. Settling approximately 1300 followed by another 900 three weeks later, makes their lambing season six weeks long instead of only three weeks; whereas Round Grove Ranch brings the whole band of 2300 ewes to term all at once within a three week period.

Unfortunately, aggressive herding practices by ranch hands on four-wheel ATVs contributed to the deaths of many lambs still inside the womb, which frequently also kills the ewe herself. Miller Ranch lost approximately 30 ewes to 2500 and more than 50 lambs within the same period. 1500 pregnant ewes are fed 4 x 1000lbs alfalfa bails which is supplemented by alfalfa cake in the afternoon and pellets while in the jug. Ewes are trailed in June on 4000 acres leased from the Haymaker Ranch near Two Dot and on US Forest Service Ranges in the Little Belt Mountains. Miller Ranch was by far the better of the two.

Johnson County, WY
Once the wool producing capital of the world, Johnson County, WY now only has one major sheep ranch in Buffalo, WY and three ranches in Kaycee, WY. With 100% of the workers from the largest sheep shearing operation in western states off the Meike and Curuchet ranches in Kaycee being hired from New Zealand, American workers have been effectively closed out of the shepherding and shearing labor market throughout the American west.

Geography
The best grass ranges in descending order are off I-90 between Buffalo Gap National Grassland to Vivian, SD; on the Blacktail Mountain range off I-15 between Lima and Dillon, MT; In the Powder River Basin along I-25 between Buffalo and Casper WY. Grass ranges in Eastern Oregon are exceedingly dry during the summer months, but could be an excellent winter getaway.

In the late 19th and early 20th centuries sheep were trailed in Arizona during the winter months and were herded all the way northward into southern Idaho, eastern Oregon, eastern Montana and Wyoming by summer. As autumn approached the herds were turned around and lead back to warmer climes. Now that barbed wire fences and private property dominate what was once a continuous open range, sheep ranchers are forced to either graze their livestock on unsuitable range part of the year, or to truck them by 18-wheeler to greener pastures when the weather is too hot or too cold on their home ranges. At the beginning to the 20th century there were an estimated 5 million sheep in Montana with another 5 million in Wyoming, 3 million in Idaho and 4 million in Oregon. Montana now has a mere 500,000 head of sheep with Wyoming ranges supporting another pitiful 400,000 head. Texas and California are now the biggest producers of sheep in America through the factory farm method.

Problems and Solutions
The main problem with shepherding as a profession in the United States, and what has in fact nearly destroyed the sheep industry here, is the lack of both a traditional shepherding lore based on Halal shepherding techniques and the supplanting of pastoralism by the factory farm and symbiosis being replaced by greed driven production.

Though American sheep ranchers do base themselves on some kinds of folklore, it is an incorrect folk culture. After the buffalo were cleared of the American plains, livestock speculators upon seeing the abundant grasses of the American west herded sheep by the millions into Montana, Wyoming, Idaho and Oregon. Unfortunately, these speculators were not shepherds by any possible definition of the word and did not hire real shepherds to care for them, hence livestock raising techniques tended to develop randomly and unwisely.

One technique propagated in the American west, for instance, stipulates that castration of lambs by means of a knife, or by shears, causes tetanus. In Montana, for instance, shepherds were required to castrate newborn lambs by biting their testicles off and spitting them into a pail as recently as the 1980’s although scientific researchers had discovered that lambs were acquiring tetanus through their green navel cord while laying the grass. The tetanus virus was being transmitted in the hooves of horses which were grazed in the same pasture as sheep. Miller Ranch responded to a tetanus out break by selling the horses on the ranch, while Round Grove Ranch, only 90 miles away, continues to believe that castrating by the rubber ring method prevents tetanus and as yet continues to keep horses on the ranch while, at the same time, requires shepherds to clip the green navel cord on the new born lamb with rusty sheep shears.

While castration is completely unnecessary for any veterinary reason, and is prohibited under the Islamic Sharia, both ranches wrongly believe that castration of male lambs actually helps the lamb gain weight. While this is true for cows, it has the exact opposite effect on sheep. That is only one example of the numerous errors made by Montana sheep ranchers. When these ranchers were informed about better ranching techniques, this reporter could only get the characteristic reply of the western ignoramus: “You can’t learn nothin’ from a book.”

Since the labor coyotes completely dominate the labor pool, American workers interested in becoming professional shepherds will need to purchase their own livestock. Since the price of land for ranching is prohibitively high in the United States, would be shepherds will be forced to rely on whatever free grass they can obtain, i.e., on the open range.

The solution to the crisis in the American sheep industry would be for progressive people, using collective management methods, to move away from the factory farm and actually put more bands of sheep onto the open ranges of South Dakota, Wyoming, Montana and Oregon. 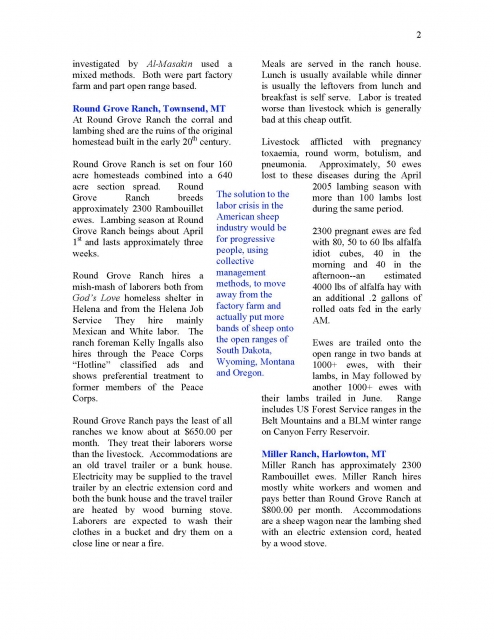 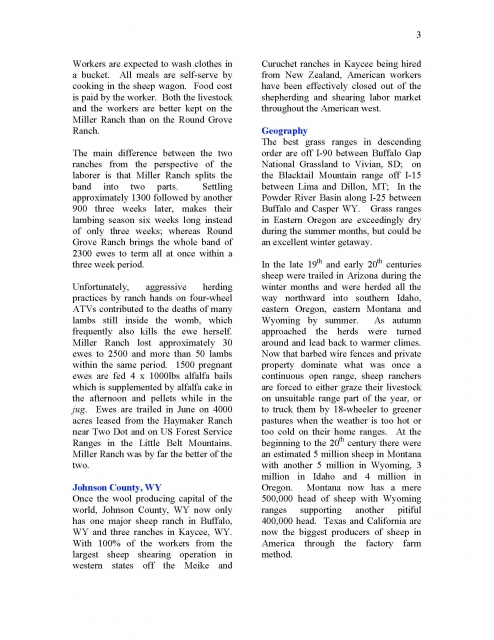 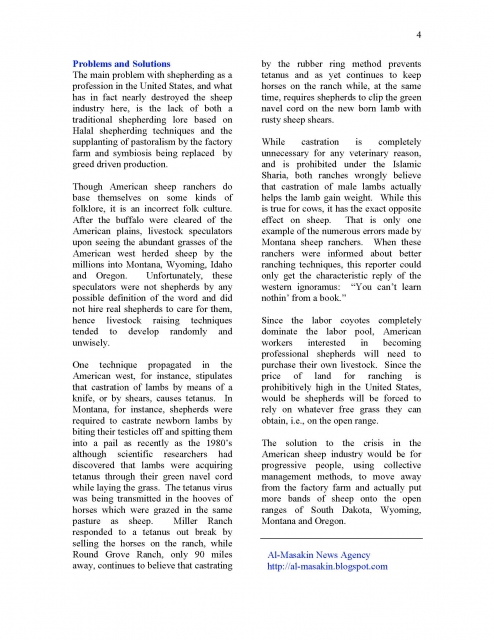 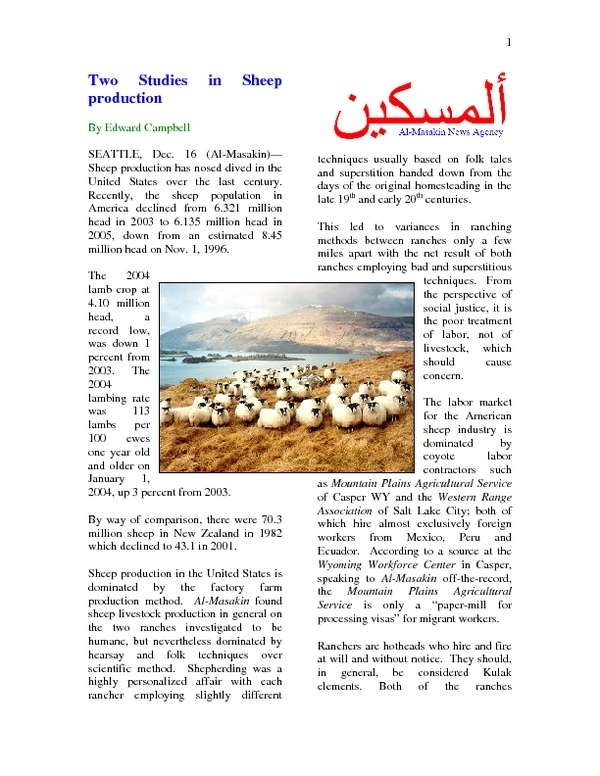 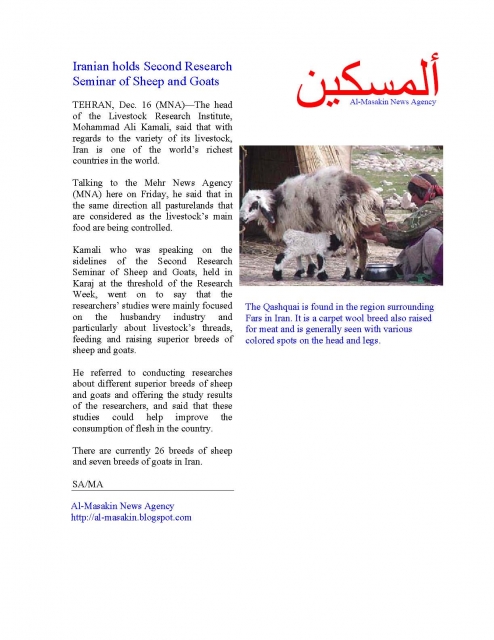 TEHRAN, Dec. 16 (MNA)—The head of the Livestock Research Institute, Mohammad Ali Kamali, said that with regards to the variety of its livestock, Iran is one of the world’s richest countries in the world.

Talking to the Mehr News Agency (MNA) here on Friday, he said that in the same direction all pasturelands that are considered as the livestock’s main food are being controlled.

Kamali who was speaking on the sidelines of the Second Research Seminar of Sheep and Goats, held in Karaj at the threshold of the Research Week, went on to say that the researchers’ studies were mainly focused on the husbandry industry and particularly about livestock’s threads, feeding and raising superior breeds of sheep and goats.

He referred to conducting researches about different superior breeds of sheep and goats and offering the study results of the researchers, and said that these studies could help improve the consumption of flesh in the country.

There are currently 26 breeds of sheep and seven breeds of goats in Iran.