Add an Event
Newswire
Calendar
Features
Home
Donate
From the Open-Publishing Calendar
From the Open-Publishing Newswire
Indybay Feature
Publish to Newswire
Add an Event
Related Categories: International | Global Justice & Anti-Capitalism
More Photos from the WTO Protests in Hong Kong, Day 4
by Puck Lo
Friday Dec 16th, 2005 10:39 AM
December 16- Fifty Korean trade unionists and farmers had spent the afternoon storming the US and Korean consulates in the business district this afternoon. They spraypainted “Down down WTO” and “No Bush” in red and black on the US Consulate while tearing the letters of the sign and throwing eggs at the building. In addition, several demonstrators shaved their heads as a form of protest. 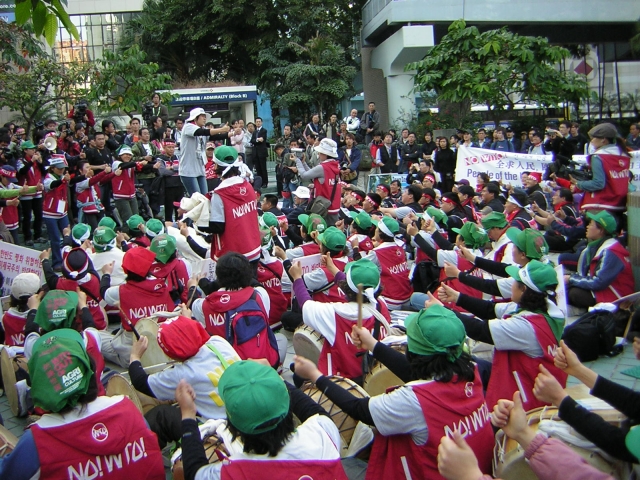 The activists explained that the US-machinated WTO free trade polices force South Korea to buy rice and other agricultural products from the US, destroying the livelihoods of Korean farmers. After a scuffle with the police, the protesters marched to a park and dispersed.

Meanwhile, 100 others from the Korean anti-WTO delegation demanded entry into the South Korean consulate, brushing past security guards who would not let them through. A dozen of them sprinted through the lobby to the elevators and managed to reach the fifth floor—where the consulate office is—before security disabled the elevator. It is unclear if any of the protesters got inside the consular office.

Police who arrived at 5pm to negotiate with the Korean activists at large within the building were greeted by 25 other protesters who held an impromptu sit-in in support of the Korean farmers and unionists.

“We’re South Korean citizens. We have a right to talk to our consulate,” one activist explained, demanding an apology from the Hong Kong police.
http://www.targetwto.revolt.org
§Korean Confederation of Trade Unions (KCTU)
by Puck Lo Friday Dec 16th, 2005 10:39 AM 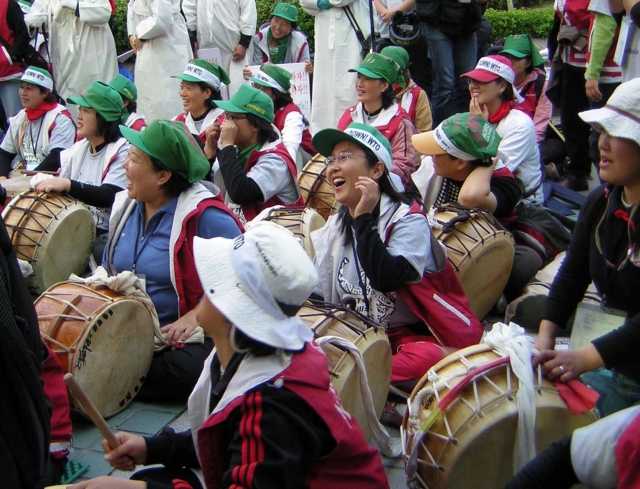 Earlier today, the Korean Confederation of Trade Unions (KCTU) held a lively rally at which they engaged in dances in front of a large audience of locals.

The KCTU is one group in the larger Korean anti-WTO delegation that has been protesting in Hong Kong all week.
http://www.targetwto.revolt.org
Add Your Comments
Support Independent Media
We are 100% volunteer and depend on your participation to sustain our efforts!