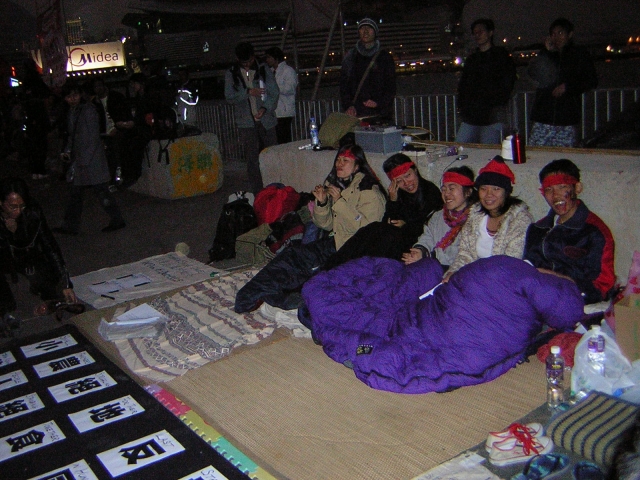 The strike was inspired by the Korean farmers’ procession on Thursday—when 1,000 Korean farmers and militant labor unionists performed a full-body bow every three steps.

In a press release the hunger strikers wrote: “In their steps and bows, we saw the strength in humility, the true power of a people. We thought of the rows upon rows of police barricades and the overwhelming power of the establishment that [the farmers] face just to get their voices heard. We sincerely hope that Hong Kong people will join us and support us. We hope that Hong Kong people will contribute to the life and dignity of our friends from overseas.”

Although the strikers note that their action is meant to be a show of solidarity with the farmers—not a platform on which to bargain with the WTO—they are nonetheless demanding that the restricted protest zone be opened and the police barricades removed; that the WTO opens its doors to the people outside the Convention Center and acts on their concerns; and that the WTO delegates remove the items of agriculture and fishery off the agenda.
http://link to Hunger Strikers' lette...
§Hunger Strike
by Puck Lo Friday Dec 16th, 2005 9:47 AM 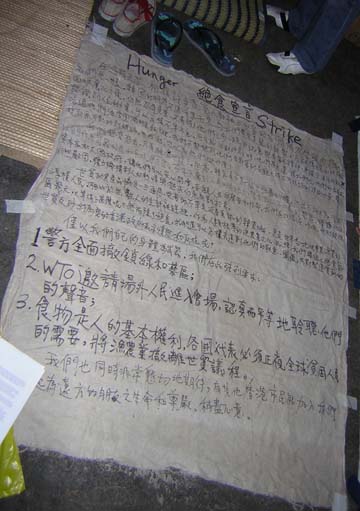 http://link to Hunger Strikers' lette...
Add Your Comments
Support Independent Media
We are 100% volunteer and depend on your participation to sustain our efforts!