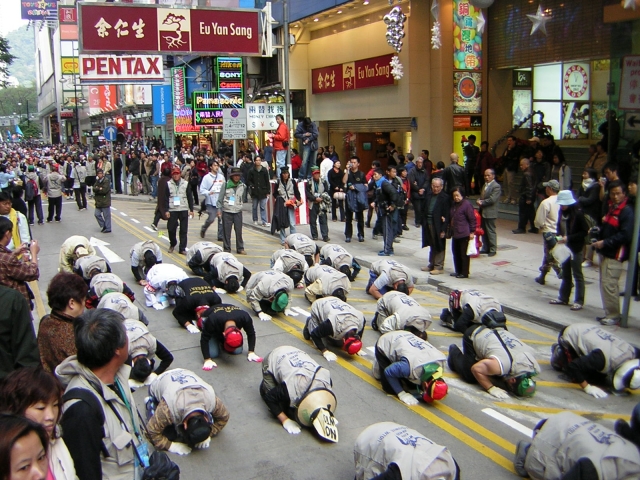 However, as the farmers lined up--wearing knee pads and gloves as well as their trademark beige vests and straw hats--the entire procession split into smaller groups of thirty. In synchronization, one group of farmers would drop to their knees, placing their hands and heads on the asphalt in a bow before standing up, taking one step forward and then bowing again. The next group behind would then follow suit, creating a ripple-like effect as farmers fell and rose in waves.

In this fashion, while chanting "Down, down, WTO!" as well as "Kong yee sai mau" (the Cantonese translation), the farmers traveled the entire way from Victoria Park to the designated protest zone near the convention center where the Sixth Ministerial WTO conference is being held until December 18. The two locations are a fourth of a mile apart from each other. It took the procession three hours to traverse the distance.

Many local and international activists, as well as Hong Kong residents, expressed that they saw the bowing as an act of humility and were touched by it. One observer commented that this public show of humility might finally humanize the Korean anti-WTO delegates to the Hong Kong public, who for months have been fed stories by much of the mainstream press depicting the Korean demonstrators as violent, and even as drunkards.

Several Hong Kong activists were so moved by the procession that they joined in. "I wanted to show that I, as a Hong Kong person, will act in solidarity with the Korean farmers. Not all Hong Kong people oppose the Koreans and the other protesters," one student activist declared in between bows.

After the procession reached the designated protest area, the Korean farmers, Via Campesina, and other farmer's groups who participated in the procession sat down, exhausted but high spirited. Many of the farmers dispersed shortly afterward.

Those remaining sat on the ground in rows, holding candles while several women from the Korean Women Peasants Association delivered speeches that moved many in the audience to tears.

"Many children have to leave their home villages. Their mothers do not want to pass on their poverty, so they send them to get educated in the cities. Children grow up only knowing their grandparents' voices from telephone calls. Then, when they return they find their mothers cold and dead. The WTO is killing us. We must stop them. That is why we will lay our bodies down on the cold street," one woman told the assembly, her voice cracking with emotion.

The rally closed with the singing of the anthem from the Kwangju uprsing during 1980 in Seoul, Korea. The Kwangju uprising is considered a landmark event in the struggles for democracy in South Korea.

http://www.targetwto.revolt.org
Add Your Comments
Support Independent Media
We are 100% volunteer and depend on your participation to sustain our efforts!