Newswire
Calendar
Features
Home
Donate
From the Open-Publishing Calendar
From the Open-Publishing Newswire
Indybay Feature
Publish to Newswire
Add an Event
Related Categories: Haiti | International
Haiti's Elections: Seeing the Forest and the Trees
by Brian Concannon, Haiti Action (reposted)
Wednesday Dec 7th, 2005 6:32 AM
Haiti's election dates have now been reset for the fourth time in the last five months. The Interim Government of Haiti (IGH) will now miss the February 7, 2005 deadline for transferring power that it had promised to meet for 21 months. These delays, and the logistical problems underlying them, are a cause for concern. But the logistical defects should not obscure the more fundamental problems that will prevent the elections, whenever held, from helping Haiti to break from its brutal history of political instability. 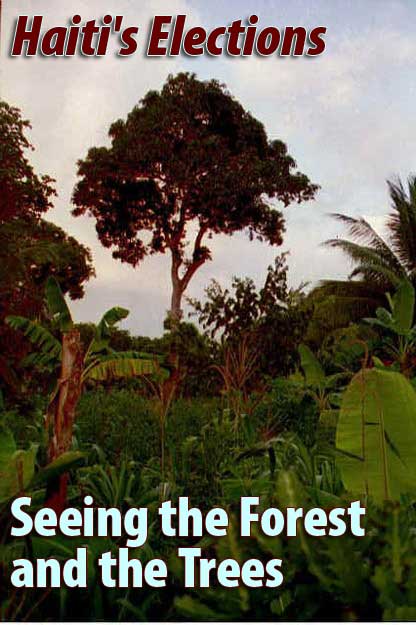 The delays show a disturbing lack of organizational competence on behalf of both the IGH and the Provisional Electoral Commission (CEP), which has the responsibility to run the voting. Every step of the process has been completed late, because of a failure to prepare for obvious obstacles. Voting registration stretched past the August deadline into October, because registration facilities were not installed in poor urban and rural areas. An international outcry pushed the CEP to expand the opportunities to register, and eventually about 3.5 million people reportedly registered, out of an estimated pool of 4.2 million eligible citizens.

The latest schedule calls for a first round of Presidential and legislative elections on January 8, a runoff election on February 15, and local elections on March 5. Several remaining hurdles make reaching this goal unlikely, including distributing electoral cards, printing the ballots, recruiting and training electoral officials and establishing enough voting centers. The electoral cards pose a particular challenge. Although the CEP held a ceremony to introduce a "pilot" distribution in September, the Counsel announced on November 30 that voters should listen carefully to announcements on how they should pick their cards up.

The distribution of the electoral cards is complicated, involving alphabetical order and date of registration, and the urban and rural poor who had so much difficulty registering often lack access to radio, television or other means of hearing the announcements. The schedule leaves five weeks before the first round to distribute the cards (and hire and train officials and find facilities for voting centers, which the CEP announced it was starting to do on November 30), when registration alone took over five months. Those particular five weeks may be the hardest of the year to get things done. They include Christmas, Haiti's Independence Day on January 1 and the beginning of Carnaval season on January 8, and much of that is school vacation.

The Interim government may eventually overcome these hurdles and hold technically acceptable elections. But logistical smoothness does not in itself ensure that the elections will make a sustainable improvement in Haiti's political stability.

Stability in Haiti requires a respect for the basic rules of democracy, as written in the Constitution and international human rights instruments. Voters must know that when they vote they have the right to elect the candidates of their choosing for a specified period of time. They must know they will have the opportunity to renew officials' mandates if they keep their promises, and vote them out of office if they do not. Those who seek political power must know that their only path to power is through the ballot box; those who attain power must know that they can stay as long as their term allows, and no longer.

The IGH's current course is establishing (or reviving) several dangerous precedents that undermine the basic democratic rules. First, it is demonstrating that a mandate can be extended by simply not holding elections for a replacement. The current best-case scenario has the country missing the Constitution's February 7 deadline for handing over power by a couple of weeks. Missing this deadline is serious, and will be more so as the two weeks stretches into many more (imagine the uproar in the International Community if President Aristide were in the National Palace and failed to hand over the Presidential sash on February 7). But the IGH missed an equally important deadline eighteen months ago. Article 149 of the Constitution gives provisional governments 90 days to organize elections, and that period expired on June 1, 2004, without any attempt to hold elections.

The IGH will claim that it is trying to hand over power as soon as it can, and that a lack of resources combined with logistical and security problems kept generating delays. But in October 1994, when Haiti's elected government was restored after a three-year dictatorship, it had less financial support but managed to organize full legislative and local elections in eight months, and the regularly scheduled Presidential elections six months after that. The IGH's claim of trying its best would have been more convincing had it not diverted so much time and money to projects that were unnecessary for an interim government: granting generous concessions for foreign companies to exploit shipwrecks that had sat off Haiti's coast for 300 years already, backpay for soldiers for not doing work after the army was disbanded in 1994, and most recently pursuing lawsuits against the elected governments in U.S. (and not Haitian) courts.

A second dangerous precedent is the government deciding who the people can vote for, and who can organize electoral activities. One of the most popular potential Presidential candidates, and the IGH's most prominent critic, Fr. Gerard Jean-Juste, is four months into his second stay in prison, despite no evidence of criminal wrongdoing. Haiti's last Constitutional Prime Minister, Yvon Neptune, has spent seventeen months in prison. Even the U.S. Ambassador called his detention a "violation of human rights, injustice and abuse of power." Dozens of grassroots activists, including well-known people like "So An," but also many more known only to friends and family in Haiti, are held illegally. On November 27, Louis Joinet, the UN Human Rights Commission's Independent Expert on Haiti, called a press conference to denounce the IGH's illegal jailing of political opponents.

A third dangerous precedent is the use of political terror as a campaign strategy. Over and over again over the last six months, Haitian police, and even troops from MINUSTAH, the UN mission in Haiti, have gone into neighborhoods known as strongholds of government opponents, killing, maiming and arresting people and destroying houses. In October, MINUSTAH's top human rights official called the human rights situation in Haiti "catastrophic," citing summary executions, torture and illegal arrests. Keeping the poor neighborhoods under siege and imprisoning activists keeps government opponents from organizing and campaigning. It also keeps voters indoors, now and on election day.

On August 20, police accompanied by civilians called the "Little Machete Army" attacked a crowd at a soccer game in the neighborhood of Grande Ravine, killing at least ten people. The police initially denied involvement, but after an outcry the force conducted a partial investigation. Police leadership made the report public, and disciplined eighteen officers, both positive signs. But no members of the Little Machete Army have been arrested, even though victims of the massacre report that they continue to operate openly. One MINUSTAH patrol did arrest a member of the victims' association, illegally (without a warrant), while he was working with another MINUSTAH unit to bring victims to the hospital. After another outcry the police released the leader.

The IGH cannot claim logistical or financial obstacles to stopping the political repression. Releasing political prisoners will actually save the money spent to incarcerate them; not shooting political opponents saves money spent on bullets. Many political prisoners have never seen a judge, and can be released by an order of the police or prosecutor. Most of the rest are held by judges hand-picked by the government, who would dismiss the case or at least let the person out on bail if prosecutors asked.

The "official" watchdogs for this election are maintaining their focus, and will not let the organizational chaos or widespread persecution dim their enthusiasm.. Last July, Organization of American States (OAS) Secretary-General José Miguel Insulza provided a glowing report, claiming the elections were "moving ahead," and predicted that a one-month extension of registration would solve the problems. Registration was eventually extended over two months, during which time the police arrested Fr. Jean-Juste and the death squads massacred the Grande Ravine soccer fans. When the latest dates were announced, Mr. Insulza conceded in retrospect that "the electoral process was slow to get off the ground," but trumpeted that now "considerable progress has been made, which allows us to be cautiously optimistic about having organized, orderly and credible elections early in the new year."

MINUSTAH reacted to the fourth postponement of the elections with an equally glowing report- it even predicted the new President would be inaugurated a week earlier than the electoral decree did. MINUSTAH's press release did not even mention the "catastrophic" human rights situation that its own human rights department denounced in October, or the political prisoners that Mr. Joinet discussed just three days before. MINUSTAH Chief Juan Gabriel Valdes did warn of "dark interests in Haitian society" that could disrupt the elections, but could find no fault with the IGH's lack of preparation or persecution of opponents.

Haitian voters may decide that the best thing they can do in the face of a deeply flawed process rubber-stamped by the International Community is to participate anyway. They may find a candidate they can support enthusiastically, and be happy with the end result. But this will not mean Haiti is any closer to escaping its centuries'-old cycles of violence. The shortcomings of the process will inevitable detract from the victor's legitimacy, making a tough job even harder. The precedents of extending a Presidential mandate, keeping opponents off the ballot and deploying electoral terror will soon enough return back to once again deprive the Haitian people of the stability and democracy the deserve.