Add an Event
Newswire
Calendar
Features
Home
Donate
From the Open-Publishing Calendar
From the Open-Publishing Newswire
Indybay Feature
Publish to Newswire
Add an Event
Related Categories: U.S. | Anti-War
Cindy Sheehan joins Thanksgiving Camp Casey anti-war protest in Crawford, Texas
by Jeff Paterson, Not in Our Name (jeff [at] paterson.net)
Thursday Nov 24th, 2005 8:25 PM
Crawford, Texas (November 24, 2005) - Returning from his China getaway, Bush has again been met outside his ranch near Crawford, Texas by people from across the state and country, demanding an immediate end the US occupation of Iraq. 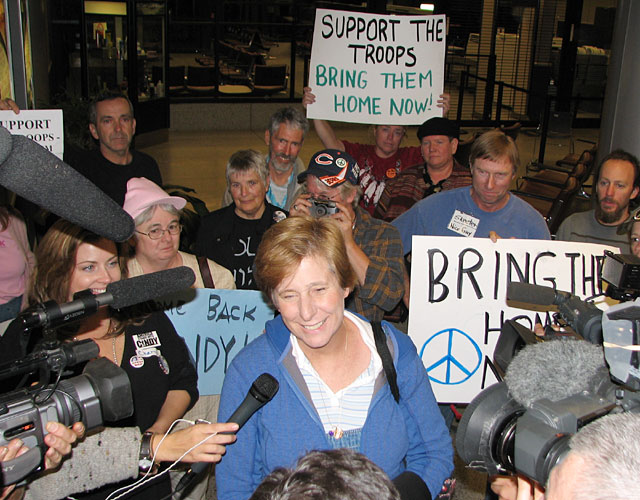 Crawford, Texas (November 24, 2005) - Returning from his China getaway, Bush has again been met outside his ranch near Crawford, Texas by people from across the state and country, demanding an immediate end the US occupation of Iraq.

Renewing the Camp Casey protest vigil in central Texas yesterday, a dozen anti-war activists challenged the county’s recent laws against camping or parking on the side of any public road. Those arrested included Daniel Ellsberg, former diplomat Ann Wright, and DeDe Miller, Cindy Sheehan’s sister. They are charged with trespassing and obstructing the road. They were sitting in the ditch along a county road, and no obstruction occurred. Each of these Orwellian criminal misdemeanors carries a possible 180 in jail, and a $2,000 fine.

The “legal” Camp Casey II has again been erected on donated land at the foot of one of the access roads to the Bush ranch. Like many folks around the country, Camp Casey gathered for a Thanksgiving meal today – but ours was traditional Middle Eastern fare.

Under a large white tent, Bill Mitchell described how he first joined a local anti-war protest in his hometown of San Luis Obispo in Southern California when the war first started. He carried a sign that read, “Bring my son home now.” He noted that he soon got what he asked for, but that his sign should have read, “Bring my son home now, alive.” He later helped found Gold Star Families for Peace with Cindy Sheehan.

Daniel Ellsberg, the Pentagon Papers whistleblower, held the tent’s undivided attention with endless tales of civil disobedience against unjust laws and policy. He turned serious when he expressed his doubts that “American justice” and civil rights as we know them would not survive the next 9/11. To Daniel Ellsberg, one important question is how many of us will speak out when the government targets immigrant communities and political opponents are rounded up and placed in detention camps. We should not wait until then, now is the time to resist, he concluded.

Wrapping up Thanksgiving in Crawford, dozens of supporters and media welcomed Cindy Sheehan upon her return to Camp Casey. In a brief statement at the small airport terminal, Cindy expressed confidence that the August vigil outside of the Bush ranch played a key part in starting a new national dialog on the Iraq War. Many people feel that history may record Camp Casey as a turning point in the war without end.
http://www.notinourname.net/war/sheehan.htm
§Camp Casey II resurrected near Bush ranch
by Jeff Paterson, Not in Our Name (jeff [at] paterson.net) Thursday Nov 24th, 2005 8:25 PM 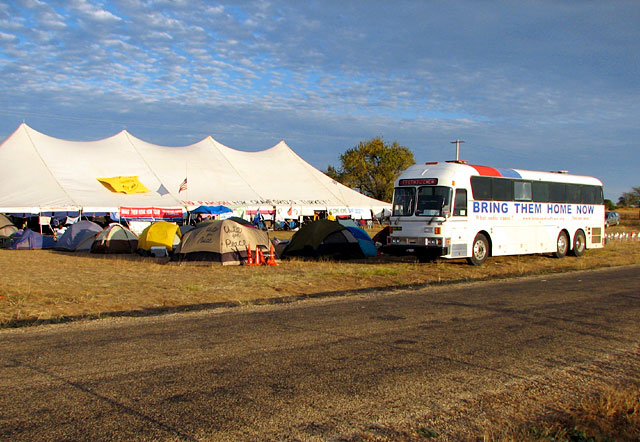 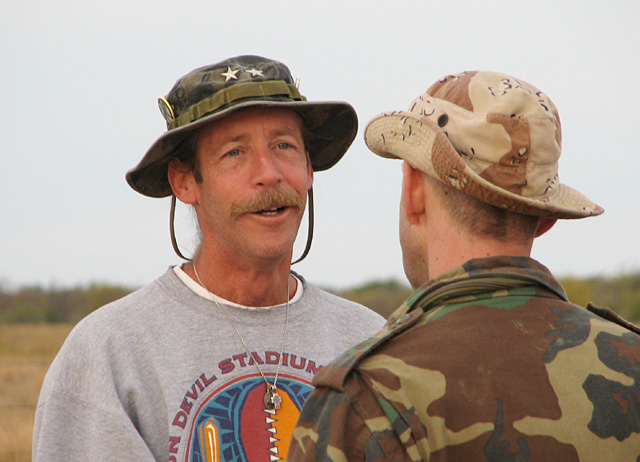 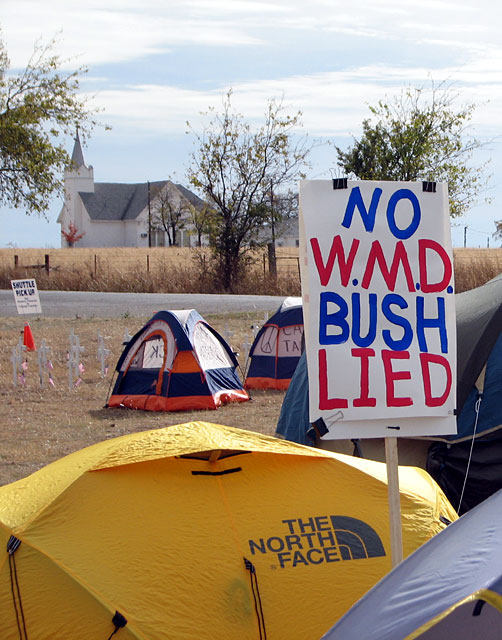 http://www.notinourname.net/war/sheehan.htm
§Reading the names of US troops killed in Iraq
by Jeff Paterson, Not in Our Name (jeff [at] paterson.net) Thursday Nov 24th, 2005 8:25 PM 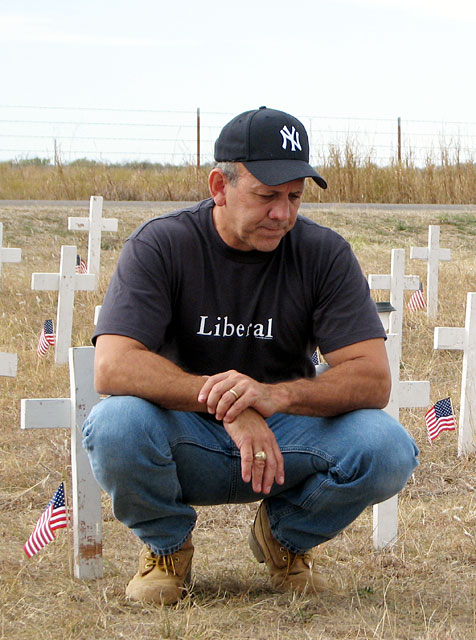 http://www.notinourname.net/war/sheehan.htm
§Cooking the Thanksgiving meal
by Jeff Paterson, Not in Our Name (jeff [at] paterson.net) Thursday Nov 24th, 2005 8:25 PM 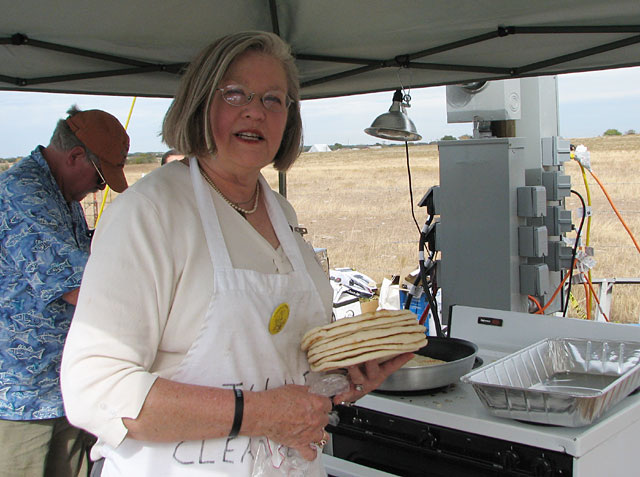 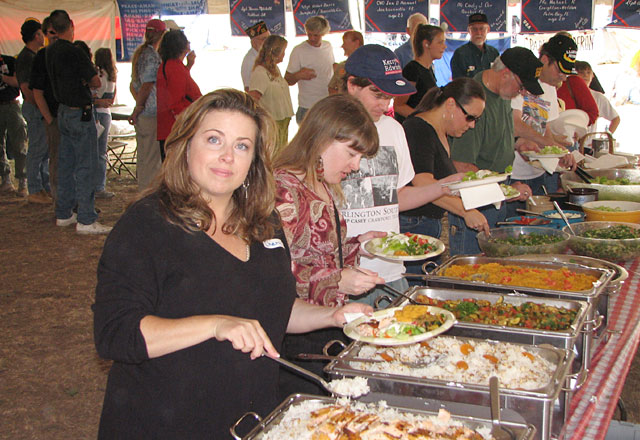 http://www.notinourname.net/war/sheehan.htm
§Daniel Ellsberg during an interview
by Jeff Paterson, Not in Our Name (jeff [at] paterson.net) Thursday Nov 24th, 2005 8:25 PM 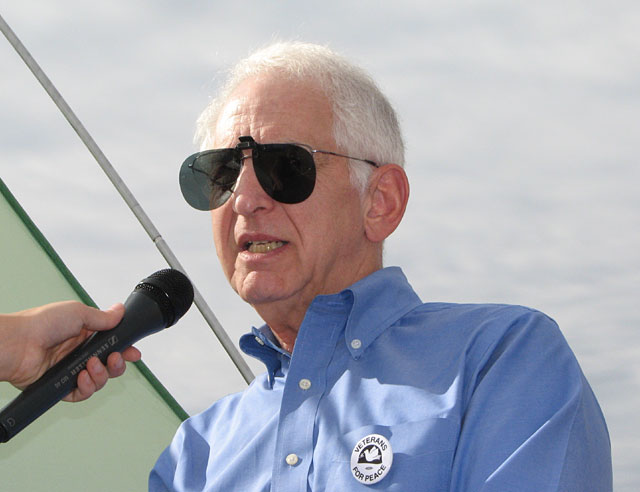 http://www.notinourname.net/war/sheehan.htm
§Cross representing a few of the US troops killed in Iraq
by Jeff Paterson, Not in Our Name (jeff [at] paterson.net) Thursday Nov 24th, 2005 8:25 PM 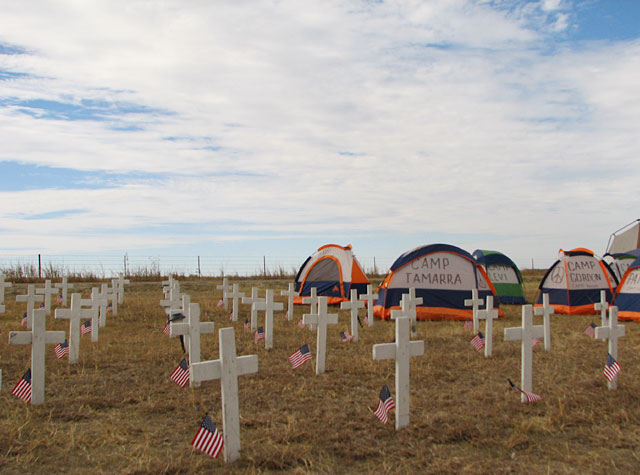 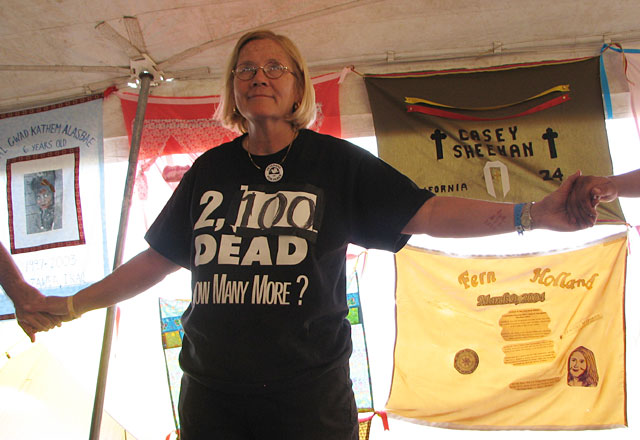 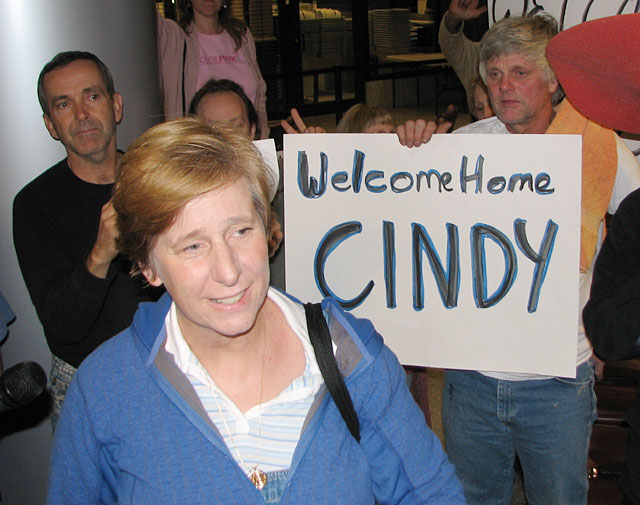 http://www.notinourname.net/war/sheehan.htm
§Cindy Sheehan greeted at Waco airport by supporters and media
by Jeff Paterson, Not in Our Name (jeff [at] paterson.net) Thursday Nov 24th, 2005 8:25 PM 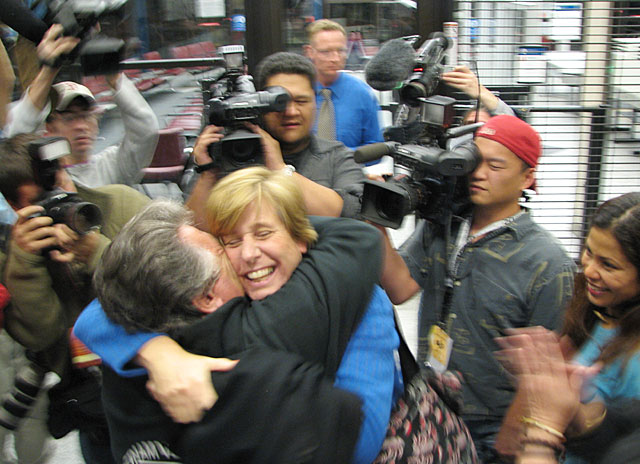 §inspiring
by MJ
(mjm [at] notinourname.net) Friday Nov 25th, 2005 10:45 AM
These pictures show the true meaning of dedication to stoping this madness called war, thanks to all of you for being there and speaking for all of us who can't get there,peace,MJ
Add a Comment
§Real Vets Prefer Singing from Electric Chair
by Kurt Brown--Saint Ram Bone
Friday Nov 25th, 2005 4:42 PM 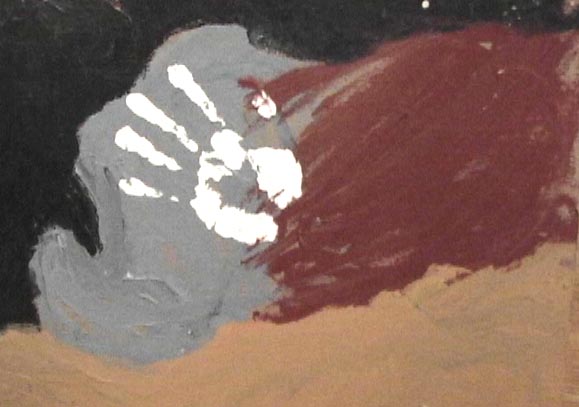 After being forcibly injected and forced silent by the federal government, and as a veteran who was betrayed by those who he trusted when I felt my life was in danger after an attempt upon it for alerting the public to criminal infestation at my past employer, the Federal Deposit Insurance Corporation, a federal agency in San Francisco whose prior Regional Director was killed at his desk, with no guilty party found.

Chinese checkers, a Russian soire, a Mexican mambo, or you name it, it all comes out the same, a sick bunch of murderers are running our government in some sectors.

Enjoy my latest song, Stone Cold in My Electric Chair....Wood is already free, a 30 second prelude to the music to free the Wood.

The best we can do I think is pretend we have a garden. Are they all in one pod or are there many? Is there a choice when a stink weed has invaded from the neighbors devious pea patch?

MOBILE AUDIT CLUB
http://www.angelfire.com/zine2/democracyor...
Add a Comment
§Camp Casey Thanksgiving
by Prissy Patriot
Saturday Nov 26th, 2005 9:14 AM
Wish I was there! Camp Casey in August was the most inspiring place I have ever been-military people and families of vets who all knew this war was wrong.
Thank you a thousand times to the Gold Star Families for Peace and especially Cindy. By forcing the public and the media to pay attention, the war is on the front page where it belongs until this atrocity is over. Your actions will save countless lives and as a military family, we are forever grateful to you all for your efforts. May God bless you and bring you the peace you so richly deserve.
http://prissypatriot.blogspot.com
Add a Comment
§Another 911
by David McFatridge
(Quietdave [at] alltel.net) Saturday Nov 26th, 2005 8:03 PM
Daniel Ellsberg stated in his talk to the war protesters that he expects there will be another 911, at which time President Bush will ask for and recieve more "War Powers". Now is the time to stand up for our rights (free speach) or loose them forever.
Add a Comment
§Correction
by Mike McNiel
Tuesday May 29th, 2007 3:28 PM
The guy talking to Bill Mitchell in the third picture... his name is not "Gu." He is a former United States Marine Corps Gulf War Veteran and his name is Mike McNiel. Ask Bill Mitchell. He sent me the picture.
Add a Comment
Support Independent Media
We are 100% volunteer and depend on your participation to sustain our efforts!