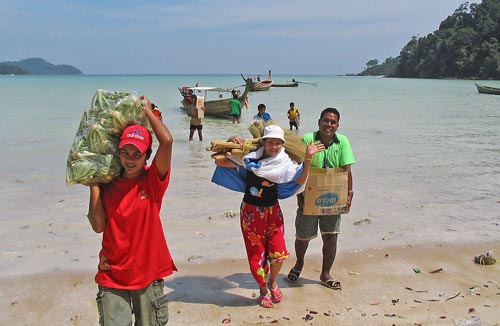 At 6:30 AM, the day after Christmas, Bodhi Garrett received a phone call. A tsunami had hit Thailand, and the island eco-resort that employed him had been destroyed. Almost immediately, Garrett was put to task, contacting families of the deceased, organizing search parties and preparing for the relief effort from his parent’s home in Carmel Valley, CA. With no prior tsunami warning, it was pure luck that he had left Thailand two days before the tsunami hit, visiting his family after a year and a half absence.

Upon his return to Thailand, Garrett and a group of dedicated volunteers noticed the deficiencies in the local relief efforts.
“The first thing that I saw that there was more instant noodles and rice than you could swim in, and there were no fresh vegetables and no cash to buy them. So we gave cash to the poor families and started to deliver fresh vegetables,” he recalled.

This was the first project of what grew into North Andaman Tsunami Relief (NATR), an NGO with over 60 active or completed projects in 12 villages. With their knowledge of the communities before the tsunami hit, NATR is able to see what needs are and aren’t being filled and use small amounts of resources to leverage change.

In managing this new organization, Garrett was struck by the misuse of resources dedicated to tsunami relief.
“If you don’t understand the culture, you can’t devise appropriate use,” he explained as he pointed to the four offers, each totaling over $100,000, which he had received for building orphanages in Thailand. “Families in Thailand are extended and have strong kinship networks, so people are taken in by their larger families… there is no need for an orphanage in Thailand. But, so much money is locked up for useless projects , that there is no money for needy projects, such as long-term scholarships.”

Garrett also pointed to more severe mismanagement issues, such as a lack of coordination amongst reconstruction efforts. An example he used was the village of Bak Jok, one of the three well-established villages on his island, where the Lyons Club International, French Popular Rescue, the French Red Cross, and the Swiss government are each rebuilding houses is separate areas. “It’s a tragedy - it is going to split these communities up and it is a waste of resources, when you could just build be one sufficient village,” he explained.

The misuse of resources is but one of the criticisms levied against the flood of outside relief dollars. Garrett also feels that the outside management accompanying this aid has its consequences. “There is no devolution of authority to the community level, that’s why all hell breaks lose, because nobody feels responsible in the community; the people that do are too busy protecting themselves and those that feel disenfranchised run rampant.” There is also an inequity with which the resources are being distributed. Garrett witnessed funds going to Buddhists much faster than the Muslim Thai. And the Sea Gypsies, impoverished people regarded as the indigenous guardians of the Andaman Sea, received almost no aid and were forced to beg for rice.

But as time rolled forward, the community came together.

“What I saw was initially there was some looting, but then people came through for each other because there was this feeling of local identity,” Garrett recollected.

On Koh Phratong Island, where Garrett’s Eco-resort once stood, a native Sea Gypsy, Arun Khlatalay, even ran for and got elected to the village council. Encouraged by the Buddhist monks who had taken him in after the tsunami hit, Arun ran for office after he had learned that the village leaders were skimming government funds intended to compensate the Sea Gypsies for their damaged and destroyed boats.

The Sea Gypsies had already suffered years of exploitation by the Naihua, or property lenders, who would pay the gypsies a pittance for their fish, while subjecting them to exorbitant loans for their boats.

“It made me realize that we had to change,” said Arun, in an interview with the Washington Post. “We cannot be enslaved anymore.” 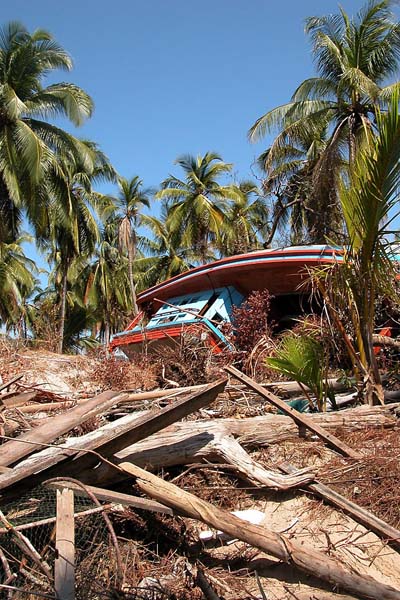 above photo: Sharron Binns
Add Your Comments
Support Independent Media
We are 100% volunteer and depend on your participation to sustain our efforts!