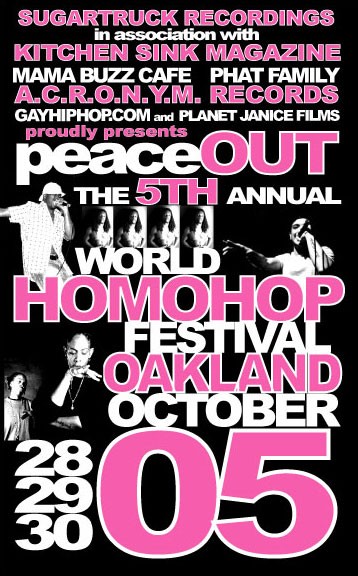 PeaceOUT is an international gathering of lesbian, gay,bisexual and transgender hip-hop artists, activists, fans and supporters to celebrate the LGBT presence in hip-hop music and culture, hosted and produced by Sugartruck Recordings in conjunction with A.C.R.O.N.Y.M.Records. The festival will take place over the weekend of October 28-30 in Oakland, California and will feature live music,DJs,spoken word, dance/performance
events.
The first PeaceOUT World Homo Hop Festival (Then known as Cypher) was held in August 2001 at Oakland's East Bay Pride and has become an annual tradition.Its popularity enabled the creation of the recent 2nd Annual PeaceOutEast (NYC-July 14-17,2005) PeaceOUT UK (London,August 5-6,2005), last year's PeaceOutSouth (Atlanta,Sept.5)and the upcoming PeaceOutNorthwest,(Portland Oregon, Spring 2006).

The evolution of PeaceOUT and the lives of performers in the scene are chronicled in the feature documentary PICK UP THE MIC (Planet Janice Films) which recently premiered to rave reviews at the 30th Annual Toronto International Film Festival. For more info on the film,reviews,and details on its upcoming release, visit
http://www.pickupthemic.com

A number of LGBT hip-hop performers are listed on the Phat Family Records and Sugartruck Recordings homepages. Most of them have their own websites with photos, MP3s and CDs available for sale.Many any of them have appeared on one or more Phat Family Records CD compilayions.Please visit http://www.phatfamily.org and http://www.sugartruckrecordings.com for more info.
All news and updates will be announced on the Phat Family Announcements
mailing list and Kitchen Sink’s monthly e-newsletter. Updates and show information will also be available at Mama Buzz Cafe
(2318 Telegraph Ave, Oakland.)

Artists and fans interested in the latest information on PeaceOUT and other Sugartruck and Phat Family Records events are encouraged to sign up by sending e-mail to phat-family-announce subscribe [at] yahoogroups.com.If you are in need of more specific info, email us at info [at] peaceoutfestival.com or events [at] kitchensinkmag.com.


Kitchen Sink, the magazine for people who think too much, is a non-profit, quarterly print magazine that explores thought, art, culture, identity and politics. It is the premiere program of the Neighbor Lady Community Arts Project, an Oakland-based arts organization, was recently named 2004 Best Cultural Happening by San Francisco Magazine, is the recipient of the 2003 Utne Independent Press Award for Best New Title, and the Best of the Bay 2003 awards from the SF Weekly, SF Bay Guardian, and East Bay Express.

Mama Buzz is a cafe, gallery and gathering place for artists, creators and their communities. Mama Buzz was also named Best Hipster Hangout by The
East Bay Express, Best Coffee with the Kitchen Sink by the SF Bay Guardian, and Best Indoor/Outdoor Cafe by San Francisco Magazine. 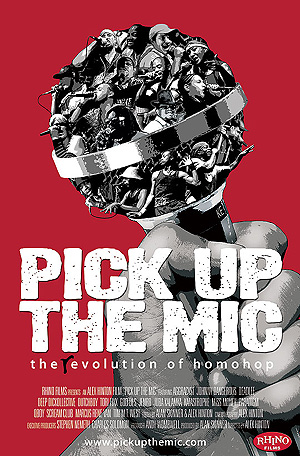 The PeaceOUT World Homohop Festival and its performers are featured in the Planet Janice Films documentary PICK UP THE MIC, which premiered at the 30th Annual Toronto International Film Festival (Sept. 8-17 2005).
http://www.peaceoutfestival.com
Add Your Comments
Support Independent Media
We are 100% volunteer and depend on your participation to sustain our efforts!