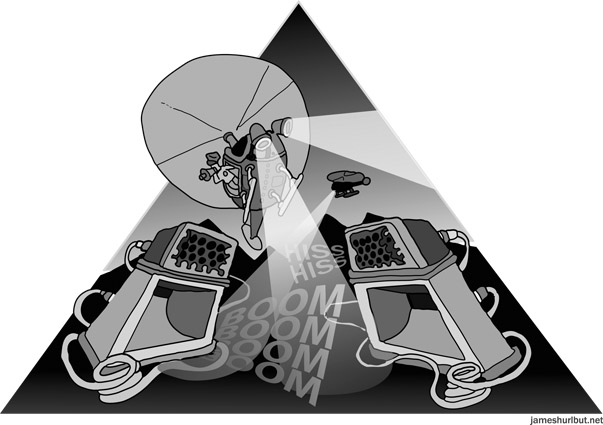 Last night, I was booked to play an event near Salt Lake City, Utah. The hype was huge, they presold 700 tickets and they expected up to 3,000 people. The show was all outdoors, in a valley surrounded by huge mountains. They had an amazing light show flashing onto a mountain behind the site, the sound was booming and everything just seemed too good to be true...

At about 11:30, I was standing behind the stage when I noticed a helicopter pulling over one of the mountain tops. I jokingly said, “Oh look, here comes Big Brother” to the person I was with—I wasn't far off. The helicopter dipped lower and lower and shined its lights on the crowd. I was kind of in awe as this thing circling us, but then I looked towards the crowd and saw a guy dressed in camouflage walking by, toting an assault rifle. At this point, a few “troops” rushed the stage and cut the sound off and started yelling that everyone “get the fuck out of here or go to jail.” This is where it got really sticky.

No one resisted. That's for sure. I saw one of the police dogs signal out a guy who obviously had some drugs on him. The soldiers attacked the guy (four of them on one), and kicked him in the ribs and had their knees in his back and sides. As they were cuffing him, there were about 1,000 kids trying to leave in the backdrop, peacefully. Right then, a can of fucking TEAR GAS is launched into the crowd. People are running and screaming at this point. Girls are crying, guys are cussing. . . bad scene.

Now, this is all I saw with my own eyes, but I heard plenty of other accounts of the night. This isn’t gossip I heard from some candy raver, these are instances cited straight out of the promoter’s mouth:

-One of the promoter’s friends (a very small female) was attacked by one of the police dogs. As she struggled to get away from it, the police tackled her. Three grown men proceeded to KICK HER IN THE STOMACH.

-When the main promoter tried to show the police that he had a permit, they said, “No, you don't,” ripped the permit from his hand, put an assault rifle to his forehead
and said, “Get the fuck out of here right now.”

Now, let's get the facts straight here—this event was 100% legal. They had every permit the city told them they needed. They had a 2 MILLION DOLLAR insurance policy for the event. They had licensed security guards at the gates confiscating any alcohol or drugs found upon entry ( the security guards were all arrested for possession).

Oh, another interesting fact: The police did not have a warrant. The owner of the land already has a lawsuit against the city for a party they busted on her land a few months ago (at which they didn’t arrest her, but they FORCED HER TOLEAVE HER OWN PERSONAL PROPERTY!).

Don't get it twisted, this is all going down in probably THE most conservative state in the USA. Even though everything about this event was legal, the police wanted this party shut down, so they made it happen. The promoters spent over $20,000 on this show and did everything they had to make it legit, only to have it taken away from them by a group of radical neo-cons with an agenda.

This was one of the scariest things I have ever witnessed in person. I can't even begin to describe how surreal it was. Helicopters, assault rifles, tear gas, camoflauge-wearing soldiers.... why? Was that really necessary?

This needs to be big news across the USofA, especially in our music scene (electronic dance music, as a whole). This could happen to any of us at any time. When we're losing the right to gather peacefully, we're also letting the police set a standard of what we can get away with. And I think that's BULLSHIT!