Add an Event
Newswire
Calendar
Features
Home
Donate
From the Open-Publishing Calendar
From the Open-Publishing Newswire
Indybay Feature
Publish to Newswire
Add an Event
Related Categories: San Francisco | Arts + Action | Environment & Forest Defense | Fault Lines
Critical Mass is Thirteen: The Culture War is Older (and far from over)
by By Chris Carlsson (sfbay-print [at] indymedia.org)
Tuesday Oct 4th, 2005 8:14 PM
Amazing to think it's been 13 years since the first “Commute Clot” brought together about 50 bicyclists at “PeeWee” Herman Plaza at the foot of Market Street in San Francisco. Within a few short months it had gained the moniker “Critical Mass” and the excitement and euphoria and sheer novelty of an “organized coincidence” that fills the streets with bicycles instead of cars was rapidly reproducing itself across the planet. 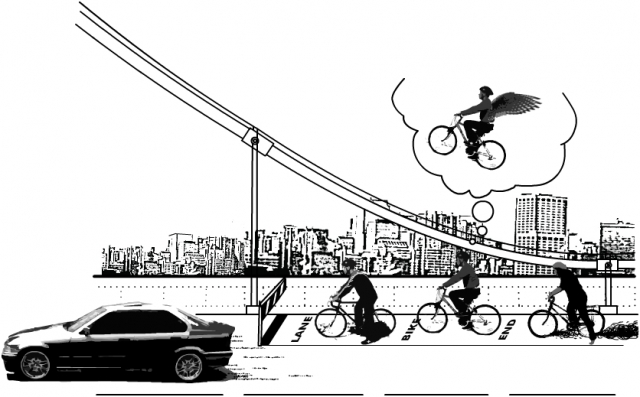 Now there are websites galore documenting Critical Masses in towns everywhere, from Australia to Italy, Chile to Canada. Of the more than 400 places where Critical Mass rides have taken place, hundreds continue to ride every month. In May 2005 an “Interplanetary Critical Mass” was held in Rome, Italy, drawing several thousand riders from around Italy and the world. On Earth Day this past April, 10,000 riders staged a “Critical Mass” in Budapest, Hungary. Hundreds of rides occupy the streets of US cities on the last Friday of each month, from big cities like Chicago and Los Angeles, to the smaller burgs in the hinterlands like Cincinnati, Ohio, Grand Rapids, Michigan, and Portland, Oregon. And of course thousands of us are still riding after all these years at the birthplace here in San Francisco.

New York had seen Critical Mass grow from the mid-1990s until (during their 2003 Bikesummer) it finally topped 1000 riders on a gloriously balmy July evening. I was there that night, enjoying the thrill of crossing the Queensborough Bridge and looking south towards twinkling Manhattan and Brooklyn. The galvanizing impact of Critical Mass on bike commuting, bike communities, and pushing the boundaries of political imagination and tactics led more or less directly to the now infamous confrontation with the NY Police Department during the Aug. '04 Republican National Convention (RNC). After an entire year of illegal and barbaric treatment by the NYPD, cyclists in New York have perservered, as documented in the new documentary “Still We Ride.” Civil libertarians and anyone concerned about basic rights to assemble, protest, celebrate, and speak have flocked to defend the New York Critical Mass. Several lawsuits and criminal cases are still pending, as the local authorities have suspended normal legalities to carry out a witchhunt against Critical Mass in New York, which has included the blatant theft of dozens of bicycles by none other than the police department itself!

A lot of cyclists, when confronted by the curiously vitriolic anger and belligerence of the police (not just in New York, either, but in SF, LA, Portland, Minneapolis, Austin, and more), are puzzled. Why do the police react so strongly to CM? Why does a simple crowd of bicyclists seem to inspire such fear and loathing on the part of the authorities? We have to take a deeper look to understand it.

There are two basic factors that explain what's going on: “Culture War” and a conflict between old-style hierarchy and the emergence of flexible network-based social movements.

Individual police are usually people who more or less blindly believe in the “American Way” of life. That means they've literally “bought in” to the automobile/oil debt cycle for themselves and think that embracing the bicycle as alternative transportation is childish and immature. They believe that the way things are in the US is truly the “best of all possible worlds.” They find it deeply disturbing (as do some motorized citizens) to encounter an amorphous crowd of people on bicycles rolling through town (and stoplights), talking and laughing, tinkling bells and generally having fun while suspending the “normal” (anti-)life that predominates on the streets.

Police officers, who are not instructed otherwise, feel it's their duty to punish these scofflaw cyclists and to impose a price on them for their ostensible pleasure. When the basically innocent cyclists protest being ticketed, manhandled, and otherwise abused by the police, it only fuels the rage simmering inside the locked-down, uninspired, uncreative brains of the boys and girls in blue. In other words, these moments become a front-line confrontation in a vast, confusing and inchoate Culture War that is in some ways reproducing historic cleavages that divided Americans during the Vietnam era, and even longer ago during the Civil War era. Vicious racism and manifest destiny (white man's burden) imperialism are underlying forces driving the conflict between those who would “progress” to an era of cooperation, mutual aid, peace and tolerance against those who fear change and cling with violent intensity to a world palpably collapsing around them.

People who embrace cycling and come out to ride in Critical Mass come from all walks of life, widely varying incomes and housing situations, and cannot be characterized accurately as part of a “class” as it is commonly understood. Also, the folks stuck in traffic in cars or on busses are clearly more like than unlike the riders who are temporarily altering the rhythm of urban life by seizing the streets on bicycle. Nevertheless, Critical Mass cyclists are the most visible practitioners of a new kind of social conflict. The “assertive desertion” embodied in bicycling erodes the system of social exploitation organized through private car ownership and the oil industry. And by cycling in urban centers in the heart of the Empire, we join a growing movement around the world that is repudiating the social and economic models controlled by multinational capital and imposed on us without any form of democratic consent.

This mass seizure of the streets by a swarming mob of bicyclists without leaders is precisely the kind of self-directing, networking logic that is transforming our economic lives and threatening the structure of government, business, and (as more imaginative military strategists are coming to understand) policing and war-making too. So the local police and authorities often respond with great frustration and confusion to the eruption of a tactical flexibility for which they're simply unprepared. And in classic patriarchal fashion, they lash out with physical punishment as best they can, trying to repress what they cannot understand or control. But like the insurgency in Iraq, or any guerrilla war, when a blundering monster attacks in classic old-style ways, the new, mobile, decentralized networks just vanish, leaving the attackers swinging at air (perhaps they “catch” a few individuals now and then). The structure that is threatening them remains intact and often grows stronger—just like Critical Mass has in most places it has been attacked.

So on our bucolic 13th birthday ride in San Francisco we should take some time to reflect on the larger national and international dynamics of which we are a small part. We can be thankful that our local police have been taught to tolerate us, but that gift to us comes with an interesting obligation: to extend the logic of our resistance and innovation into new areas of contestation, to link up with people elsewhere who are not so lucky and provide material aid and strategic support whenever we can.