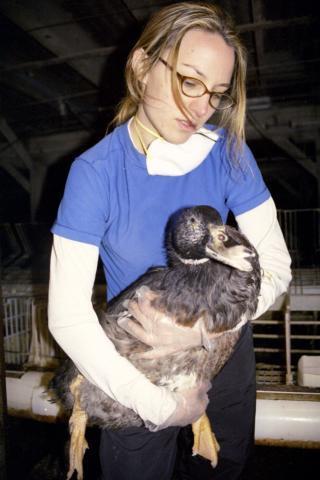 When the animal rights movement began widely focusing on farmed animals in the 1980s, it wisely chose the veal industry as a primary target. Images of baby cows locked in tiny crates spoke volumes, and most consumers were rightly appalled when they learned of the cruelties these male calves endured. As the public’s taste turned away from veal, countless restaurants dropped it from their menus, and, although the anti-veal campaign continues, their initial success buoyed animal protectionists to further action.

It is not a stretch to say that the culinary extravagance known as foie gras, the “fatty liver” of male ducks and geese, is this decade’s veal. As with veal, foie gras is created by grossly manipulating an animal’s body—in this case the Moulard duck—to provide a fleeting gustatory pleasure to the palate. And like their bovine counterparts, the birds being exploited for their livers have activists around the globe championing their cause. More than a dozen countries have outlawed foie gras production, and last year, animal advocates sponsored a California bill that will ban the production and sale of the delicacy in that state in 2012. Similar legislation is pending in New York, Massachusetts, Illinois, and Oregon.

“This move to ban foie gras and other animal cruelties dramatically illustrates that the real criminals are those torturing animals for profit,” says Sarahjane Blum, who started GourmetCruelty.com with fellow activist Ryan Shapiro in 2002. This Washington DC-based group uses a variety of methods to keep pressure on the two farms primarily responsible for foie gras produced in the U.S.: Sonoma Foie Gras in California and Hudson Valley Foie Gras in New York. Ducks on these farms are denied water to swim in, which is essential to waterfowl for their grooming and health, and those on the New York farm are restricted to small isolation cages. Ducks at both locations are fed three times a day using a metal tube and pneumatic pump that forces a pound of feed down a bird’s throat in seconds, a process that eventually enlarges the duck’s liver to ten times its normal size as it becomes 80 percent fat. The suffering these animals experience is certainly no less shocking than what a veal calf goes through, and while activists are no less dedicated to the fight against foie gras, two new, opposing avenues of ideology intersected shortly after September 11, 2001, making the landscape of activism a bit trickier to negotiate than it was 20 years ago.

One avenue was the introduction of open rescues to liberate animals from places of exploitation. Pioneered in the 1980s by Patty Mark, this model of activism is based on the desire to provide aid, veterinary care, and sanctuary to any neglected or abused animal in a confined condition. Activists engaged in open rescues not only save lives but also document the cruel conditions in which they find the animals, who are most often liberated from factory farms. Removing sick or injured animals and going public with their discoveries quickly put activists on animal agriculture’s “most wanted” list, but it wasn’t until the 9/11 tragedy that agribusiness did much about it. The horrific terrorist attacks of that day resulted in the second ideological avenue: the USA Patriot Act. This sweeping assault on civil liberties has given genuine teeth to factory farming’s battle with animal activists, lumping them (as well as peace and eco-activists) together with suicide bombers and right-wing militias. Amid our nascent climate of intolerance toward any civil disobedience, nearly all protest activity is being labeled “terrorism,” and animal activists are being called to appear before grand juries to testify about their actions. Agribusiness is thus armed with a bona fide weapon to use against anyone entering farms to rescue animals—like ducks exploited for foie gras.

“Following the example of Patty Mark in Australia, groups like COK [Compassion Over Killing] and MFA [Mercy for Animals] had done a terrific job exposing what goes on in battery cage facilities, but apart from an investigation PETA did in 1991, foie gras had pretty much escaped this exposure,” says Shapiro. Founding GourmetCruelty.com, he explains, was a way to educate the public about an industry’s little-known practices while promoting veganism and an end to factory farming in general. In addition to its rescue and legislative work, they have produced an undercover documentary, “Delicacy of Despair,” which takes viewers behind the doors of the foie gras industry. Blum adds, “The cruelty of foie gras is so obvious and unnecessary that it makes it a perfect issue to illustrate the inherent cruelty of modern intensive animal agriculture. As such, the fight against foie gras needs to be seen as a fight against factory farming more broadly.”

Blum and Shapiro made headlines last year when they were arrested and charged with felony burglary for rescuing ducks from Hudson Valley Foie Gras (HVFG). It was the first time in nearly 30 years that criminal charges had been filed against animal advocates in the U.S. for openly liberating animals. Shapiro says they’re seeing big changes in how activism is viewed. “It used to be that factory farmers were reluctant to bring charges against open rescuers because they were so mortified by the graphic cruelty exposed through investigations by groups like COK and MFA that not only did they not press charges, they denied that the groups had been on their farms or that the farms shown on video were even theirs,” he says. “That was not the case with us. HVFG said, ‘That is our farm; they took those ducks from us,’ and they pressed charges.” Yet, just when it seemed the government was going to make an example of them—the two longtime activists were facing up to seven years in prison—the charges were abruptly dropped.

“It was obvious that a trial would only have further proven that the real criminals are those who torture animals for profit, not individuals moved by compassion to attempt to stop animal cruelty,” says Blum. “The factory farmers have a real dilemma. They’ve clearly realized they can’t just ignore the continued exposure of their cruel practices, but they’re also loathe to risk even further negative publicity by prosecuting those who try to help tortured and suffering animals.”

That suffering has been a flashpoint for those on both sides of the foie gras issue. While gourmet enthusiasts insist that force-feeding ducks merely replicates the pre-migration gorging the birds naturally experience (energy is stored as fat for long flights), animal rights activists and many veterinarians argue there is nothing natural about it. For one thing, Moulard are not migratory birds; indeed, they are artificial hybrids. Moreover, ducks in nature only double the size of their livers. When a bird’s liver expands to ten times its normal size, his entire body is affected. “Grossly enlarged livers are less able to perform their function of cleansing the bloodstream of waste products from the body,” explains avian veterinarian Laurie Siperstein-Cook. “The swollen livers also put pressure on the abdominal airsacs, which impairs the bird’s ability to breathe. They also push the legs out laterally, making it difficult for the birds to walk properly.” It is not uncommon for a duck’s liver to literally explode from overeating. By the time the duck is slaughtered, his liver has succumbed to a disease known as hepatic lipidosis.

Blum says she was dismayed by how her arrest highlighted the view of ducks as matter without spirit. “It deeply saddened me to see that people’s priorities could be so topsy-turvy; that these animals, who could now swim and preen and enjoy the sun and life for the first time, were being treated as property and that this was the rationale behind the charges against me,” she says. “In the end, having the charges dropped, I can only hope, is a small sign that the reality of the foie gras industry is so harrowing people cannot fall back on easy arguments that animals are merely property, and I think that the continuing legislative efforts to protect animals against this horrific forced-feeding bears this out.”

“We certainly did not want to go to prison,” adds Shapiro. “But we absolutely recognized that no punishment would be as bad as what the 500,000 ducks in foie gras farms or the ten billion animals on factory farms in the U.S. go through every year. No jail cell is more restrictive than an isolation cage, and we were eager to confront the charges against us and to shine the spotlight on these egregious and horrific practices. I think once this became apparent, HVFG simply wasn’t interested in having that level of attention remain on them for that long.” He acknowledges that while GourmetCruelty.com is illuminating the horrors of factory farming, the Patriot Act is casting an ominous shadow over them. “The cynical exploitation of September 11th to marginalize animal advocates as terrorists was deeply troubling to us,” he says. “While we were very worried about it, it doesn’t appear we’ve been labeled ‘terrorists.’ But we’re definitely always mindful that we, like all animal advocates, are vulnerable to serious harassment under the guise of security measures.”

It is apparent that activists are making it more difficult for animal agriculture to carry on with business as usual—and facing the consequences of their actions more frequently. “As we speak,” says Blum, “members of the animal protection group Compassionate Consumers, who recently concluded an investigation and open rescue at battery cage egg farms controlled by Wegmans, are also facing charges in New York State. It seems clear that factory farmers have become increasingly threatened by animal advocates exposing the appalling conditions at their facilities and are becoming more desperate in their responses.” When the charges against them were dropped, Blum and Shapiro agreed not to enter HVFG again, though each remains committed to the group’s investigative work (assisted by the Animal Protection and Rescue League). “Though I cannot go back to HVFG, I can wake up each day and work to close them,” says Blum. “And that is just what GourmetCruelty.com intends to do. The whole experience of my arrest, and its aftermath, has only strengthened our resolve and our ability to put an end to the cruelty that is foie gras.”

http://www.satyamag.com/oct05/hawthorne.html
Add Your Comments
Support Independent Media
We are 100% volunteer and depend on your participation to sustain our efforts!