Add an Event
Newswire
Calendar
Features
Home
Donate
From the Open-Publishing Calendar
From the Open-Publishing Newswire
Indybay Feature
Publish to Newswire
Add an Event
Related Categories: U.S. | Health, Housing & Public Services
No Compassion at the George R. Brown Convention Center in Houston
by ~Bradley (bradley [at] riseup.net)
Monday Sep 19th, 2005 4:04 PM
On Saturday September 17, Vinny and I were on our way to the Reliant Arena, but we got a little lost in the sprawling city of Houston, Texas so we made our way to the George R. Brown Convention Center first. This convention center is next to the new baseball stadium where tens of thousands of people were watching an Astros game. Nobody seemed to care that in the building next to the baseball stadium, more than a thousand people are still struggling to survive the aftermath of Hurricane Katrina. 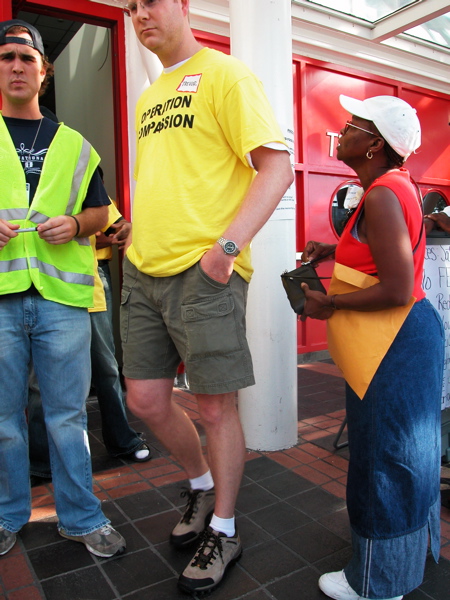 The first thing we saw as we walked up to the George R. Brown Convention Center was a women being turned away from services at the Convention Center. I immediately pulled out my camera and began taking photos, but the police told me that i was not allowed to take photos. They told me that I had to visit the Media Check In area first.

We walked down to look for the Media Check In area, but we could not find the people we needed to check in with. We were inside the building at this point, but neither the people with Red Cross nor the Information Center were able to provide information as to where we could check in. So we just kept on walking around looking for Media Check In and were approached by several police officers. The officers gave us contradicting information. We were told that Media Check In was on the third floor and that we could check in there. Then at the same time, we were told that we had to leave the building. As the police were kicking us out of the George R. Brown Convention Center, I stopped for a second to take a photograph of the living conditions inside this shelter for hurricane survivors.

After being kicked out the building and told there was no more Media Check In, we started to walk back to our car. On the way, two texas state police officers rode by us in a golf cart and talked to us for a couple minutes. They told us to go right back where we were and to ask to speak with a Public Information Officer (PIO) and then we would be able to walk inside the building.

We saw a man named Bobby being forcefully removed from the Convention Center. He was complaining to the officers that he had a bad back and that they were mistreating him. Bobby had papers from a doctor with documentation about his back condition and a prescription for medication, yet three Texas State Police officers were throwing him out onto the street.

The only signs we saw regarding services were ones that listed the services which were NOT available. No FEMA, NO Red Cross, No Vouchers, No Tzi Chi vouchers, No Neighborhood Centers, No Medication Refills, No Eye Exams, No Dental Care and No Immunizations.

There were a lot of people wearing yellow shirts with the words "Operation Compassion" printed in bold black capital letters on the front of the shirt. They were not providing any compassion to the people who needed help. A man in an "Operation Compassion" shirt turned his back and walked away from a women who needed help. There are still thousands of people in Houston that desperately need help and resources because of the flood, yet there was a whole bunch of people wearing "Operation Compassion" shirts as they walked around in front of the George R. Brown Convention Center looking for trash to pick up. There was a line of these people all walking past the same gutter with big empty trash bags and occasionally finding a cigarette filter to throw in their big plastic bags. This was a HUGE waste of time and part of the racism being directed at survivors.

The powers that be, such as the Federal, State and Local Government, FEMA, the large "Charity Organizations" as well as the corporate media are doing their best to cover up the fact that many people are still suffering at the George R. Brown Convention Center. They are only allowing certain types of media journalists into the Center and trying to ensure that the media organizations are accompanied by "Public Information Officers." 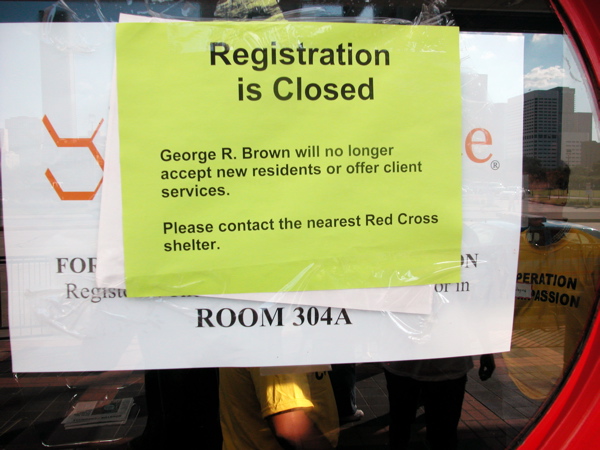 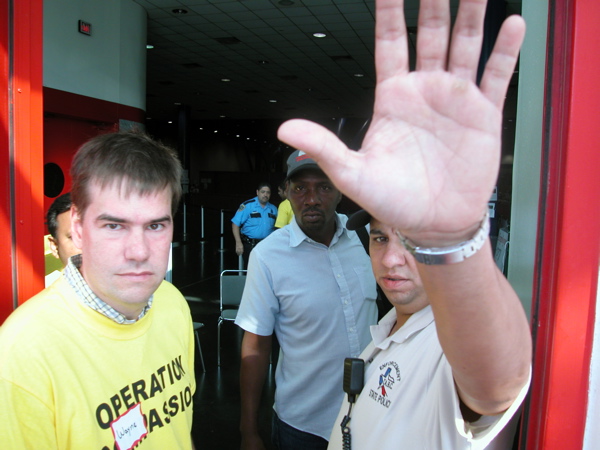 A Texas State Police officer tries to prevent me from taking photos
§No Media
by ~Bradley (bradley [at] riseup.net) Monday Sep 19th, 2005 4:04 PM 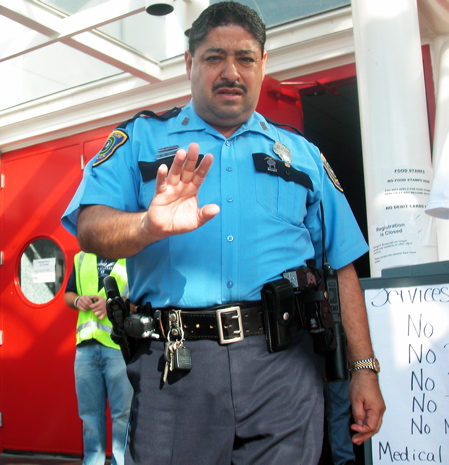 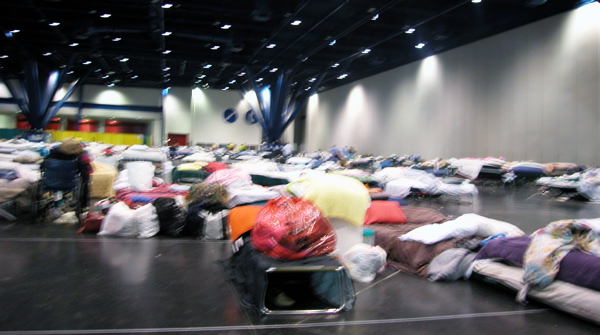 As the police were kicking us out of the George R. Brown Convention Center, I stopped for a second to take a photograph of the living conditions inside this shelter for hurricane survivors.
§Only Certain Media
by ~Bradley (bradley [at] riseup.net) Monday Sep 19th, 2005 4:04 PM 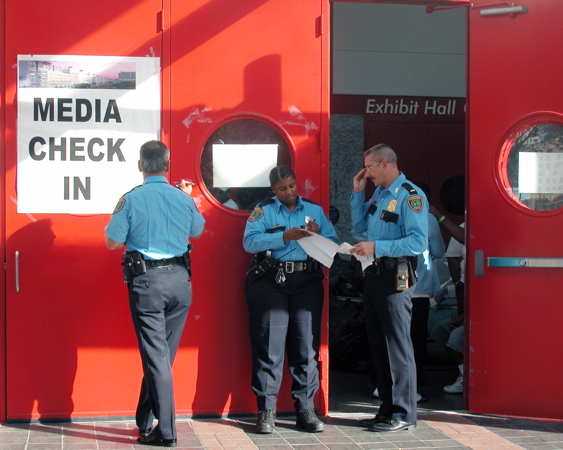 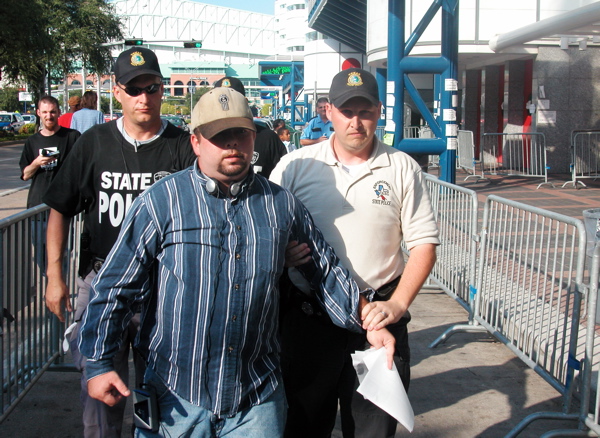 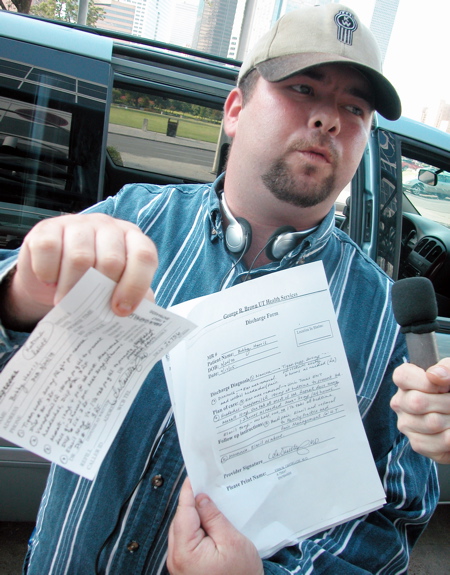 Bobby had papers from a doctor with documentation about his back condition and a prescription for medication
§Searched
by ~Bradley (bradley [at] riseup.net) Monday Sep 19th, 2005 4:04 PM 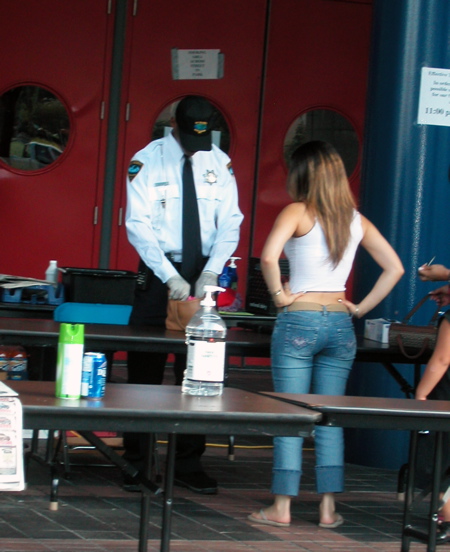 People had their bags and bodies searched as they entered the George R. Brown Center
§No Services
by ~Bradley (bradley [at] riseup.net) Monday Sep 19th, 2005 4:04 PM 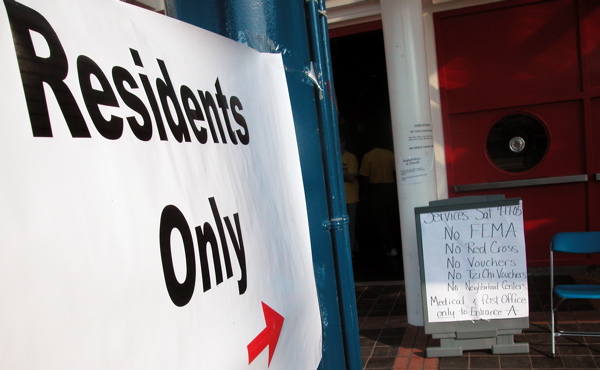 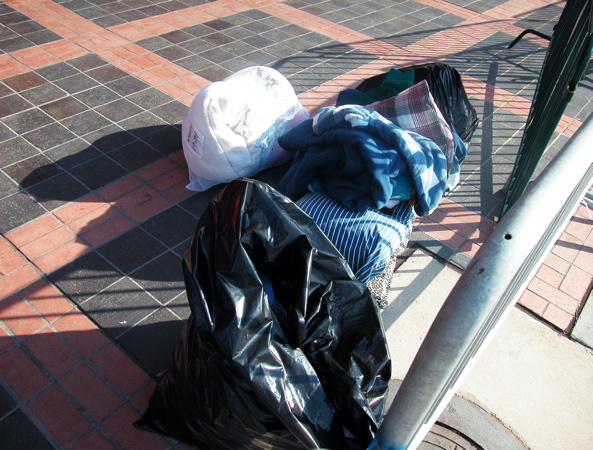 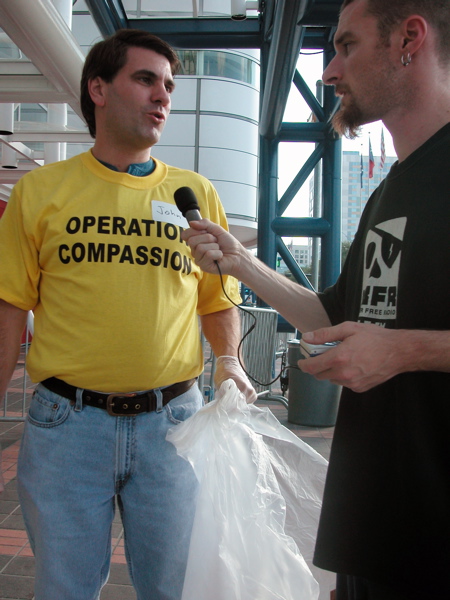 not providing compassion to the people who needed help
§What Trash?
by ~Bradley (bradley [at] riseup.net) Monday Sep 19th, 2005 4:04 PM 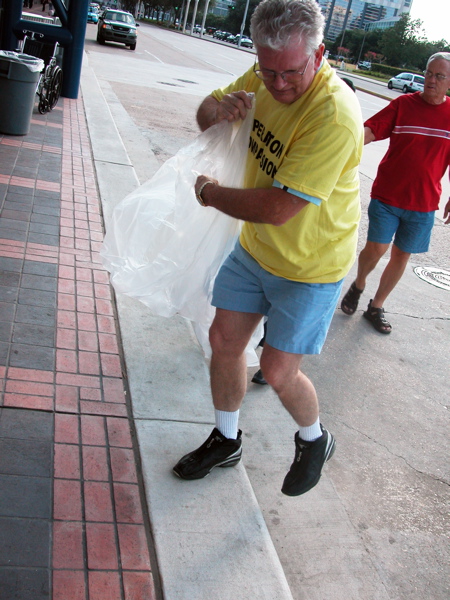 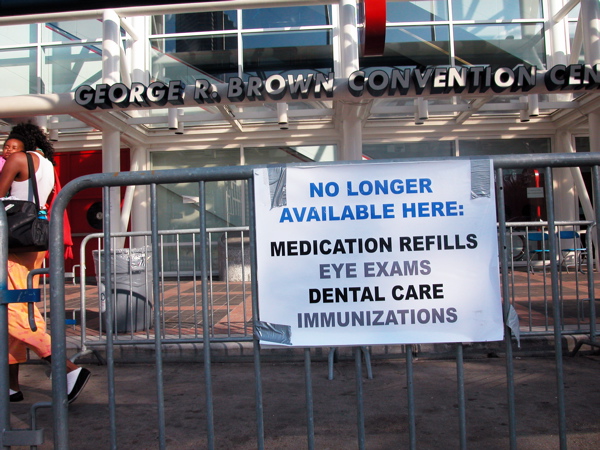 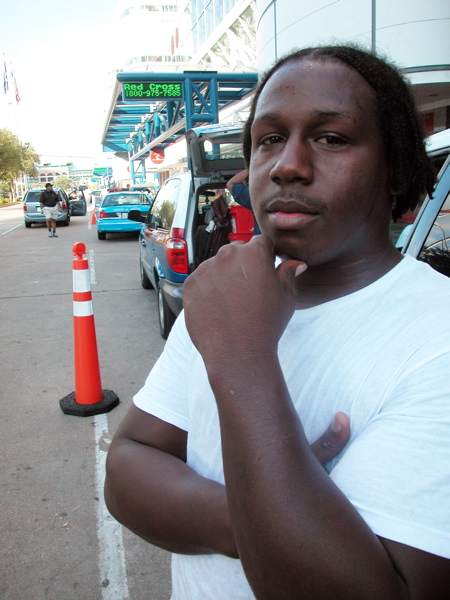 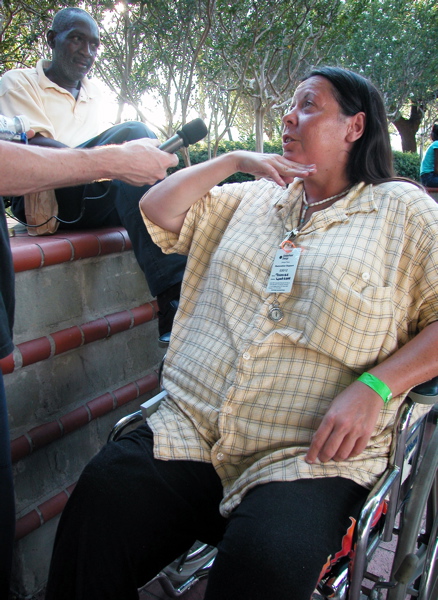 showing the water level during the flood
Add Your Comments
LATEST COMMENTS ABOUT THIS ARTICLE
Listed below are the latest comments about this post.
These comments are submitted anonymously by website visitors.