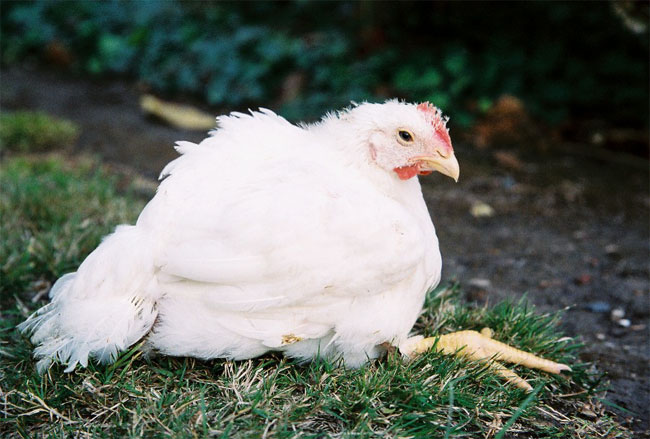 The group’s graphic documentation (available at http://www.fosterfacts.net) reveals systematic animal neglect at Foster Farms’ poultry operations. This year, EBAA asked for a tour of the company’s chicken farms. The tour request was denied.

In honor of September’s National Chicken Month, EBAA is calling on Foster Farms to discontinue its misleading Pure Honest to Goodness marketing campaign and improve conditions for its birds.

East Bay Animal Advocates is a non-profit organization based in the San Francisco Bay Area. Exposing animal cruelty in modern agriculture is of utmost importance to EBAA. Through direct aid and education outreach, EBAA is dedicated to fighting and preventing animal abuse in California's agricultural industry and beyond.

http://www.fosterfacts.net
§Fostering Cruelty in Chicken Production
by EBAA Friday Apr 7th, 2006 12:07 PM
Copy the code below to embed this movie into a web page:
Download Video (12.2MB) | Embed Video
6:06 Web-optimized QuickTime video at 12MB
Add Your Comments
LATEST COMMENTS ABOUT THIS ARTICLE
Listed below are the latest comments about this post.
These comments are submitted anonymously by website visitors.