Add an Event
Newswire
Calendar
Features
Home
Donate
From the Open-Publishing Calendar
From the Open-Publishing Newswire
Indybay Feature
Publish to Newswire
Add an Event
Related Categories: U.S. | Health, Housing & Public Services
The Surreal Scene of Dome City
by ~Bradley (bradley [at] riseup.net)
Friday Sep 9th, 2005 7:23 PM
On September 9, myself and two other west coast IMCistas arrived in Houston, Texas to help provide independent media coverage from Houston and other communities. Our first stop was the Astrodome and surrounding buildings. There are about 10,000 people now living in these buildings, which are now being called "Dome City." 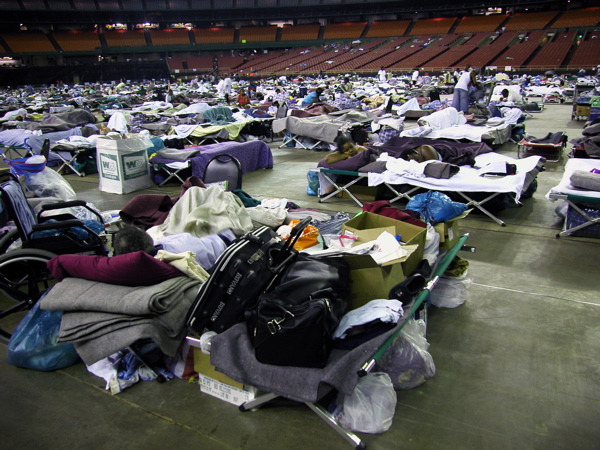 The scene in the Astrodome is almost unreal. There are thousands of people sleeping in close proximity. Many people are trying to get in contact with loved ones, but there does not seem to be a practical way to facilitate this.

There seems to be very little organization, plenty of unanswered questions and almost no information about what the future holds for Hurricane Katrina survivors.

Some clothing and food is being provided to people, however the food is very low in nutritional value and much of the clothing is inadequate. Many people here have health conditions which are not being cared to. For example, many folks are diabetic, yet most of the food being offered is full of sugar, such as donuts and twinkies.

One man I spoke with told me that he was able to drive his family out of New Orleans before the Hurricane struck. He has been at Astrodome in Houston for about a week. He is happy that he was able to leave New Orleans with his family, but now he is almost out of money and is unsure of what is going to happen next. He was waiting in line for a Red Cross Debit Credit worth $2,000. He waited in line yesterday for this debit card, but then FEMA and the Red Cross stopped handing out cards. Many people waited in line and had nothing to show for their time spent waiting. He told me that people do not know what the future may hold... that people do not know what tomorrow holds.... that people do not know what will happen today... that people have no idea what will happen with the line they are again waiting in.

People are just waiting and doing their best to maintain a positive outlook on the entire situation. 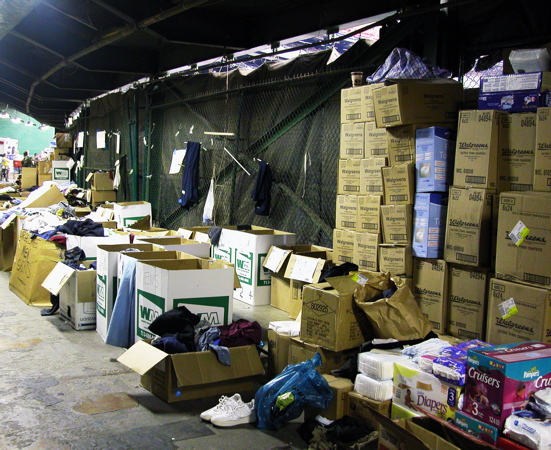 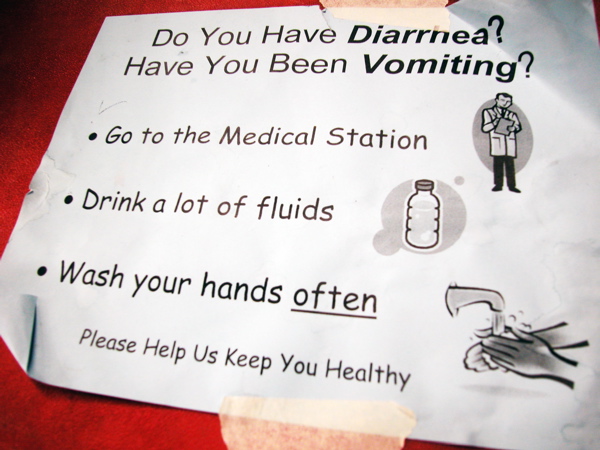 many folks inside the dome are suffering from diarrhea and vomiting
http://houston.indymedia.org
§looking down
by ~Bradley (bradley [at] riseup.net) Friday Sep 9th, 2005 7:23 PM 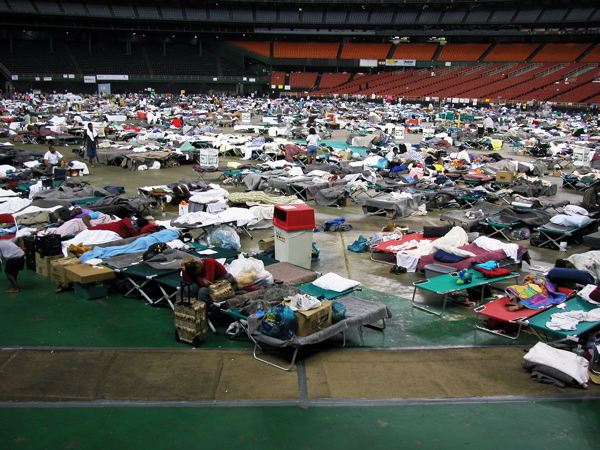 a look down on the floor of the Astrodome
http://houston.indymedia.org
§line for debit
by ~Bradley (bradley [at] riseup.net) Friday Sep 9th, 2005 7:23 PM 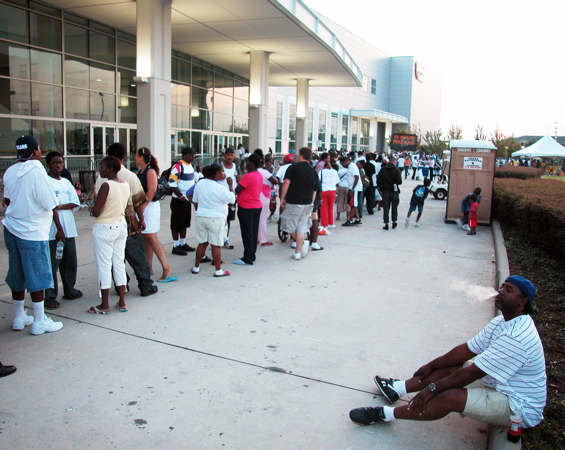 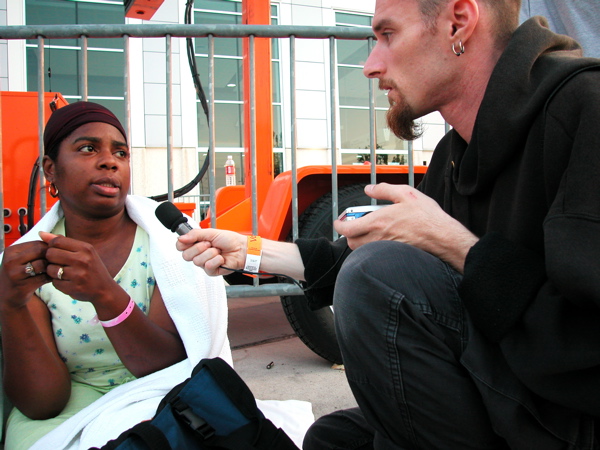 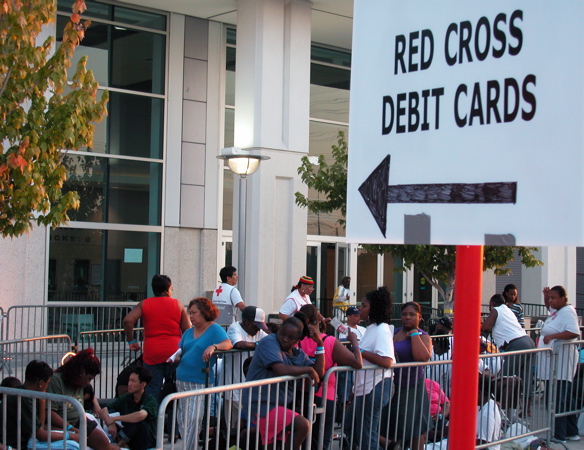 many people waited inline for several hours yesterday... and then FEMA and the Red Cross stopped giving out debit cards. So once again, people got in line, and waited....
http://houston.indymedia.org
§the otherside
by ~Bradley (bradley [at] riseup.net) Friday Sep 9th, 2005 7:23 PM 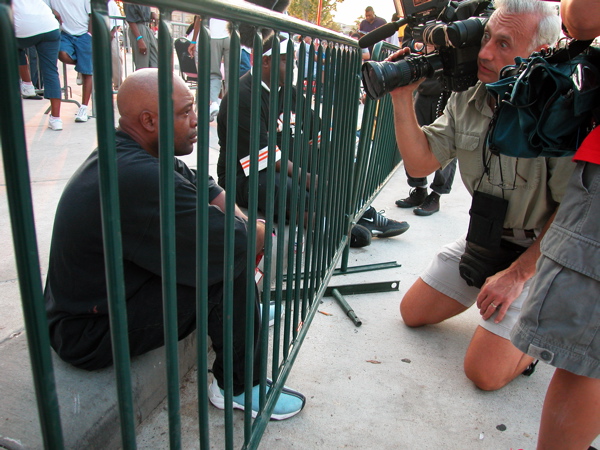 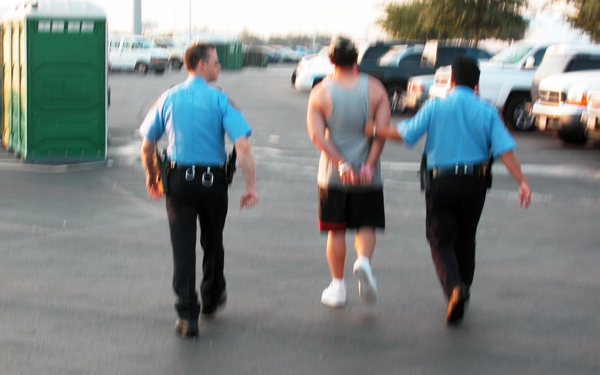 as i took this photo, two other cops walked past me and said, "no big deal, just somebody in handcuffs."
http://houston.indymedia.org
§were not fema
by ~Bradley (bradley [at] riseup.net) Friday Sep 9th, 2005 7:23 PM 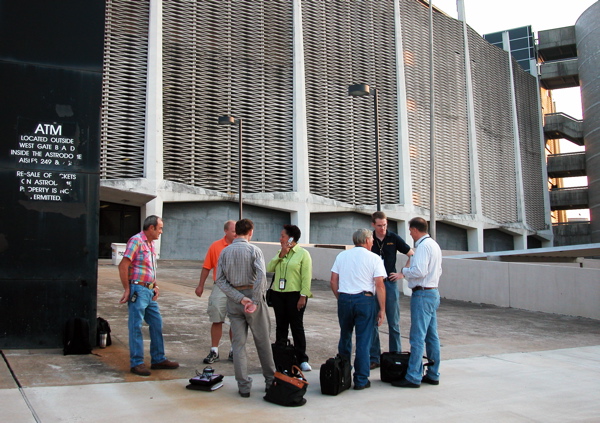 These folks were all wearing badges that said, "FEMA." We tried to get them to comment on the situation and they brushed us off. We asked, "Is there anyone we can speak to from FEMA?" A man in charge replied, "We're not FEMA."
http://houston.indymedia.org
§access denied
by ~Bradley (bradley [at] riseup.net) Friday Sep 9th, 2005 7:23 PM 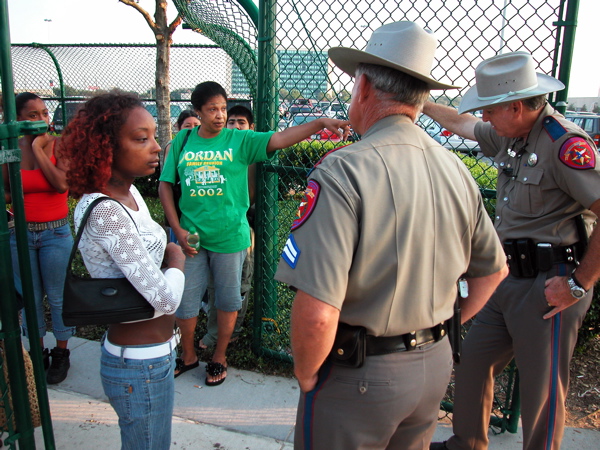 These people were not being allowed to re-enter the Astrodome where they have been staying. It seems a curfew is being put in place and people are being told they can not come and go as they please.
http://houston.indymedia.org
Add Your Comments
LATEST COMMENTS ABOUT THIS ARTICLE
Listed below are the latest comments about this post.
These comments are submitted anonymously by website visitors.