Add an Event
Newswire
Calendar
Features
Home
Donate
From the Open-Publishing Calendar
From the Open-Publishing Newswire
Indybay Feature
Publish to Newswire
Add an Event
Related Categories: U.S. | Anti-War
Photos from Crawford Pro-War Rally; 'Protest Warriors' Attacked by Rightwing Mob
by Jeff Paterson (jeff [at] paterson.net)
Sunday Aug 28th, 2005 12:14 PM
About two thousand people converged in Crawford yesterday for the “Cindy Doesn’t Speak for Me” rally. “Gold Bless America, God Bless the Troops, and God Bless President Bush” was the theme of the day. However, in a odd turn of events, and despite repeated pleadings that “we are on your side, we are on the right,” the rally turned on conservative Protest Warriors. 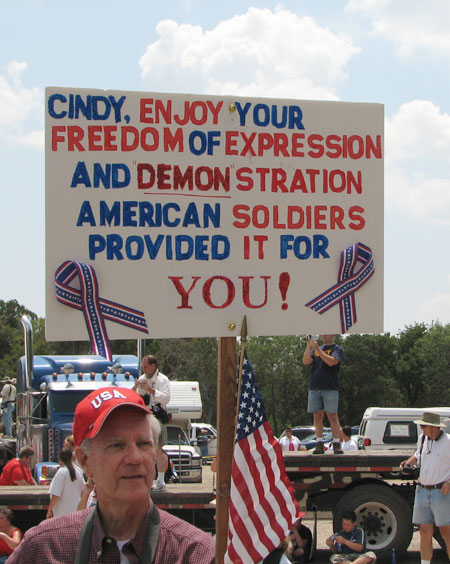 About two thousand people converged in Crawford yesterday for the “Cindy Doesn’t Speak for Me” rally. “Gold Bless America, God Bless the Troops, and God Bless President Bush” was the theme of the day. Favorite chants included, “Cindy Go Home!” and “What’s Our Exit Strategy? Victory!” Many of the speakers were AM radio talk show hosts from across the country.

The theme of most of their speeches was that Cindy Sheehan was prolonging the war by giving hope to the terrorists. “Iraqis love us… and we are winning.” “The media is currently on a anti-American rampage… Insurgents love the U.S. media.” Darrell Ankarls of 570 KLIF AM radio boomed from the stage that “Cindy’s stuff is making into the sandbox” and it is “getting our boys killed.” Cindy should “shut up” and “go home!”

I had heard that military recruiters were going to be on hand to sign up the youth who attended the rally. I did over hear two young women excitedly talking about having just “jumped in, and sign up.” However, it turned out that they were talking about having signed up for the University of Texas Young Republican Club. It was announced that a woman riding around the parameter of the rally on a beautiful horse was the mother of a teenager who was waiting to enter the military.

Free Republic and the their right-wing youth group of “ironic” Protest Warriors were repeatedly thanked for their support and participation in the rally. The Protest Warriors are young people who usually appear at anti-war related activities with slogans based on “right-wing irony,” such as “War Has Never Solved Anything (except for everything).” However, in a odd turn of events, and despite repeated pleadings that “we are on your side, we are on the right,” the rally turned on these kids. Shouting “Cindy Go Home!” a small mob gathered around the three or four Protest Warriors, attacked their oversized signs, and began stomping on the signs.

Visibly shaken, the Protest Warriors beat a retreat from the rally to the chants of “Get Out of Here Liars!” Over and over again, “We are on your side” were meet by “Liars!” One man clarified that even if they were trying to support the war, they were confusing people, and that “it is the devil who wanted to sew confusion.” It is safe to say that irony, or any opinions that hinted at “shades of gray” were not welcome in Bush Country. 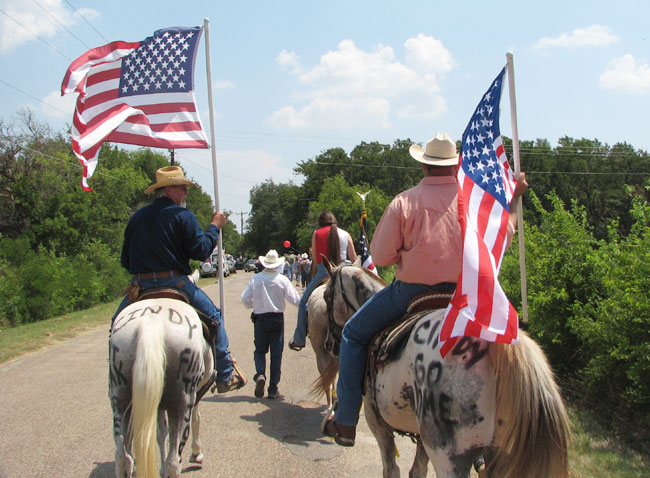 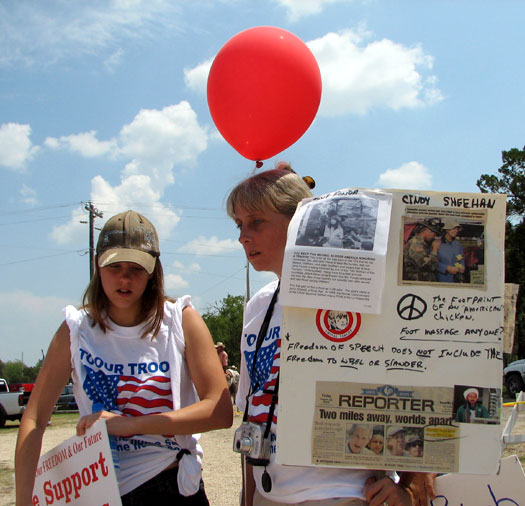 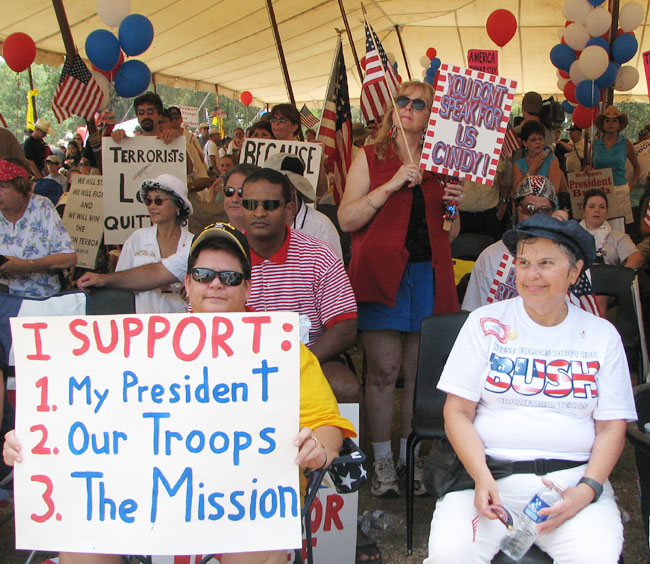 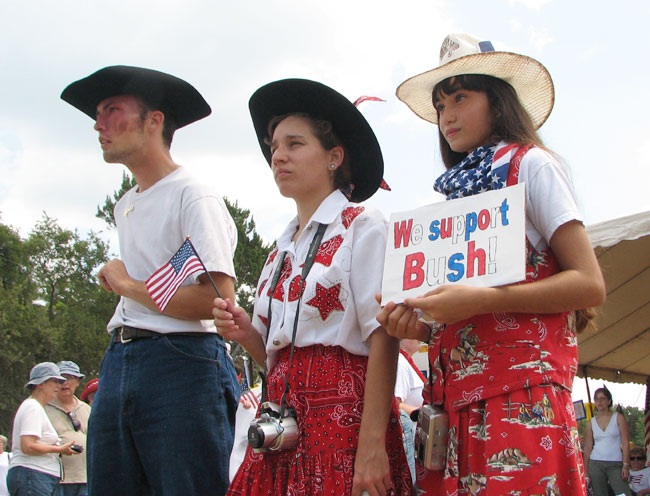 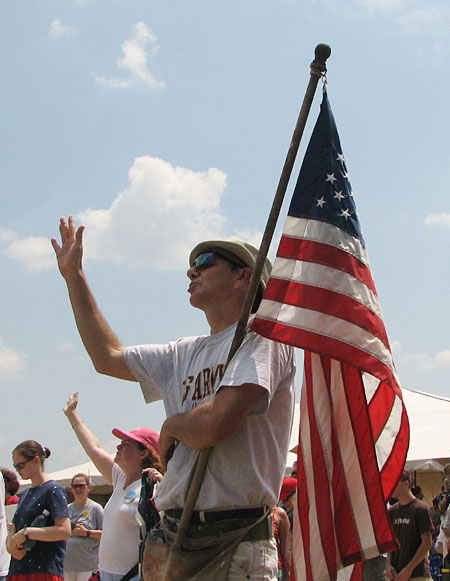 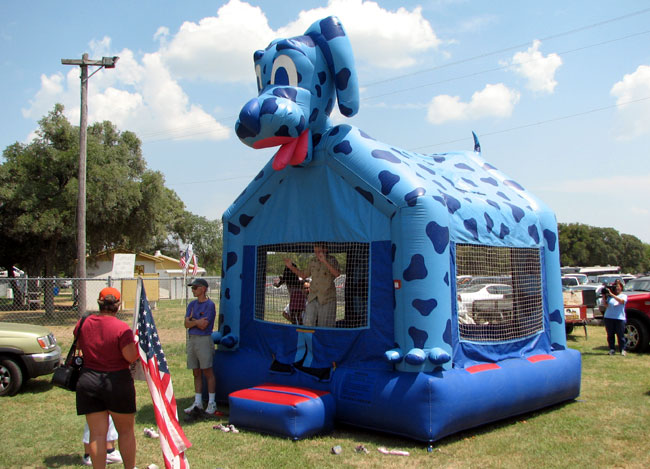 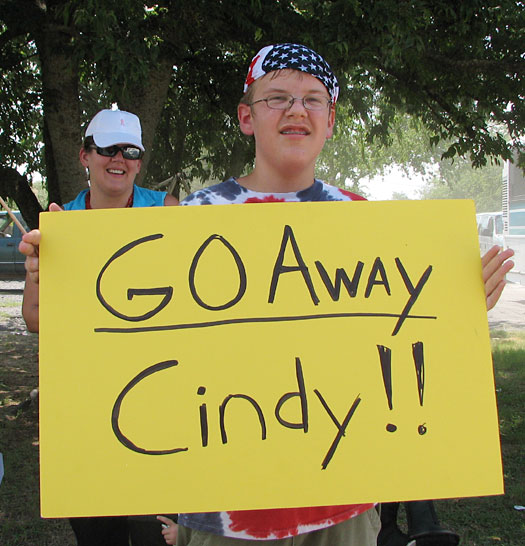 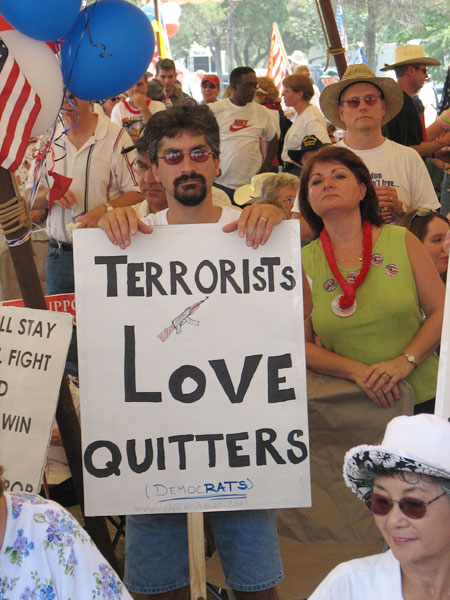 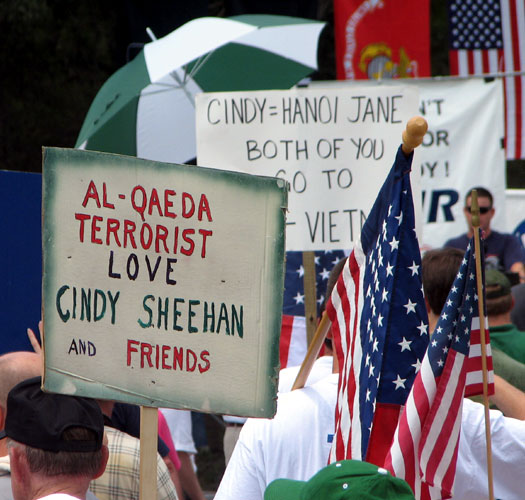 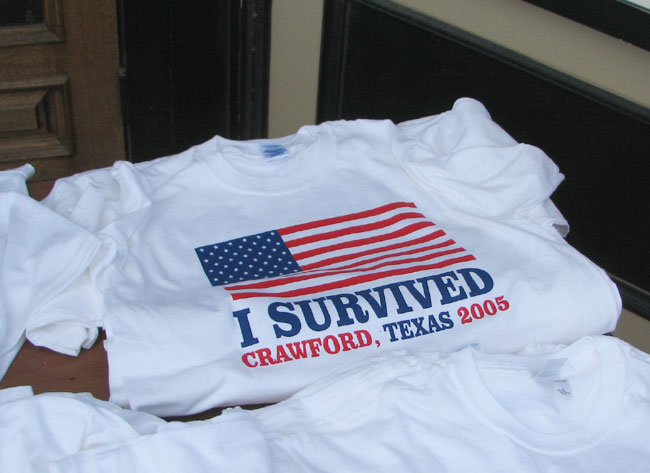 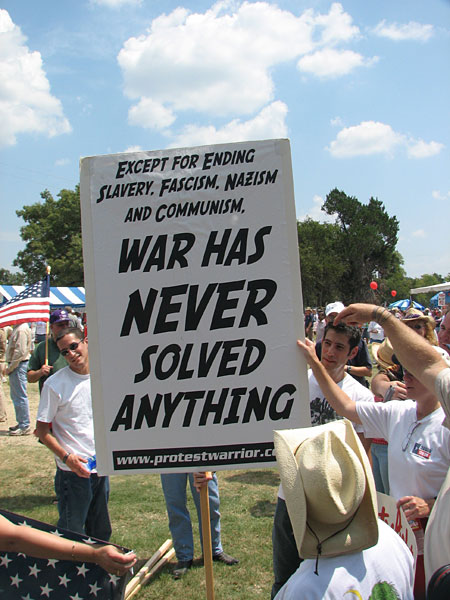 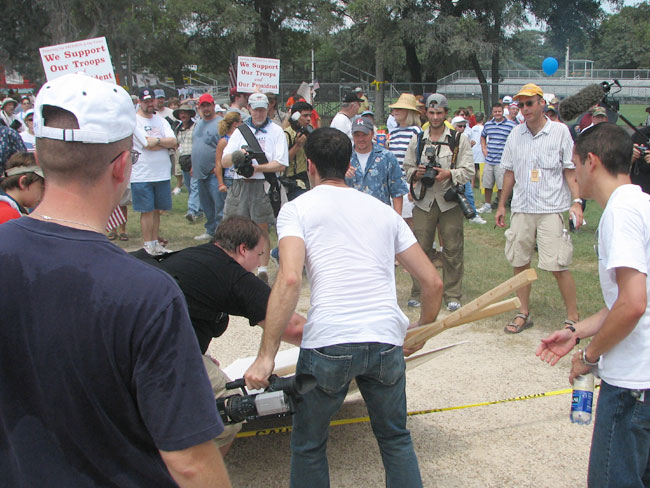 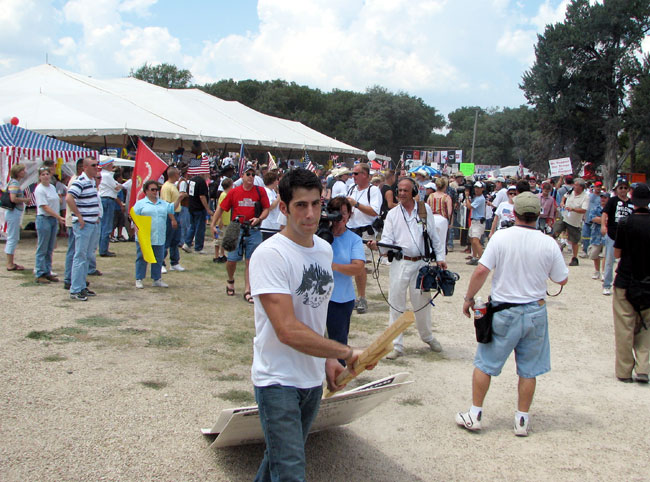 §Whyd id they kick him out?
by What a burn!!!hahahaha
Sunday Aug 28th, 2005 1:51 PM
Why d id they kick him out? No difference, just a stupid...
Add a Comment
§coverage
by hehe
Sunday Aug 28th, 2005 1:54 PM
At the pro-Bush rally, there were some heated moments when two members of Protest Warrior, a group that frequently holds counter protests to anti-war rallies, walked in with a sign that read "Say No to War - Unless a Democrat is President."

Many Bush supporters only saw the top of the sign and believed the men were war protesters, so they began shouting and chasing the pair out.

One man tore up their signs. When Will Marean of Minneapolis kept repeating that he was on the Bush side and tried to explain Protest Warrior's mission, one Bush supporter shook his hand and apologised.

FReepers score own goals in Crawford

A handful also got themselves arrested, including a protester whose anti-Sheehan sign was deemed unnecessarily offensive by organizers of a
large pro-Bush rally. The man carrying the sign became violent when he was asked to put it down.

Ken Robinson, of Richardson, Texas, who described himself as aVietnam veteran, was carrying a sign at a “You Don't Speak for Me, Cindy!” rally. The sign read, “How to wreck your family in 30 days by ‘b**** in the ditch' Cindy Sheehan.”

Kristinn Taylor, an event organizer with FreeRepublic.com, heard about the sign and rushed up to Robinson.

“This is our rally and you can't do that here,” he said, only for Robinson to insist he was within his rights.

Camera crews rushed in and Taylor turned to face them.

“To all the media here, this sign is not representative of the crowd
here today,” Taylor announced. Some of the crowd around Robinson came
forward to shake his hand, while others chanted, “Idiot, go home.”

The two men then squared off and raised their voices.

“Just get outta here!” Robinson yelled, and aimed a kick at Taylor's midsection. Taylor called for security, and a young Woodway policeman
quickly showed up.

“I have the right to freedom of speech,” Robinson said.

Robinson continued to protest loudly as police handcuffed him and led him away.


The only way the sign wouldn't be "“representative of the crowd here today,” is if there weren't any Freepers there, because as you can see here and here, the sign is highly representative of Freeper attitudes and rhetoric, more shame to all of them.  The Free Republic website is monitored, highly censored and demands conformity of ideology so if posts calling Cindy Sheehan "The bitch in the ditch" or "Ditch Bitch" were unwelcome, they'd be out of there.  They're displayed in all their vicious glory still.

Were there Freepers in Crawford this weekend?  Well, who else would be stupid enough to attack their fellow pro-war Republicans?  Apparently, some reading-challenged Freepers were enraged at some Protest Warrior signs that were sufficiently complex for the message to go right over their heads, so they did what comes naturally to them - they eliminated them.

AP reports: At the pro-Bush rally several miles away, there
were some heated moments when two members of Protest Warrior, a group
that frequently holds counter protests to anti-war rallies, walked in
with a sign that read "Say No to War Unless a Democrat is President."


Many Bush supporters only saw the top of the sign and believed the men
were war protesters, so they began shouting and chasing the pair out.
One man tore up their signs. When Will Marean of Minneapolis kept
repeating that he was on the Bush side and tried to explain Protest
Warrior's mission, one Bush supporter shook his hand and apologized.

A Freeper who was there posted, "Even the "victim" admitted that he could see how the misunderstanding could happen. But it WAS quite a scene, and I think the poor guy was literally terrified."

Add a Comment
§That he was one of them
by Hilarious! The idiots didn't even realize
Sunday Aug 28th, 2005 4:53 PM
That he was one of them...another brainwashed sheep of the right-wing propaganda media. Hahahahahahah! I love it! Buncha reneck troglodytes. LOL!
Add a Comment
§feeding frenzy
by toxic
Monday Aug 29th, 2005 5:42 AM
This is hilarious. Those fuckers had a taste for blood. Good thing they took it out on one of "their own".

But it was cool that the (staged) press coverage of Cindy Sheehag was lost for a bit, and Protest Warriors got some media coverage and were able to explain their mission and people around the world could see their signs.
Add a Comment
§&quot;a misunderstanding between friends&quot;
by ha, ha, it is to laugh
Tuesday Aug 30th, 2005 5:24 PM
"a misunderstanding between friends"

yeah, me and my friends regularly stomp eachothers signs at rallies and start mob-chants to run eachother off

you are trying to downplay it because it is an embarrassment to your cause and it reveals how absolutely moronic and violent so many of your pro-war allies are. but they are still your allies and you play the apologist for them here
Add a Comment
§They look like real mental giants, don't they?
by just like George Bush
Tuesday Aug 30th, 2005 7:55 PM 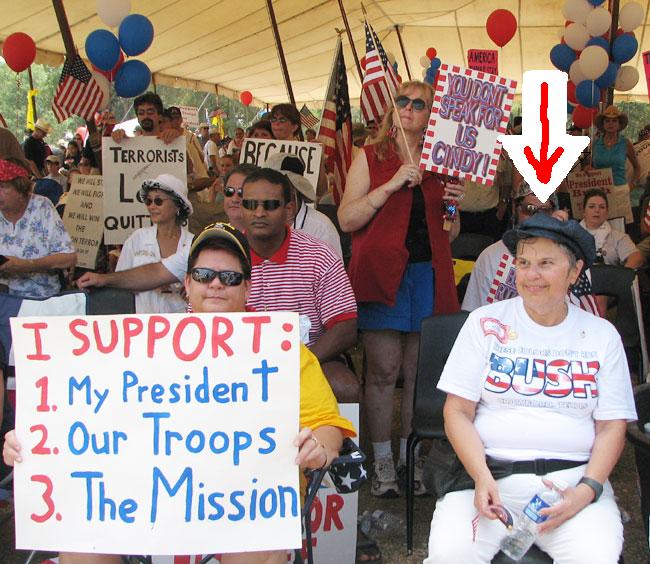 Especially this one
Add a Comment
§Wow, I am a Victim????
by Will Marean
(jhouserok [at] gmail.com) Tuesday Aug 30th, 2005 10:22 PM
Don't really see how I am a victim here, the only thing that happened was our one sign was torn up. The sign was Say No To War unless a Democrat is president. The other two signs were stomped and we left them where they lay. Those signs were thrown out over the first yellow police tape barrier, where we retrieved them. I got stuck reponding to the AP and every other media organization who wanted to capitalize on this misunderstanding. Apparently you guys at Indymedia had some of your media there too, taking the video, I saw it Sunday night at Camp Cindy II. Your group was very cordial to me, as I stayed to get some footage of debates between both sides. I also met Brad, who ran the radio program from Camp Cindi II, really nice people. On tuesday I was at your main site and had discussion with Code Pink members and a blogger from North Carolina.

Finally, making assumptions of people's intelligence because they may look ignorant is pathetic. It's like ripping on people with Down-syndrome cause they look abnormal. Great job making yourselves look like the donkeyhats you truely are.
http://jhouserok.blogspot.com
Add a Comment
§making fun
by cp
Tuesday Aug 30th, 2005 11:06 PM
oh, you never see any talk like that on the Free Republic at all, huh?

No discussions of how to mow down liberal antiwar protesters with trucks or guns, or cropdusters. No poking fun at personal appearance. none of that.
Add a Comment
§Freepers are not PW's
by Will Marean
(jhouserok [at] gmail.com) Tuesday Aug 30th, 2005 11:16 PM 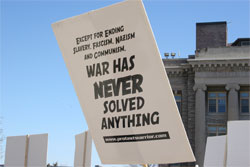 Really cannot speak for the FReepers, not a group member nor am I truely familiar with their group. I have video of our three man team entering the Bush Rally outside the Crawford Stadium to try and get PW's to spot us, we had over 20 people there, but most of us came without signs and group shirts that make it easy to ID. It's when we got ready to put up the least easy to misunderstand sign that we found out our name recognition wasn't as widespread as we thought.
Add a Comment
§Don't believe the AM-right-wing whack radio
by PW's are a joke
Wednesday Aug 31st, 2005 7:02 AM
Here's a little something about your flip-flopper-in-chief:
http://www.americanprogressaction.org/site/pp.asp?c=klLWJcP7H&b=118263
And don't forget the lies, and how the story changed:
http://www.geocities.com/jacksonthor/lieswmd.html
And let's not forget that Iraq was in the sites for many years:
http://www.newamericancentury.org/iraqclintonletter.htm
And also, we armed Saddam when it was convenient and turned our heads when he was commiting atrocities:
http://counterpunch.org/dixon06172004.html

Add a Comment
§Footprint of
by OneTopJob6
Thursday Sep 1st, 2005 3:08 PM
The American Chickenhawk.
Add a Comment
§Mental?
by dgz
Thursday Nov 10th, 2005 2:40 PM
how special
Add a Comment
§Fucking twits...
by Mr America
Wednesday Mar 8th, 2006 8:40 AM
Nothing like trying to stifle dissent. Can't take the criticism of your retarded 'leader?' Get used to it. The fan is about to hit the shit in a big way, you bunch of inbred toothless fucktards!
Add a Comment
Support Independent Media
We are 100% volunteer and depend on your participation to sustain our efforts!