Add an Event
Newswire
Calendar
Features
Home
Donate
From the Open-Publishing Calendar
From the Open-Publishing Newswire
Indybay Feature
Publish to Newswire
Add an Event
Related Categories: San Francisco | Arts + Action | Fault Lines
35 Years In the Da Mission
by Ana Fletes
Friday Aug 19th, 2005 2:17 PM
2005 marks the Galería de la Raza’s 35th year as a multi-disciplinary community arts space. Since its founding by the two renegade political activists/artists Ralph Maradiaga and René Yañez in the late 60’s, the Galería has consistently engaged in some of the most complex political, social, and cultural art practices on this side of the Mississippi. 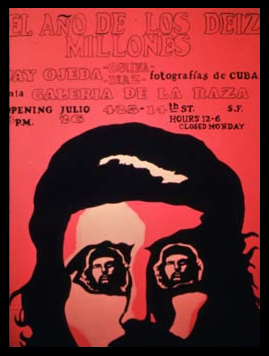 2005 marks the Galería de la Raza’s 35th year as a multi-disciplinary community arts space. Since its founding by the two renegade political activists/artists Ralph Maradiaga and René Yañez in the late 60’s, the Galería has consistently engaged in some of the most complex political, social, and cultural art practices on this side of the Mississippi.

Initially, the Galería was an informal/formal training ground for many of the young, aspiring grassroots political organizers of the 1960’s. Alas, someone had to create the posters for the political organizing that would galvanize the Mission in the 70’s: they had to represent the folks living in the neighborhood affected by the Vietnam war while simultaneously representing economic and cultural marginalization resulting from the fiercely racist immigration and migrant worker policies that affected many more of the Mission residents. The Galería evolved into an artist collective, hosting poster design workshops for the community and fueling the imagination and skills of many of the artists that grew out of the Chicano arte movement. Inevitably, the Galería bore the mark of the strong grassroots organizing that later folded into the larger migrant movement led by Cesar Chavez and Dolores Huerta.

The artists that ran the Galería were also part of the larger ‘Mission’ community before the Mission became ‘The Mission’ and transformed itself along with ‘Chinatown’ into another destination on the cultural tourist map. And, although The Mission is still brimming with a frenetic energy that is elsewhere hard to find, it’s also ill-advised to eulogize or romanticize ‘those early years’ as the bygone years of the Galería: a luxury that a Latino arts space cannot so easily lean against. The Mission continues to provide the complex context from which many artists draw from and a place from which Galería history can claim a strong, visual identity.

Galería’s 35th Anniversary visual arts programming is a continuation of how the Galería has managed to stay fresh, relevant, and engaging to an ever fickle and changing audience. Through the years, Galería artists have varied in their disciplines and styles, at times borrowing from Chicano themes, Aztec mythology and Latino pop-cultures directly, while at others creatively reinventing narratives to reflect an increasingly multi-cultural and complex reality.

Re-engaging many of the founding artists in the visual arts programming has proved a well-crafted potion of artistic survival of which TRAZOS: MYTH AND MEMORY is the latest result. In TRAZOS, historical themes re-emerge as super-Latino myths alongside their pre-Columbian imagery. TRAZOS presents the inter-generational artists exploring the real and imagined North/South borders of Chicano/Latino Art. Chicano art persistently returns to the rich iconography of Aztec mythology and Latino cultural traditions either as a means for cultural affirmation, for nostalgia, or to redefine and re-appropriate traditional symbols.

Trazos will present pieces by 18 artists working in all media to revisit the spectrum of Chicano/Latino cultural imagery. From pre-Columbian legends to virgins and cholos and back to luchadores and zoot-suiters, Trazos revisits folk traditions, Mexican mythology, and urban Latino culture: scanning the images and memories that exist at the intersection of North and South, of ancient and modern tales, and of mainstream and subcultural icons. Together the artworks in Trazos explore the contradictions of a cultural legacy that bridge both sides of the border. Like our first exhibition Weedee Peepo: Icons, Portraits, y Gente , TRAZOS is infused with a 35 year legacy that’s more myth than memory, and more memory than myth. 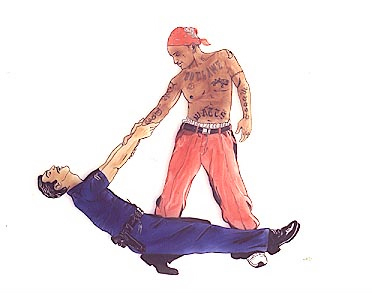