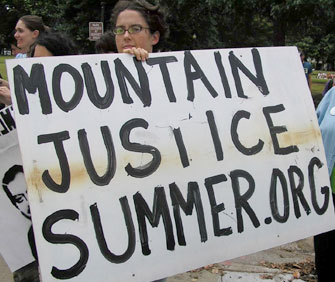 The primary focus of the actions was the issue of Mountain Top Removal, but connections were made to the global struggle against global capitalism’s dominance over every sector of people’s lives.

Around noon, the crowd in Monroe Park was nearly 300 people strong. The scene was festive, lively and diverse. Residents of Coal River Valley addressed the gathering, sharing their experience living under the shadow of Massey's aggressive mining operations. The sound of drums whistles and bells filled the air.

At last minute, Governor Warner of Virginia asked West Virginia residents and MTR activists to a meeting. 6-7 are met with him, and 4-5 stayed at the rally.

The crowd marched down Franklin Street, filling the air with voices and drums, and handing out informational flyers to onlookers. Police presence was low, but they did surround the march and prevent interaction with traffic. The protestors arrived at Massey’s headquarters, and banners were used to block off an area and allow a group of protestors to lock down in front of the building and a group of supporters to link arms in front of them.

Massey Corp. sent all of the nonessential employees home early. Nine protesters, with the "Stop Destroying Us" banner, moved to the Main Street parking garage, which Massey employees had been exiting from.

At 3 o’clock, the police informed the protesters that their permit had expired. The crowd decided with almost universal consensus that they wanted to stay. Protestors prepared for a possible police confrontation by blockading the area with reinforced banners, bicycles, and police blockades that were street. They remained until 4 when after confrontation and negotiations the people blockading the doors the Massey headquarters and the exit to the parking garage made a tactical decision to leave and march back to the park.

People arrived back at the park cheering, waving flags, and banging drums. They filtered through the park and back to the Pace center, ready for food, water and rest. The Mountain Justice Summer campaign lives on in the mountains and hills of Appalachia, as well as the hearts of all those who participated today. A resounding voice was heard today; we want control of our homes, our communities and our resources! 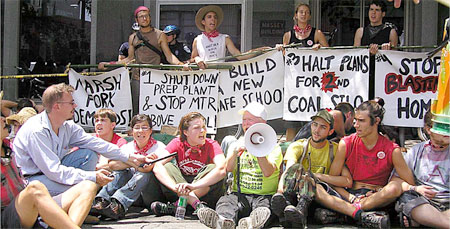 In the comment section of the breaking news feature, Jeff Winder writes concerning the lockdown in front of Massey headquarters:

\"As one of the police liasons during the march and action, I was very surprised to read the inaccurate report that those locked down had agreed to unlock after negotiations with police and in exchange for not being arrested. This is abosolutely untrue. At no point during any discussions with the police did we grant any concessions. We held the intersection for two hours beyond the expiration of our permit before deciding on our own to march back. The decision people made to unlock themselves was made in consultation with other activists present there and did not involve any dialogue with the police. People chose to unlock themselves and march back in solidarity at the request of coalfields residents who felt that the action had been a success since Massey\'s business had been disrupted for the day and the great majority of the employees had already left the building. Those locked down and a great many supporters were prepared to stay in the street and the threat of arrest was not a deterrent. I found it to be an incredibly empowering experience to work with those locked down and everyone else who liberated the street in front of Massey Coal for those few hours. Everyone maintained high spirits out on those hot streets, stared down the riot squads who formed without blinking and ignored demands by police that we leave before we felt our purpose had been accomplished. Whatever anyone may think about the tactical choice to leave, let the record be set straight that police negotiations were no part of the decision to leave.\"

In response to our summary about the day\'s events, Jason Guard writes:

\"I don\'t know if this bit about a meeting with Gov. Warner is accurate. However, earlier in the week the Gov. of West Virginia, Joe Manchin, had some of his assistants meet with Coal River Mountain Watch members in response to Ed Wiley\'s hunger strike on the state\'s capitol steps. Ed\'s grand-daughter attends Marsh Fork elementary which is overshaddowed by a poisonous coal treatment plant/reservoir. Some say that the Governor was only attempting to pacify the protestors and take the momentum out of their campaign against Massey Energy. Several WVA coal field residents elected not to attend the rally in Richmond due to the hints of slight reforms communicated by the WVA Gov\'s office. Meanwhile, the Dept of Environmental Protection approved the building of another coal silo next to Marsh Fork elementary.\"
http://richmond.indymedia.org/newswire/dis...
Add Your Comments
LATEST COMMENTS ABOUT THIS ARTICLE
Listed below are the latest comments about this post.
These comments are submitted anonymously by website visitors.