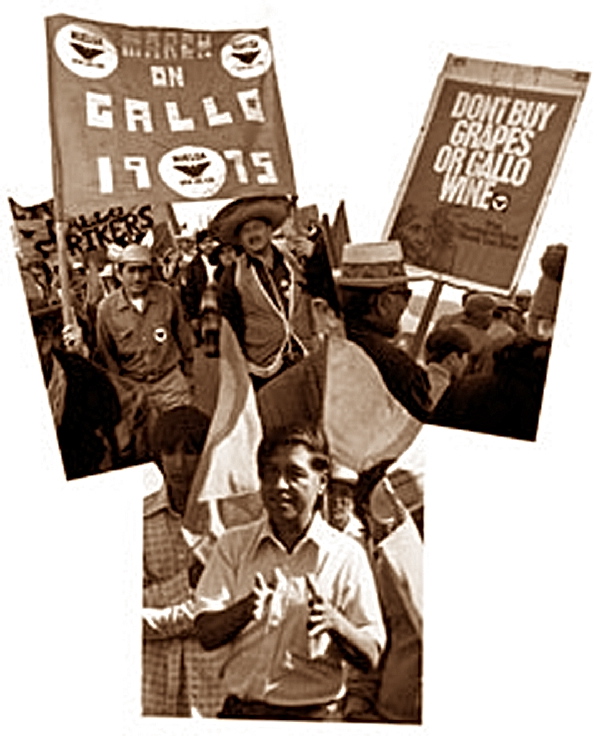 The United Farm Workers invites people of good will to join our second boycott of Gallo wine in 32 years.

Together we will convince America’s wealthiest wine making family to stop exploiting and mistreating all of its vineyard workers in Sonoma County.

When Gallo farm workers in Sonoma County voted overwhelmingly for the UFW in 1994, all of them were full-time workers with benefits. Today, 75 percent of them are temporary employees with no benefits whatsoever.

All of the Gallos’ Sonoma County farm workers endure chronically low pay. Yet the Gallos are offering a zero wage increase.

The Gallos deny the overwhelming majority of their workers health coverage, paid holidays and vacations, job security, and grievance rights.

The Gallos abuse, cheat, and deny these workers benefits, job protections, and humane living conditions in the heart of California’s fabled wine country.

We invite you to see the April 14 news story aired by the Bay Area’s Fox television affiliate, Channel 2, and articles in the Santa Rosa Press Democrat.

It exposed squalid living conditions suffered by 29 workers who labor in the Gallos’ Sonoma County vineyards. Twenty-nine men were jammed into a small three-bedroom, one-bath house in Windsor. These conditions even shocked veteran state and federal authorities conducting the raid the Channel 2 crew witnessed.

The Gallos say they have no responsibility for the miserable conditions endured by their workers.

The Gallos say they have no responsibility for the refusal to provide any benefits or job protections for 75 percent of their Sonoma County work force.

Like so many big institutions in society today, the Gallos deny responsibility for what is being done to farm workers on their behalf, on their land, to produce their product and to help make their money.

The Gallos may not have a union contract. But they have a social contract—with all the workers whose labor produces their wine and with the public whose patronage sustains their profits.

Through this new boycott, people of goodwill everywhere can have a say. They can say, "No Gallo!"

Cesar Chavez liked to say boycotts are better than elections because the polls never close and you can vote more than once.

We will let people "vote" in some new ways.

When we kicked off our boycotts during the 1960s and 1970s, including the first boycott of Gallo wine in 1973, we sent farm workers on the road to cities across the U.S. and Canada.

Today a virile campaign begins against Gallo. We are launching into cyberspace the news stories on living conditions and the invitation for people of good will to join our boycott.

We will distribute them to the expanding United Farm Workers listserv, which now reaches tens of thousands of committed farm worker activists nationwide.

We are taking our appeal to allied and sympathetic organizations such as Union Voice and Working Assets, to name a few. These and other key listservs will target minority, women’s rights, and environmental groups with millions of good people—plus every Democratic officeholder and like-minded organization.

We will send the news stories and our boycott invitation to all of these people, asking that they spread them to their friends, colleagues, and loved ones wherever they live across America and in the other 85 countries where Gallo wines are sold.

These people will become our advertisers. They will do for us what millions of dollars in TV commercials do for the Gallos.

In addition, we will use all of these contacts to distribute our posters, bumper stickers, and buttons.

There will be traditional boycott activities and events as well. We will solicit and obtain endorsements and support from a long list of individuals and groups encompassing people from every walk of life.

We will rely upon the Internet, other avenues and forums and the reputation the union of Cesar Chavez has built over four decades to reach throughout California and into thousands of distant places.

We will ask millions of people of good will to respond to an appeal for them to act constructively by convincing the Gallos to do the responsible thing.

And in the end, we will succeed.

http://www.ufw.org
Add Your Comments
LATEST COMMENTS ABOUT THIS ARTICLE
Listed below are the latest comments about this post.
These comments are submitted anonymously by website visitors.