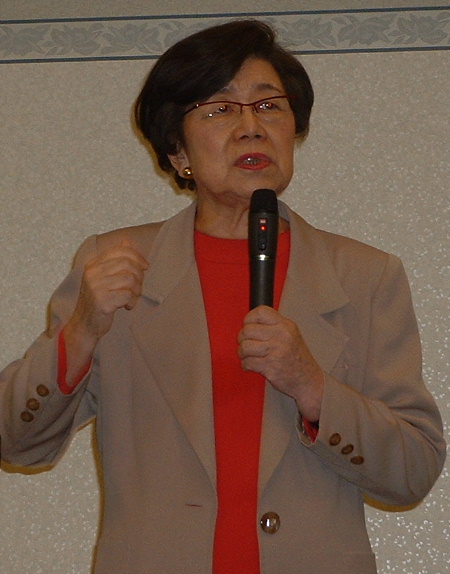 (Takako Doi, House of Representatives member in Japan, speaking on Article 9 at a public meeting in Amagasaki, Japan, 12 March 2005)

AMAGASAKI, Japan — The biggest worry 13 years ago for Takako Doi, one of Japan’s most influential politicians, was how to stop the Japanese government’s unpopular plans to dispatch Japan’s Self-Defense Forces to Cambodia as part of United Nations “peace-keeping operations.”

Japanese public sentiment in 1992 was overwhelmingly against the government’s planned dispatch of those troops, with many citizens viewing the dispatch as a violation of Article 9 of Japan’s constitution, which prohibits the nation from even having a military. Doi was determined to tap into that rising public anger on behalf of her political party, the Social Democratic Party.

“I want to stress that it is we who are thinking deepest about Japan’s important role in international contributions,” she told this writer in an interview back in June 1992. She called the Japanese government’s railroading of a bill that had just paved the way for that SDF dispatch as “abnormal” and “against the rule of democracy....Such a method of deliberation should receive no sympathy from the public.”

And, in fact, it didn’t get much public sympathy. But the SDF dispatch soon went ahead anyway, marking the first time since World War II that Japanese military forces had walked on foreign soil.

All those problems seem quite small in comparison to the battles Doi and Japan’s socialist party face today: among them, the Japanese government’s determination to change Article 9 itself; the ruling party’s offensive against women’s rights in Japan; the stationing of several hundred Japanese SDF troops in Iraq and the possibility of their exposure to radiation poisoning from depleted uranium; and Japan’s strained relations with its Asian neighbors.

“Considering the direction this nation is being taken by the current government, I think it is very dangerous,” Doi said in a recent interview in the industrial city of Amagasaki, Hyogo Prefecture, part of her district as a 36-year member of the House of Representatives of Japan’s Diet, or parliament.

“Dangerous” may be putting it mildly for Doi, once the most dynamic leader of her party. Since that PKO dispatch 13 years ago, the Social Democratic Party has been steadily losing its appeal in the Japanese public eye. Doi, whose fiery brand of politicking helped lead the SDP to major electoral victories in the 1980s, herself suffered a substantial loss of local support in national elections in 2003.

But her place in postwar Japanese history as one who has helped move the mountain known as Japanese politics is indisputable, and she vows to continue fighting the good fight, especially for Japan’s “peace constitution.”

She was in town to do just that during a speech on behalf of Article 9, the war-renouncing clause in Japan’s constitution, in which she called on citizens to raise their voices against current moves by Japanese Prime Minister Junichiro Koizumi to alter Article 9 and ostensibly smooth the way for the future overseas dispatch of Japan’s military.

So far public opinion has been generally against such moves by Koizumi and the ruling Liberal-Democratic Party, and Doi said she is comforted by the support Article 9 has continued to receive from Japanese citizens for decades. “The right to change the constitution is in the hands of the people, no matter what Mr. Koizumi thinks,” she said. “Even with the LDP, opinions are divided” over whether or not to change it.

Aspiring sincerely to an international peace based on justice and order, the Japanese people forever renounce war as a sovereign right of the nation and the threat or use of force as means of settling international disputes.

In order to accomplish the aim of the preceding paragraph, land, sea, and air forces, as well as other war potential, will never be maintained. The right of belligerency of the state will not be recognized.

Doi points out a general lack of awareness in the United States about the critical importance of Article 9 — the key provision of the constitution, which was drawn up by the Americans in the wake of Japan’s defeat in World War II — and the importance of having U.S. citizens understand and support the current grassroots moves in Japan to keep Article 9 from being changed. “In the U.S., there are many people who don’t know about Article 9. At the time of the [first Persian] Gulf War, a Japanese high school student sent a letter to columnist Bob Greene about Article 9, and the letter was run in the papers and there was a great reaction,” Doi recalls. “So I think I myself have to make many more opportunities to inform [the world] about Article 9.”

Doi praises the effort of one American, Dr. Charles Overby, a former engineering professor at Ohio University and a war veteran, who has founded an organization called The Article 9 Society to protect what he calls the “73 honorable words for world peace” that make up Article 9. Doi said she still remembers how impressed the audience was to hear a speech Overby gave at The Hague in the Netherlands in 1999 in favor of keeping Japan’s Article 9 as it stands.

But for all the justifiable concern over Article 9, Doi says there is another clause in the Japanese constitution — Article 24, which guarantees women’s rights in Japan — that is in just as much danger now of being weakened by the ruling LDP.

Article 24 of Japan’s constitution reads in its entirety:

Marriage shall be based only on the mutual consent of both sexes and it shall be maintained through mutual cooperation with the equal rights of husband and wife as a basis.

With regard to choice of spouse, property rights, inheritance, choice of domicile, divorce and other matters pertaining to marriage and the family, laws shall be enacted from the standpoint of individual dignity and the essential equality of the sexes.

Article 24 was inserted into the Japanese constitution in 1946 at the insistence of Beate Sirota Gordon, an American civilian (then age 22) who served on the staff of General Douglas MacArthur during the U.S. postwar occupation of Japan. Gordon has said she was appalled at how few rights Japanese women had in society at that time and had wanted to make sure postwar Japan guaranteed those basic rights for Japanese women.

The Koizumi administration, Doi says, is intent on amending Article 24 to reflect the LDP’s basic stance of “men in the workplace, women at home.” Amidst a dropping birth rate in Japan — and apparently taking its cue from the conservative platform of “family values” in the U.S. — a constitutional panel of the LDP in June 2004 slammed Article 24 as promoting "egoism in postwar Japan, leading to the collapse of family and community." The women’s rights article in the constitution, the LDP maintains, should be amended to place more emphasis on the family in modern times.

There are concerns in Japan now that women’s basic rights could be weakened if such changes were made. “Article 24 is about the dignity of individual people and the equality of the sexes,” Doi said, rejecting what she called the LDP’s male-dominated view of the constitutional article as a domestic obstacle to the Japanese family.

For both young women and men these days in Japan, Self-Defense Forces advertisements increasingly portray the military as an attractive alternative in a tightening job market. But Doi insists most Japanese women are not interested in the job of soldier. “Iraq is not a place women want to go,” she said. “Women are working very hard in NGOs at an international level in the areas of medical or educational activities in times of disaster, or in medical care for children in war zones. I think expectations [among women] are to work as part of such humane NGO activities, not in the military.”

Humanitarian aid aside, several hundred Japanese military troops today remain based in Samawah — an area of Iraq where one former U.S. military scientist, Dr. Asaf Durakovic, claims to have found high levels of contamination of depleted uranium from Allied weapons that were used during the March 2003 invasion of Iraq.

Durakovic spoke about his DU findings recently at Doi’s alma mater, the prestigious Doshisha University in Kyoto, where Doi had studied and earned her master’s degree in constitutional law in the 1950s. Durakovic’s recent findings of high levels of DU in the bodies of U.S. military personnel who returned from Samawah have contributed to increasing calls from some representatives in the U.S. Congress for DU testing of all U.S. soldiers returning from Iraq. While in Kyoto, Durakovic told this writer he would be willing to test Japanese soldiers coming back from Iraq as well — if Japanese political leaders were open to the idea.

But Doi says the onus is on the United States to come clean first about the deadly uses and effects of radiation from depleted uranium as a modern-day weapon of war. “It seems that everywhere in Iraq has suffered damage [from DU], not just Samawah,” she said. “It seems the U.S. military has used a lot of DU [weapons] there. But if the U.S. government doesn’t tell the truth, we cannot sufficiently treat injuries due to DU. So we should demand that the U.S. government tell the truth.”

Although coverage of depleted uranium does occasionally appear in Japan’s news media, Japanese political parties of all ideologies have so far avoided confronting the issue of depleted uranium head-on. But in an industrialized nation like Japan, with its sensitivity toward history as a victim of U.S. atomic warfare, such a confrontation may be hard to avoid in the future.

While Doi considers herself a friend of the United States, she maintains that Japan’s relationship with the U.S. needs to be a more independent one: “Japan should not just follow what America thinks; it should have its own views,” she said back in 1992.

With all that has taken place over the last 13 years, she appears more convinced of that than ever. At a time when Japan’s relations with China and the Koreas remain tense, she believes mending fences with Asian neighbors must be a top priority for Japan if it is to be judged well by history: “We should not forget that we are part of history, here and now,” said Doi. “Japan is a part of Asia and cannot leave Asia...We cannot make better relations with other neighboring Asian countries without remembering the past as a guide for the future. I really do think so.”

Brian Covert is an independent journalist based in Hyogo, Japan. Hidetaka Saito of Kobe, Japan served as interpreter for this story.


http://www.japan-zone.com/modern/doi_takak...
Add Your Comments
Support Independent Media
We are 100% volunteer and depend on your participation to sustain our efforts!