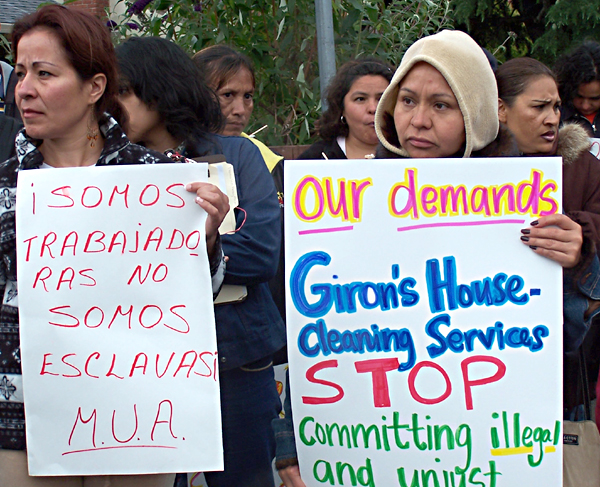 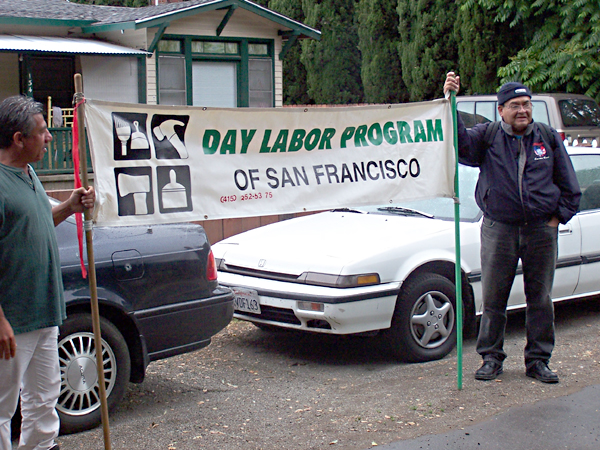 MENLO PARK, CA -- Several groups including the Worker Run Legal Clinic for Domestic Workers and Day Laborers and the Coalition for Domestic Worker Rights, joined to support Dominga Lugo's demand that her former employer, Maria Giron of Giron's Housecleaning Services, immediately stop committing illegal and unjust acts against her employees. Dominga Lugo together with dozens of supportive domestic workers and day laborers held a press conference and passed out know-your-rights information to Giron's current employees at the business place in Menlo Park June 8, 2005, at 7:00 a.m. to inform the employees about their rights and the public about this abusive employer.

Dominga's attorney, Hillary Ronen explains, "Giron subjected Dominga to widescale abuse including failing to pay her for hours worked or overtime, stealing her Christmas tips, and forcing her to clean clients' homes on her knees and using pure bleach without protective gear such as knee pads, gloves, or a mask."

While Dominga Lugo continues to fight for her unpaid wages and penalties for failure to receive meal or breaks on the job, she also wants to protect her former co-workers. Dominga explains, "I suffered severe abuse for the past ten years. I am so happy I no longer work for Maria Giron but I worry about my former co-workers that continue to suffer the same abuse."

Inez Lazarte, domestic worker and legal defender in the Day Labor Program's worker run legal clinic explains why the clinic decided to go public about this case, "It is so important that we publicly denounce the abuse that Maria Giron is inflicting upon her employees because such abuse is not uncommon. Many domestic workers have told us that they don't leave abusive employers because all employers are abusive. Through our public denouncement of Maria Giron, we send a message to all abusive employers that domestic workers are not alone. We will fight against all such abuse."

Housecleaner sues for back wages

Representatives from a handful of labor rights groups gathered outside Giron's home at 7 a.m. chanting, "Pay what you owe" in Spanish. The group came to support former Giron employee Dominga Lugo, who has filed a complaint with the California Labor Commission seeking more than $10,000 in back wages and damages.

During the 10 years Lugo worked for Giron, she said she was made to work with pure bleach without protection, paid for eight hours when she worked 12 and transported from house to house in unsafe vehicles.

When Lugo complained to her boss about the conditions, "She'd say, 'I've got a lot of people who want to work. If you don't want to work, quit,'" Lugo said Tuesday.

It's a scenario that's all too common for immigrant workers, said Hillary Ronen, an attorney from the San Francisco-based La Raza Centro Legal, which is representing Lugo. The group has represented day laborers for years and recently took up the cause of domestic workers.

"Abuse of domestic workers is going on in the Bay Area," Ronen said.

But according to Maria Giron, it's not happening in her shop.

Giron said she was shocked to find the group of protesters in front of her house and claims she treats all her workers fairly.

"I don't force them to work. I never ask them to work with bleach," Giron said. "I started this business by myself 25 years ago, and this is the first problem I've ever had with anybody."

Karen Yu, an environmental health inspector with the city of San Francisco, attended the rally to provide information about domestic workers' legal rights. She said domestic workers have a long history of being mistreated in the eyes of California labor laws.

"Homeowners may hire domestic workers and they might not know about these laws," Yu said. "But a company such as this; they're a business. They should know the health and safety and wage laws."

http://www.indybay.org/news/2005/02/172330...
Add Your Comments
LATEST COMMENTS ABOUT THIS ARTICLE
Listed below are the latest comments about this post.
These comments are submitted anonymously by website visitors.