Newswire
Calendar
Features
Home
Donate
From the Open-Publishing Calendar
From the Open-Publishing Newswire
Indybay Feature
Publish to Newswire
Add an Event
Related Categories: South Bay | Arts + Action
Anarchist Action Palo Alto: March Against War, Empire and Capitalism
by ~Bradley (bradley [at] riseup.net)
Monday Jun 27th, 2005 1:50 AM
On the evening of June 25, several hundred people took to the streets of downtown Palo Alto to march against war, empire and capitalism.
Copy the code below to embed this movie into a web page:
Download Video (42.5MB) | Embed Video
Video is 15:31 minutes

For more information about some of the motivations for the march, please see:

A Communique From the Organizers
http://www.anarchistaction.org/paloalto/communique.html

Anarchist Action
http://www.anarchistaction.org
§Quicker Download, Lower Resolution
by ~Bradley (bradley [at] riseup.net) Monday Jun 27th, 2005 2:03 AM
Copy the code below to embed this movie into a web page:
Download Video (20.2MB) | Embed Video
...other agencies that have dealt with the group report that "this group is very sophisticated, well organized and employs various tactics." 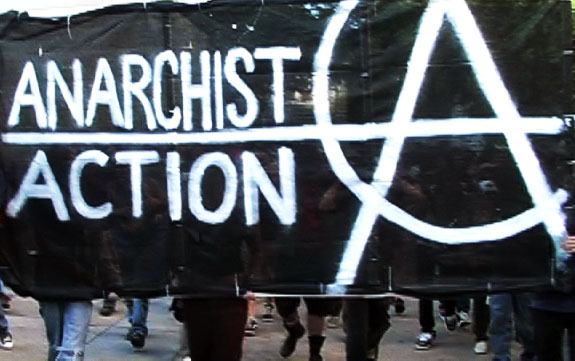