by Kelah Bott
About 100 activists gathered today, June 22, at the Federal Building in San Francisco to protest the Federal Grand Jury that has been convened to investigate the animal rights movement. 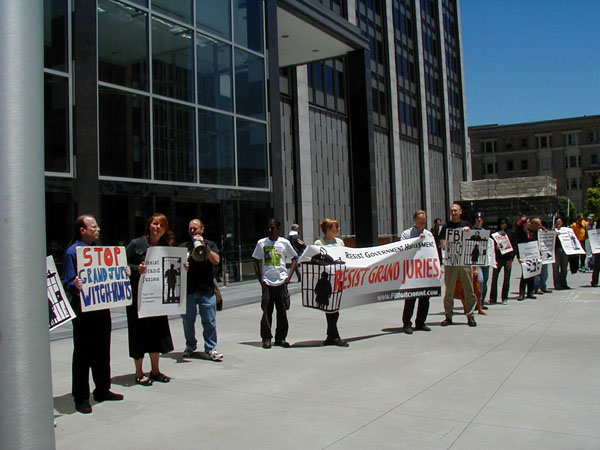 About 100 activists gathered today, June 22, at the Federal Building in San Francisco to protest the Federal Grand Jury that has been convened to investigate the animal rights movement.

Four people were scheduled to appear before the Grand Jury. All four had stated in advance that they would not cooperate with this proceeding. Nadia Winstead, one of the
subpoenaed individuals, read a statement (see her statement below) to the crowd gathered there stating her intentions and her objections to the Federal Grand Jury system as a whole.

Many activists (and non-activist citizens) are opposed to the Grand Jury system as a violation of one’s constitutional rights. Once in the Grand Jury room, those forced to testify have no right to an attorney. The power of the prosecutor goes unchecked and there is no limit to the scope of the questions they may ask. The Grand Jury is used a tool of the prosecution to gather information on social justice movements and to drive divisions between activists.

Many prosecutors are aware that activists often choose to remain silent, and thus use this as an excuse to jail those in the movements they are seeking to destroy. The use of the Grand Jury as a tool of intimidation and harassment is not new. These tactics were used in the '60s and '70s against social justice movements, in the early part of last century against the labor movement, and during the Civil War against abolitionists.

Today, however, was a minor victory for the individuals subpoenaed to this Grand Jury. Of the four scheduled to appear, three had their dates continued in order for the court to hear arguments on a motion to quash the subpoenas. The remaining person appeared before the Grand Jury, pled the fifth (her right to remain silent) and was excused. She will not have to reappear unless she is re-subpoenaed.

Six other individuals still have dates to appear in July. At this time, they are scheduled for July 13 and 20. Due to the nature of legal proceedings, these are subject to change at any time.

There are other Grand Juries convened that people should be aware of. One is in San Diego, where at least 9 people have been subpoenaed to testify in relation to environmental activism in the area (for information on today's proceedings in San Diego visit http://sandiego.indymedia.org/en/2005/06/109409.shtml). The other is here in San Francisco, related to an attack on the Ingleside police station in the ‘70s in which a police officer was killed. Several black liberation activists have been subpoenaed as the prosecutor in that case attempts to gather information on the activities of individuals from
30 years ago.

My name is Nadia Winstead, I was served with a subpoena on May 24th 2005 by federal agents to appear before a grand jury in San Francisco.

I refuse to participate in these grand jury proceedings. They represent a violation of my constitutional rights and are nothing more than government sponsored harassment.

Throughout history the US government has targeted movements that challenge the status quo. This grand jury is yet another example of the government applying pressure on activists who dare to use their first amendment rights.

During the abolitionist period, anti-slavery activists were called before grand juries in efforts to intimidate and destroy their movement.

Time and time again grand juries have been used as a tool to silence the voices of change.

Today animal advocates, prisoner support activists and members of the greater progressive community are the targets. People who promote compassion and challenge industries that profit from both human oppression and animal slavery are being subject to the wrath of the State. We are being targeted because our views, and our willingness to express them, pose a threat to corporate profiteers.

The federal government is willing to use every trick in the book to silence our dissent, but we will not be silenced.

I refuse to participate in their modern day witch hunt. I will not cooperate with this grand jury or any other in the future.


END_OF_DOCUMENT_TOKEN_TO_BE_REPLACED
Add Your Comments
Support Independent Media
We are 100% volunteer and depend on your participation to sustain our efforts!