Add an Event
Newswire
Calendar
Features
Home
Donate
From the Open-Publishing Calendar
From the Open-Publishing Newswire
Indybay Feature
Publish to Newswire
Add an Event
Related Categories: Iraq | International | Womyn
For Iraqi Women, a Facing Down of 'Two Forces' of Violence
by Brian Covert / Independent Journalist
Wednesday Jun 22nd, 2005 12:37 AM
Iraqi women's rights activist Layla Mohammed, on working for change in Iraq amidst the violence of the U.S. occupation and Muslim fundamentalism 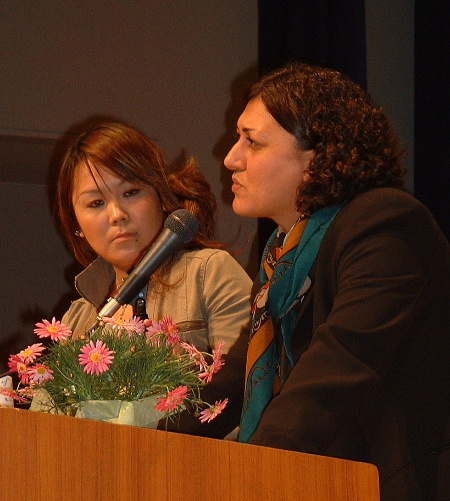 (Iraqi activist Layla Mohammed, right, joined by an interpreter, as she speaks about the situation of women in Iraq during a public meeting in Toyonaka, Osaka, Japan, on 10 March 2005.)

For Iraqi Women, a Facing Down of 'Two Forces' of Violence

OSAKA, Japan — During the brutal regime of Saddam Hussein and his Ba’ath Party, it was the legalization of “honor killing” of females to save the honor of males; the imprisoning, torturing and executing of women’s rights advocates; and the public beheading of female sex workers for allegedly bringing shame on society.

Following the U.S. invasion of Iraq in March 2003, it was the skyrocketing rates of homelessness, rape, pornography, prostitution and abortion among women in Iraqi society.

Now, it is the official indifference at best to women’s rights by pro-U.S. Iraqi government authorities on the one hand, and the constant threats and intimidation — including kidnapping and killing — of women throughout Iraq by the fundamentalist Muslim forces now battling the U.S.-led occupation forces.

No matter which you look at it, says Iraqi women’s rights activist Layla Mohammed, America’s involvement with Iraq has never translated into the freedom and equality that so many women in that country seek. In fact, she says, the record has been quite the opposite.

“This occupation gave just a golden opportunity to the political Islam [forces] to use women as a tool again — to just threaten women everywhere,” Mohammed, vice chairperson of the Baghdad-based Organization of Women’s Freedom in Iraq, said during a recent interview here. “The situation of women has changed for the worse, not for the best.”

Mohammed was on a speaking tour of Japan to appeal the plight of Iraqi women and seek support for her organization’s activities back home.

The OWFI was founded in June 2003 to physically and politically defend women in the increasingly violent and unstable society that Iraq has become. In addition to operating women’s shelters, the group organizes direct action efforts such as strikes and street demonstrations, arranges seminars to raise public awareness of current issues, and petitions the Iraqi authorities on behalf of homeless families and others who are increasingly caught between the two main violent sides: the fundamentalist “political Islam” forces and the U.S.-led occupation forces.

The OWFI is one of several grassroots organizations that make up a loose network of organizations in Iraq called the “civil resistance movement.” This nonviolent movement In Iraq, she says, condemns both the U.S. occupation and the suicide bombings by the Islamic resistance because the violence of both results in the loss of innocent Iraqi lives.

“We are fighting [U.S.] imperialism,” she said, “not to kill innocent people. We can’t justify killing [even] one child because we are against imperialism. ...We believe the protests, demonstrations and strikes by the people will end the occupation and make political Islamic groups retreat,” she said. Had the U.S. withdrawn its support for the past United Nations economic sanctions against Iraq, she believes, “in no time” the Iraqi people would have risen up and “overthrown” Saddam Hussein, a key U.S. ally in the Middle East for decades.

She is also to quick to remind people that it was the United States that “supported political Islam and created political Islam [in pitting Afghanistan] against the Soviet Union, under the name of fighting communism.” Now, she says, U.S. past support for both Saddam Hussein and the Muslim fundamentalists has come home to roost in Iraqi society in the form of daily violence against women.

The civil resistance movement, on the other hand, considers the Iraqi people themselves to be a “third force” that can stand up against the oppressive forces of both political Islam and the U.S.-led occupation. This “third force,” she says, is one that “defends human rights, women’s rights, children’s rights, and asks for a secular government [in Iraq] with separation between state and religion — where religion becomes a personal thing and no one forces anyone to believe what he or she believes. That’s the important thing.”

Mohammed herself is separated from her husband and 12-year-old daughter, who remain behind as refugees in Australia; the family had been living there since 1998. Mohammed said the desperate situation in Iraq led her to decide to go back home and join the civil resistance movement, and that her family understands and supports her work on behalf of the Iraqi people.

Death threats and the possibility of assassination at any moment are a routine part of such social work in Iraq these days. Mohammed remembers getting serious threats from some Muslim fundamentalist types who were intimidating people in one of Iraq’s many homeless camps. The residents of the camp were brave enough in that case to stand up in her defense, she said. She understands the daily risks of helping the helpless in Iraq, yet says she is determined not to quit in the face of violence.

At the moment, an estimated several hundred Japanese military troops, called Self-Defense Forces, are also based in Samawah, Iraq on what the government of Japan calls a mission to help reconstruct Iraqi society. Mohammed dismisses says that notion, saying that many Iraqi people view the Japanese SDF troops as shoring up the U.S.-led occupation and would like them to leave Iraq immediately: “Whether they [SDF] are doing something good or something bad, it’s [still as] occupation troops....They must go back home” to Japan.

Foreign troops in Iraq, especially those from the U.S., she said, do nothing but attract more suicide bombers willing to die for the cause, endangering the lives of innocent Iraqi people: “The people now realize that wherever there is occupation and foreign troops, political Islam will get revenge on them. That’s why they believe these troops should go out....It’s for [the citizens’] own benefit. They can’t do anything.”

Mohammed says she knows the kind of democratic, peaceful society she envisions for Iraq will be a long time in coming, but that it is a goal worth working toward. She said people overseas can help through moral and financial support for her organization and others like it in Iraq’s civil resistance movement, as well as by pressuring their own governments to stand up for the rights of common Iraqi citizens — especially children and women.

“The people worldwide should know there is another alternative for the people of Iraq,” she says.

Brian Covert is an independent journalist based in Hyogo, Japan. 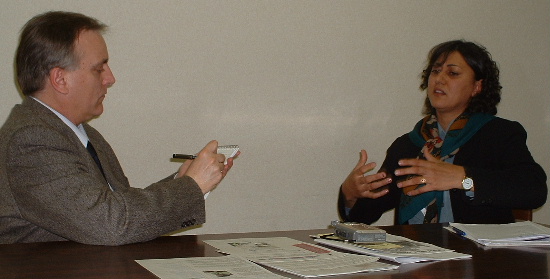 Layla Mohammed (right), being interviewed by the author in Osaka, Japan
http://www.equalityiniraq.com/english.htm
Add Your Comments
Support Independent Media
We are 100% volunteer and depend on your participation to sustain our efforts!