by Inessa Armand
An Oakland school teacher talks about the effects of No Child Left Behind. 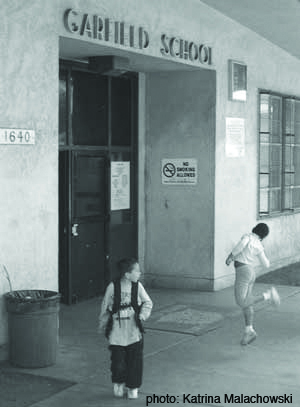 I've taught in Oakland Public Schools for several years, and in that time, I've seen the school district endorse and pursue policies designed to gut public education of any real value or liberatory use to students. It's not just a question of the district caving to the national bipartisan pressures for education deform embodied in the most recent version of No Child Left Behind (NCLB). The Oakland Unified School District (OUSD), under its various superintendents, and abetted by its variously elected and appointed school board, has been pillaging the public schools for years.

Teachers in public schools look at what is happening around us and conclude that public education as an institution may soon cease to exist. Some kids will still be educated well, if they can pay for a private school. Those who can't will attend a hollowed out shell of a school, with exhausted and severely depleted missionary teachers.

My life as an Oakland Teacher

When I started, thrown into the deep end of the pool with nothing but an emergency credential, Oakland schools were in what seemed to be their perennial chaos. Classes had no teachers and were taught for the whole year by a parade of substitutes; teachers quit after a week on the job; students were reading far below their own grade level; their math skills were poor, and absence rates were high. All those problems existed then, and they exist now. Every district administration has tried to address those problems, but the way they have chosen to address them is essentially by lowering costs and "streamlining."

The first blow was to streamline WHAT children would be taught. Their reading scores are low, their math skills are poor. Solution? Get rid of any “extraneous” curriculum. What's extraneous? Anything that isn't state mandated or reading, writing or arithmetic. So where Oakland middle school students once had classes in art, music, foreign languages, and maybe real esoterica like drama or band, they now had one fewer class a day, and their schedule is limited to math, science, gym, English, history, reading. They still had the same minutes in school, which translate into the OTHER major part of school funding in the US, "ADA" - Average Daily Attendance.

Federal dollars are apportioned to all schools in two ways. First, they're given as "Title I" funding to schools which have proportion of students eligible for a means-tested free lunch program. Second, federal funding is based on how many students are at school on a daily basis. In urban school districts, many things cause children to miss school: frequent moves, becoming homeless, being sick for environmental causes (e.g. asthma, etc), being kept home because of a lack of affordable childcare for younger children, and so on.

This means that a district where there is a lot of instability is penalized and receives less funding than a school in a district, which is say, suburban, where kids don't move as much, aren't sick as often, aren't needed at home, etc. These cuts also lowered salary costs because it meant art, music, French, and Spanish teachers were laid off. This first assault came before NCLB. Also before it, the state of California passed the Immediate Intervention for Underperforming Schools Program (IIUSP).

Schools with low standardized test scores were identified as IIUSP schools, and shown both a carrot and a stick. The carrot was money for the schools to get themselves back on track. This translated into about $45,000 for a consultant firm to be brought in to tell us how to improve ourselves. The stick was that if test scores didn't show improvement over a three year period then the school would face forced restructuring. This is pretty much exactly what NCLB also offers. Oakland, unsurprisingly, had dozens of IIUSP schools. Most of them tried hard to fulfill impossible criteria. The instability of site administrations and the continual cuts in funding made improvement next to unachievable, and in any case, the whole point of judging any poor or inner city school by its standardized test score results is to ensure that it fails.

In order to have the business flexibility to implement much of "No Child Left Behind" and the other cost-saving measures, Oakland Unified needs to weaken the teachers' union. Recent contracts have featured the same kind of concessions that most unionized American workers are facing - health caps, salary cuts, and speed-up. New proposals threaten the very existence of collective bargaining rights. How did we get to this point?

Like many stressed urban districts, Oakland Unified mismanaged its inadequate resources and had to ask for a state bail-out. We received Randolph Ward, formerly state administrator in Compton, for our punishment. Ward has total control over the district. But within Oakland, he reigns supreme. At his whim, policies are in, or out. Schools are opened, or closed. Administrators are fired or transferred. And the general philosophy of what public education should be changes.

A year ago, the Oakland Education Association, the teachers' union, got copies of some documents from the weekly principals' meeting - one was a primer on "Results Based Budgeting", and the other a guide on how to fire tenured teachers. Results Based Budgeting, or RBB, is a metaphor of the market. Schools, in this metaphor, are businesses. Instead of students, they have clients. Instead of education, they have product. Instead of learning, or skills, they have a "profit", translated as standardized test scores that consistently rise.

Just like in capitalism, schools that don't make a profit with the inputs they're given, that is, schools whose test scores don't rise and whose attendance doesn't get up to 96 percent or above and stay there, should be closed. They have failed to compete.

The second document circulated at that principals' meeting was a three page bulletin prepared by the OUSD legal department on "How to Fire a Tenured Teacher." Three sheets, front and back, filled with tips on what you can fire them for, how to document it, what the timelines are, and what exact vague language in the contract works best. The race was on. How much could the district undermine teachers' contractual rights so that this beautiful new machine of efficiency and cost-effectiveness would ease seamlessly into operation? The answer has been revealed over the course of this past year's negotiations for the new union contract. Ward, seizing the initiatives offered by the NCLB school choice options, has increased the tempo and is implementing the "penalty stages" in underperforming schools before it's legally required. He has proposed closing thirteen Oakland schools and transforming them into a sort of internal/external hybrid charter schools, and although the district swore up and down that teachers in these schools would retain their union rights, the truth has now come out. Teachers who want to stay at the schools they've been at, often for years, must reapply for their jobs, have no guarantee that they will get their job back, and must sign individual contracts. There is no union. Even the few schools which fought back and organized their own "small autonomous school plans" are being scrutinized and forced to participate in the involuntary transfer of key teachers. Ward is playing psychological warfare games with demoralized and angry teachers just when the contract negotiations have reached the point where a horribly concessionary contract offer has been made.

So what is there in Oakland schools? There are no electives for middle school students. There is a threat to the once-weekly electives for elementary students. There is a campaign to demoralize and force the departure of experienced, veteran teachers. There are cuts in funding to stressed schools which need more resources, rather than less, based on their failure to reach unrealistic Average Daily Attendance numbers. There are "school choice" transfer policies that say that students have the right to change from their neighborhood school - if it's "failing" - to a better school, which in Oakland often means a school in the middle-class hills areas, but there is nowhere near enough space in those schools for the students who could qualify. And there is a campaign to bust the union of some of the people who care the very most about the meaning of public education and the right of every child to an honest, liberatory, rich learning experience.

What's happening in Oakland is being replicated across the nation. If we don't want a school system which is segregated into public day care with some rudimentary instruction for the poor and private schools for the middle and upper classes, we need to begin fighting NOW. The Oakland teachers' union has been organizing demonstrations in downtown Oakland and at the School District Administration Offices - go to them.
Call the union - (510) 763-4020 - for information about a local coalition to fight Ward.
Related Categories: East Bay | Education & Student Activism | Fault Lines
Add Your Comments
Latest Comments
Listed below are the latest comments about this post.
These comments are submitted anonymously by website visitors.
TITLE
AUTHOR
DATE
Inessa, I love you, Vlad
Ulyanov
Support Independent Media
We are 100% volunteer and depend on your participation to sustain our efforts!