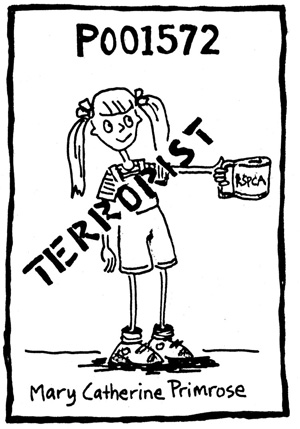 A Federal Grand Jury has convened in San Francisco and several local activists have been subpoenaed to appear. As government repression in general increases, so does the use of the Federal Grand Jury to intimidate, incarcerate and render impotent activists across social movements. In recent years, pressure on the animal rights, environmental justice, anti-war and anarchist movements has increased exponentially.

Government officials seem anxious to pin the label “terrorist” on anyone that is effectively campaigning against injustice. At a recent hearing before the Senate Committee on Environment and Public Works, John E. Lewis, Deputy Assistant Director of the Counterterrorism Division of the FBI, testified that, “Investigating and preventing animal rights extremism and eco-terrorism is one of the FBI’s highest domestic terrorism priorities.”

Local activists were alerted to this reality when fellow-activist, Harjit Gill, was charged, and subsequently pled guilty, for perjury before a grand jury in Sacramento. Though he has yet to be sentenced, it is clear that using the grand jury system to imprison people fighting for change is not above the federal government. Suppressing dissent is the desired by-product of jailing activists for challenging the status quo.

Many people are not even aware of grand juries or are unclear on their purpose. While their original intent was to check the powers of prosecutors by acting as an independent panel to protect the accused, in practice it has always functioned as a tool of the government. A grand jury is impaneled for one of two reasons: indictment or investigation. Throughout the history of the U.S., those in power have used grand juries to indict dissenters for crimes ranging from sedition to murder and bombings.

A Federal Grand Jury is made up of 16 to 23 jurors. They usually serve for 18 months, during which time they hear several cases. The prosecutor presents all the evidence and witnesses. The jurors never hear testimony from an opposing side, so the grand jury has come to be merely a rubber stamp for government attorneys asking for an indictment. During the Civil War, the grand jury was used to repress opponents of slavery.

Abolitionists were charged with inciting slaves and aiding fugitives. A few decades later, it was used to quash the burgeoning labor movement. When provocateurs bombed a protest in Chicago’s Haymarket Square, Federal prosecutors impaneled a grand jury which returned indictments against movement leaders who were not even present at the time of the bombing.

Many activists nowadays have discovered the only effective way of dealing with a grand jury is to adopt a position of non-cooperation. Testifying can often lead to more subpoenas and increased harassment. It legitimizes the process and can have unforeseen consequences for both the witness and those under investigation. Even answering seemingly harmless questions can lead to legal trouble for a fellow activist. Lindsay Parme, a long-time animal rights activist from Santa Cruz, CA was jailed for several weeks in 2003 for refusing to appear before a Federal Grand Jury. When asked why she chose this path, she said, “I simply could not bring myself to go out of my way to comply with the subpoena when the process of the Grand Jury is so unjust.”

Non-cooperation is a brave measure to take, but one that many activists see no alternative to, as the purpose of the proceedings is to seek incriminating evidence against people in their community. Parme has no regrets about her non-compliance and time in jail, “In similar circumstances I would fight it just as hard. There is no excuse for ever testifying in front of a Grand Jury. To cooperate is to be complicit in our own repression.”

Things to know about Grand Juries:

They are conducted in secret. Witnesses are allowed to talk about their experience inside the Grand Jury room, but all others are not allowed to reveal anything that goes on. If they violate this secrecy they can be charged with criminal contempt.

Who may be present while Grand Jury is in session: attorneys for the government, witness under examination, interpreters when needed and court stenographers. There is no judge present. Defense attorneys are not able to present evidence, question witnesses or even be in the grand jury room.

-Witnesses can become targets of the investigation and be prosecuted after giving testimony.
-Hearsay evidence is allowed.
-Jurors may participate in the interrogations.
-Unlike other juries, grand jurors are not screened for any bias or prejudice.

Witnesses who refuse to testify may be held in contempt and imprisoned until they comply. This can last for as long as the grand jury is in session (up to 18 months–in special circumstances the grand jury may get up to three 6-month extensions).

Resources:
Beat the Heat: How to Handle Encounters with Law Enforcement by Katya Komisaruk. A useful manual that includes a section on grand juries. Available at AK Press: www.akpress.org.
The Just Cause Law Collective has lots of information on Grand Juries and your rights on their website: www.lawcollective.org
No Compromise Magazine has articles about activists’ experiences with Federal Grand Juries, information on organizing to fight back against government repression, and historical background on grand juries.
The National Lawyers Guild www.nlg.org National: (212)679-5100 ext.12 Bay Area: (415)285-1041
Add Your Comments
LATEST COMMENTS ABOUT THIS ARTICLE
Listed below are the latest comments about this post.
These comments are submitted anonymously by website visitors.