Add an Event
Newswire
Calendar
Features
Home
Donate
From the Open-Publishing Calendar
From the Open-Publishing Newswire
Indybay Feature
Publish to Newswire
Add an Event
Related Categories: California | Anti-War
Student Statement Opposing UC-Bechtel Bid
by Will Parrish (wparrish [at] napf.org)
Thursday May 19th, 2005 3:00 PM
The Regents of the University of California have announced a partnership with the Bechtel Corporation in their bid to manage the Los Alamos National Laboratory (LANL). The students of the UC oppose this partnership and the UC’s continued involvement in the design and production of nuclear weaponry. 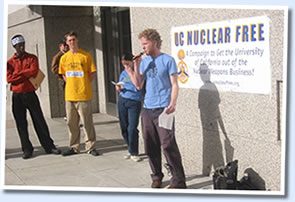 The Regents of the University of California have announced a partnership with the Bechtel Corporation in their bid to manage the Los Alamos National Laboratory (LANL). The students of the UC oppose this partnership and the UC’s continued involvement in the design and production of nuclear weaponry.

The 62-year history of UC management of LANL has been a highly contested one. Students, faculty, and staff have debated the UC’s role in the design and production of weapons of mass destruction since the signing of the first contract in 1943. Throughout the Cold War, students continually protested against the UC’s complicity in the arms race. With the demise of the Soviet Union, many assumed that the role of nuclear weapons in our nation’s security would be reduced, and the opportunity to move toward nuclear disarmament would finally be seized.

Instead, it appears that our nation is poised to begin a new arms race, one that will likely involve the design and production of new nuclear weapons, or, at the very least, the replenishment of the existing arsenal of 10,350 weapons. This approach would amount to a total lack of faith and goodwill on the part of the United States to honor its obligations outlined in the Nuclear Non-Proliferation Treaty.

LANL’s role in this process will include its traditional one: the research and design of nuclear warheads. But it will also include manufacturing. The Laboratory is currently manufacturing small batches of plutonium pits (the cores of nuclear weapons). The Department of Energy has called for a new site-wide environmental impact analysis for LANL, an initial step in preparing the Lab to produce upwards of 400 pits per year. Manufacturing is quickly becoming a central program at LANL.

Bechtel, and the two other industrial firms the UC Regents are partnering with -Washington Group International, and BWX Technologies Inc. - will make mass production in Los Alamos more than a reality, they will make it highly efficient. All three corporations have extensive contracts managing the largest production, weapons testing, and waste disposal sites in the U.S. nuclear weapons complex. Under this partnership the only role in nuclear war planning not fulfilled by UC will be the actual deployment and use of weapons.

It is for these reasons that we oppose the UC Regents’ planned partnership to manage the Los Alamos National Laboratory. We call on the Regents to recognize that the further proliferation of weapons of mass destruction is not the proper role of a university.

Blindly doing the bidding of those who would have us resume the nuclear arms race is unacceptable. Binding the university to industrial corporations whose profit and power rely upon the further militarization and nuclearization of our planet is unacceptable. The only responsible and acceptable bid to manage LANL must necessarily include a radical programmatic shift toward disarmament and environmental restoration.

http://www.ucnuclearfree.org
Add Your Comments
LATEST COMMENTS ABOUT THIS ARTICLE
Listed below are the latest comments about this post.
These comments are submitted anonymously by website visitors.