&quot;Zizek!&quot; Sneak Previews at the Roxie

by happyFT
Zizek told the audience why he was a philosopher. He does not want to explain and account for the unaccountable, and instead wants to "render strange something we accept as given." Seeing things in a new way to "help us get a small shift of perspective to see the unexpected, implicit consequences" of thought and actions. "We do not know where we truly are," he stated, adding "we do not know what is really going on. We are in a radical crisis," he concluded. 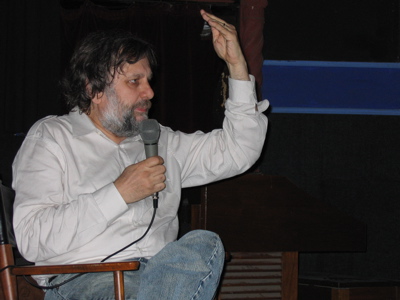 When the documentary "Zizek!" rolled onto the screen, an unkempt man stood in a generic, almost suburban setting, and described a bleak picture for humanity and our so-called love for one another. Slovenian philosopher Slavoj Zizek, the man standing on the manicured lawn, stayed in the lobby of San Francisco's Roxy Theater until this scene ran. He admitted, in a talk after the viewing, that watching that scene dropped him into a "suicidal depression," and that the whole documentary was like having your eye taken out of its socket so that you could watch yourself.

Not knowing much about Zizek's critical theory beyond what a friend and fan had described to me, I found the man on screen to be a compelling thinker and eccentric genius. Mixing his love for film, modern culture, Lacan, Marx, and Hegel into extremely focused thoughts and ideas left my exhausted brain wanting more. Throughout the documentary, clips of Zizek's interview with a too-happy, air-headed TV feature journalist run to the amusement of the Roxie's audience. One of the documentaries last scenes shows the journalist bouncing in his seat, exclaiming "I never though I'd have so much fun talking about this!" Leaving the theater, I had to agree that watching Zizek's life, and listening to his thoughts, was a deep, humorous, perplexing, and highly entertaining experience.

Producer Astra Taylor gave me a brief introduction about the project. Funded via The Documentary Campaign and the Canadian Conference of the Arts (CCA), Taylor and editor Laura Hanna's film crew spent one and a half years on the documentar, finishing the project the night before the Roxie's April 21 sneak preview. They flew the documentary to San Francisco to show it while Zizek visited the area and plan on a Fall premiere on the festival circuit.

Between shots of his readings to packed houses in Buenos Aires and New York City, the viewer is allowed to watch Zizek analyze his son's playing, speak about how his Stalin poster scares some people away, and stand horrified as a fan tracks him down for an autograph. At one point he shows the camera crew his kitchen, and all the clothes that he as apparently staged in the drawers and cabinets. Another scene shows him standing in awe of a stairwell featured in Hitchcock's "Vertigo," and then feigning a death by suicide at the bottom of the long drop. The audience consistently laughs at his quips, asides, and frenetic reactions to the various subjects that race through his mind. The Chronicle of Higher Education calls him "the Elvis of cultural theory" but my take is that he is "the Groucho Marx of cultural theory."

Aside from the man himself, and the odd portrayal of his life on screen, Zizek's nonstop monologues takes the whole documentary to a much deeper and thought-provoking level. Many categories are touched, but parts of the film are broken into segments such as ideology, philosophy, and psychoanalysis. He speaks about Lacan as we watch an extremely sterile French TV video of his hero, and he mixes Stalin and Marxism into many of his dialogs. To do justice to the content of this deep thinking, I think I would have to watch the documentary a few more times to reliably discuss the many details of his thoughts.

Like the TV journalist, I had a great time watching an entertaining documentary about one of the 21st century's foremost thinkers. My friend feared that the documentary would be dry and stuffy like a recent film he watched about Derrida, and he was glad to get to laugh at Zizek's oddities. And to have the light atmosphere with the heavy philosophical subject matter created a great balance for the laypersons who think deep but do not dive into books on thought.

After the viewing, Slavoj Zizek sat in front of the audience and spoke about the documentary and explained "what he was trying to do" as a philosopher. Analyzing the documentary, Zizek decided to "mock private details" about himself to show how they were irrelevant. "Read my books to understand me as a person," he said, noting later that "Opera's Second Death" was a "book from my heart." He also criticized his own story by stating that he was not a recluse and in fact works closely with "six or seven collaborators" as a "collective philosopher." He also said that he doesn't raise his son in a vacuum, and joked that his son was "a good Stalinist."

While reviewing notes, Zizek told the audience why he was a philosopher. He does not want to explain and account for the unaccountable, and instead wants to "render strange something we accept as given." Seeing things in a new way to "help us get a small shift of perspective to see the unexpected, implicit consequences" of thought and actions. "We do not know where we truly are," he stated, adding "we do not know what is really going on. We are in a radical crisis," he concluded.

Hinting upon subjects that currently interest him, Zizek mentioned our extended use of computers as a means of redefining what what it means to be human. He also noted his interest in how the historical foundation of the radical right stems from the radical left in the United States. "John Brown was a crucial figure to radical history.... Kansas embodies the tragedies of American radical politics."

As a tepid Q&A session ended, Slavoj Zizek awkwardly walked up the aisle to go to a table and sign autographs for people. As I stood there watching him meet and greet, no one attempted to engage him in a discussion beyond a "thank you." Wondering what I could possibly ask a man who's IQ was twice mine, I stood there speechless as well. Before his low-key exit, I did get to answer a question of his, in my mind at least. Zizek was wondering where Modern Times bookstore was, and everyone in the lobby could answer that question. As he walked out the door, I had to agree with him on his main point of the night. As a philosopher, Zizek gave me a taste of that "small shift" in my thinking.
Add Your Comments
Latest Comments
Listed below are the latest comments about this post.
These comments are submitted anonymously by website visitors.
TITLE
AUTHOR
DATE
NSK
cp
dean!
cp
some recent essays from Zizek
Matt Fitt
not a strick freudian
sasha
Zizek Doesn't Offer Easy Answers
Matt Fitt
Zizec the strict fraudian
professor-rat
Support Independent Media
We are 100% volunteer and depend on your participation to sustain our efforts!