Add an Event
Newswire
Calendar
Features
Home
Donate
From the Open-Publishing Calendar
From the Open-Publishing Newswire
Indybay Feature
Publish to Newswire
Add an Event
Related Categories: East Bay | Anti-War
Demo against marine recruiting at UCB-4/21
by cp
Thursday Apr 21st, 2005 5:17 PM
A variety of groups participated in a demonstration against a recruitment table by the Marines at the UC Berkeley Career Fair. The fair didn't have any tables by other controversial recruiters such as the NSA, CIA or FBI. Leadership was provided by the Berkeley Stop the War Coalition. A loud counterprotest was set up by the Berkeley College Republicans, and perhaps 3 members of the Protest Warriors who could be identified. 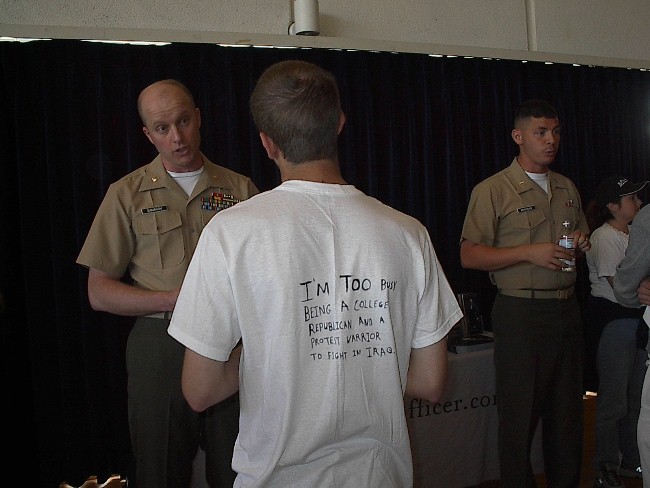 Around 11am, demonstrators had speakers against Marines recruiting including a number of Vietnam Veterans. The career fair only opened at 12noon, and the UC police department were out in high numbers and had set up barricades around the building, and even were seen searching the building beforehand with a bomb sniffing dog.
The counterprotesters had a rhythm of talking for several minutes, then breaking out in a chant lasting 45 seconds, then becoming quiet again.
Some joker who was doing a right-wing documentary was going around in a Josef Stalin shirt, and had a silent cameraman with an expensive Leica camera. It wasn't clear what the subject of the documentary was.
When the career fair opened, lots of students went in. Most went to various company booths, and about 60 went to the corner where the Marines were next to the Peace Corps, and overseas english teaching.
Students got in a line and one by one had quiet conversations with two marine recruiters. There was a lot of filming going on by police and media here. The idea was that it is actually against university rules regarding discrimination that a military organization which explicitly rejects homosexuals should be allowed to practice this discrimination on campus. A number of gay and transgender students asked to be accepted into the marines and were rejected.

The organizers had negotiated to not endlessly get back into the line to speak into the recruiters, so people started to filter out.

I stood next to a student dressed in interview attire who was complaining that this was embarrassing to have the protest, and that almost all students go to the university to get a job.
I think we can demonstrate fairly easily that the university is not a vocational institute. Just open the catalogs of courses for regular UC Berkeley, versus UC Extension, or even a local community college, and tell me which one will do a better job of preparing you for a specific job. http://www.berkeley.edu When students go to UC Berkeley, they will spend at least 1/3 of the time on general courses like foreign language, composition, background math and social sciences classes. When you walk into one of these career fairs, almost everyone with a 4 year degree will have this sinking feeling like none of their classes have specifically prepared them for careers at one of those companies because they want experience in very specific things. Many are seeking only electrical engineering, computer science, or business majors, where it can be very difficult to enter into the CS major... but even if you major in business or CS, it will be very difficult to have the concrete skills in a project area relevant to a company. You will only have done class projects for your business degree and have less real experience than a drywall contractor with several employees who meets payroll, taxes, and handles customers, and maybe you learned data structures and java programming for CS, but here is a company that wants you to have experience in some specific platform. If you majored in biology or math much less english, you can feel really unqualified because a biotech company will need somebody with experience in some thing that never would come up in a MCB lab, or maybe you just read about it and did it once. In other words, it is impossible to learn the specific vocational skills relevant to a company in your 4 year degree. You almost always will be starting near the bottom in your first job. However, if you just took certificate classes, you wouldn't have the general math and writing skills necessary to be adaptable in the future when your vocational skills outdate. So really, the best approach is to try to pick up as many skills as possible while at the same time getting an *education* which involves learning about history and politics and science and lots of things, and not feeling that you have to abandon your ethics in order to earn an income.
§protesters, 4 supporters
by cp Thursday Apr 21st, 2005 5:17 PM 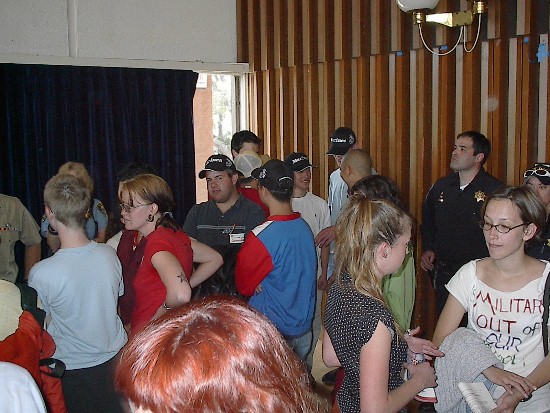 A group of kids with marine hats stood to a side. Channel 2 was there.
§Line of students, with many gay, to speak with marines
by cp Thursday Apr 21st, 2005 5:17 PM 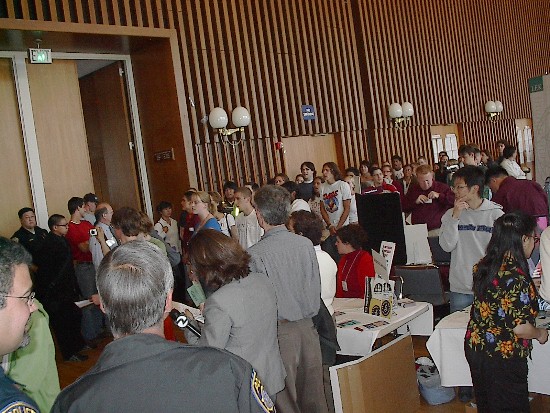 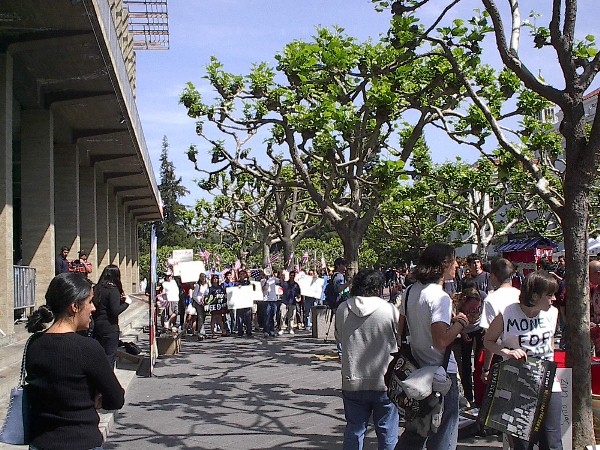 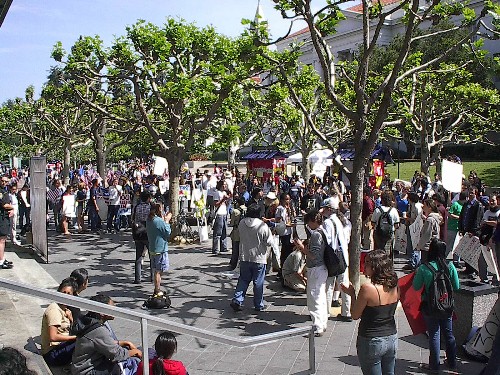 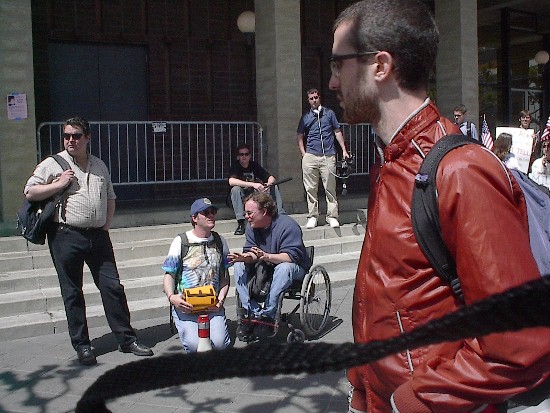 If you know who these two people are, could you comment?

We were speculating that this protest warrior guy with the tie-dye t-shirt and union hat could be Rudolf the Red, the lead protest warrior because he said he was coming, and we could only see 2-3 protest warriors unless there were more who blended in with the background. Also, we've been trying to identify the guy who does the http://www.zombietime.com site with pictures at very many Berkeley protests. His photos are funny, but we need to know who he is. In some of our photos, this guy seemed to be situated at an angle where zombie pictures were photographed from.
§documentary guy. point wasn't clear
by cp Thursday Apr 21st, 2005 5:17 PM 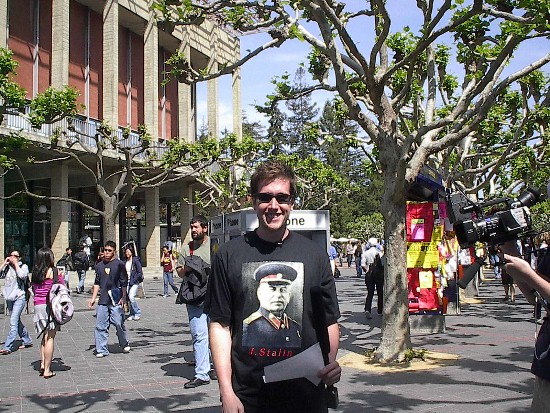