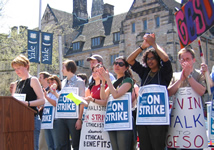 Graduate student-workers and their allies at three of the biggest universities in the Northeast are engaging in massive, spirited work actions this week.

On Monday, April 18 the Graduate Student Employees United-UAW 2110 (http://www.2110uaw.org/gseu) at Columbia University and the Graduate Employees and Students Organization-UNITE-HERE at Yale (http://www.yaleunions.org/geso) began a joint week-long strike for recognition. On April 20 at Columbia a 4 p.m. "Rally for Justice" at 116th and Broadway is scheduled.

"By asserting this as one voice, we're identifying what we have in common: that we should be recognized as legal workers and be respected and given bargaining rights," said Dehlia Hannah, a philosophy graduate student at Columbia (http://www.cnn.com).

The graduate student-workers taking part are not teaching classes, grading papers or hosting review sessions this week. Their demands include health care for family members and a legally-binding grievance process.

Graduate student-workers at public universities like the University of Massachusetts-Amherst are governed under different federal and state laws through labor boards such as the Massachusetts Labor Relations Commission.

On April 21 the Graduate Employee Organization-UAW Local 2322 at UMass-Amherst (http://www.geouaw.org) are walking out for that day in protest of the administration's bad-faith, union-busting bargaining tactics. The day will include pickets at various campus buildings, a rally and cultural events. GEO came into existence in 1993 after a ten-day strike and years of struggle for recognition. The UMass administration, bargaining for over a year with GEO, continues to propose real wage and health-care cuts, an end to health benefits for currently covered same-sex couples, and drastic increases in child-care costs.

The Take Back UMass coalition (http://www.takebackumass.com) is helping coordinate undergraduates boycotting classes in solidarity with GEO and to oppose the proposed restructuring of independent student organizations by the administration. The faculty union, the Massachusetts Society of Professionals-NEA, will be leading teach-ins outside of campus buildings for A21. Over 175 faculty signed a solidarity statement in support of students which was published as an ad in the undergraduate student newspaper The Daily Collegian.

Support is national and global for all three struggles including multiple forms of assistance from the AFL-CIO (http://www.aflcio.org), UNITE-HERE (http://www.unitehere.org), the UAW (http://www.uaw.org) and scores of unions as well as progressive campus and community organizations.

"This act isn't a rejection of our faculty, whom we greatly respect. It's a rejection of an Administration who won't prioritize STUDENTS, TEACHERS & BOOKS. By going to class, we pretend that the assault on student and employee rights isn't happening, we continue to act normally and do what's expected of us. By not going to class, we resist and say we won't fulfill UMass's expectation until they start to fulfill our expectations for a fair labor contract, for student autonomy and for support for diversity," declares a A21 GEO walkout leaflet.

Pfeifer is a Labor Studies graduate student, a GEO member at UMass Amherst and former Editor-in-Chief of The UWM Post at UW-Milwaukee.

(c) 2005 Bryan G. Pfeifer. Article may be used in full or in part provided full attribution is given to author.


http://www.geouaw.org
Add Your Comments
Support Independent Media
We are 100% volunteer and depend on your participation to sustain our efforts!