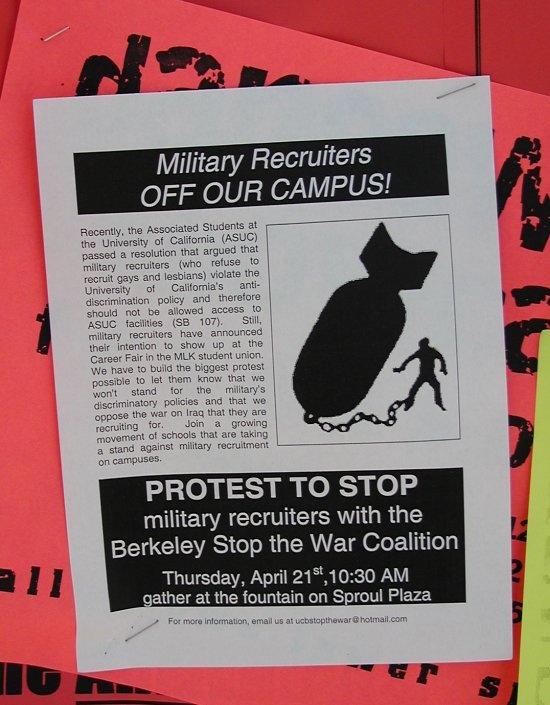 *Protest Against Military Recruiters*
WHEN: Thursday, April 21st * 10:30 am
WHERE: The Fountain on Sproul Plaza, UC Berkeley

Counter Recruitment has become a national issue, and it's working. Between these efforts and widespread anger about the war, all branches of the United States Military have seen drastic drops in their recruitment rates. In February, the Army missed its recruiting goal for the first time in nearly five years, and it missed its March goal by 32 percent. The Army Reserve is 10 percent behind their year-to-date recruiting target and the National
Guard is 26 percent short, while the need for soldiers is on the rise.
Counter Recruitment has proven to be an effective tool in actually hindering the Military's ability to carry out this immoral and unjust war, and Berkeley Stop the War Coalition has been working to bring the Counter Recruitment movement to UC Berkeley's campus.

Recently, the Associated Students at the University of California (ASUC) passed a resolution that argued that military recruiters (who refuse to recruit gays and lesbians) violate the University of California's anti-discrimination policy and therefore should not be allowed access to ASUC facilities (SB 107). Still, military recruiters have announced their intention to show up at the Career Fair in the MLK student union. We have to build the biggest protest possible to let them know that we won't stand for the military's discriminatory policies and that we oppose the war on Iraq
that they are recruiting for. Join a growing movement of schools that are taking a stand against military recruitment on campuses!

SPONSORED BY: Berkeley Stop the War Coalition, member of the Campus Anti-war Network (CAN) 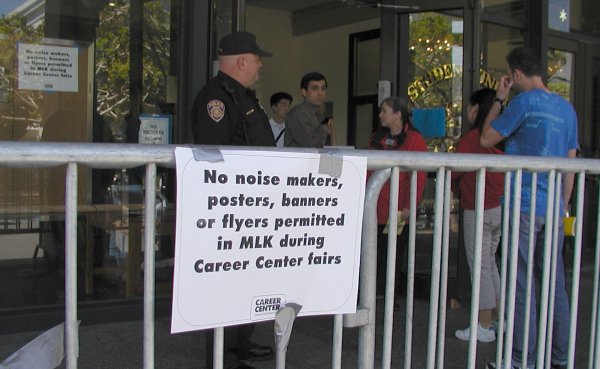 A battle is brewing on UC Berkeley's campus – a battle over student
voice and student rights – and we believe that this is an issue that
all members of the campus should be concerned about.

On April 21st, UC Berkeley has invited the Marines to take part in a
career fair at the Martin Luther King, Jr. Student Union.

Members of the Berkeley Stop the War Coalition plan on being at the
career fair to protest the presence of military recruiters, not only
because they continue to uphold a discriminatory hiring policy
against gays and lesbians ("Don't Ask, Don't Tell"), but also because
they are recruiting for an unjust and illegal military occupation of
Iraq.

If this were all there were to the situation, we suspect that many
people at UC Berkeley might even ignore this protest as a regular
occurrence by campus radicals.

But a few weeks ago, the Associated Students of the University of
California (ASUC) passed a resolution (SB 107) that prohibits the use
of Martin Luther King, Jr. Student Union (which is the property of
the ASUC) by military recruiters. Furthermore, last November the
Third Circuit Court ruled in FAIR v. Rumsfeld that universities and
colleges can legally bar military recruiters from their campuses
because they discriminate against gays and lesbians.

It is our understanding that UC Berkeley administrators intend to
ignore the ASUC resolution and that an unsympathetic ASUC executive
does not intend to enforce that resolution.

If student voice is to count for anything, the resolutions of the
student government must be taken seriously by members of the
administration and the ASUC executive.

As a consequence, we appeal to all members of the UC Berkeley
community to join us in our protest. We hope to march into the
career fair and peacefully escort the military recruiters out. We
plan to be non-violent and organized. But we suspect that the
Marines and the university will not be compliant and that the police
will protect the rights of the military and not those of the student
activists.

The only way that we can ensure that a student voice is respected is
to show up in numbers to the career fair and demand that the
University of California uphold its commitments to its students:
first, by enforcing its own anti-discrimination policies, and second,
by respecting the decision of the ASUC.

We do not deny that as anti-war activists we have an agenda aimed at
stopping the occupation of Iraq. But we also do not believe that the
war in Iraq and what happens on this campus are disconnected
phenomena.

In the 1960s, Berkeley was a beacon for student activists across the
country because it took a moral stand when others were unwilling. It
is time for that Berkeley to rise again.

Berkeley Stop the War Coalition
Add Your Comments
LATEST COMMENTS ABOUT THIS ARTICLE
Listed below are the latest comments about this post.
These comments are submitted anonymously by website visitors.