Add an Event
Newswire
Calendar
Features
Home
Donate
From the Open-Publishing Calendar
From the Open-Publishing Newswire
Indybay Feature
Publish to Newswire
Add an Event
Related Categories: Central Valley | Anti-War
Merced Rocks Against the War
by Mike Rhodes (MikeRhodes [at] Comcast.net)
Friday Apr 15th, 2005 8:23 PM
Political activists in Merced held an event at Merced College. Speakers called for an end to the war in Iraq, spoken word artists talked about unjust social conditions in this country, and the police were there - but not to defend our right to Free Speech. 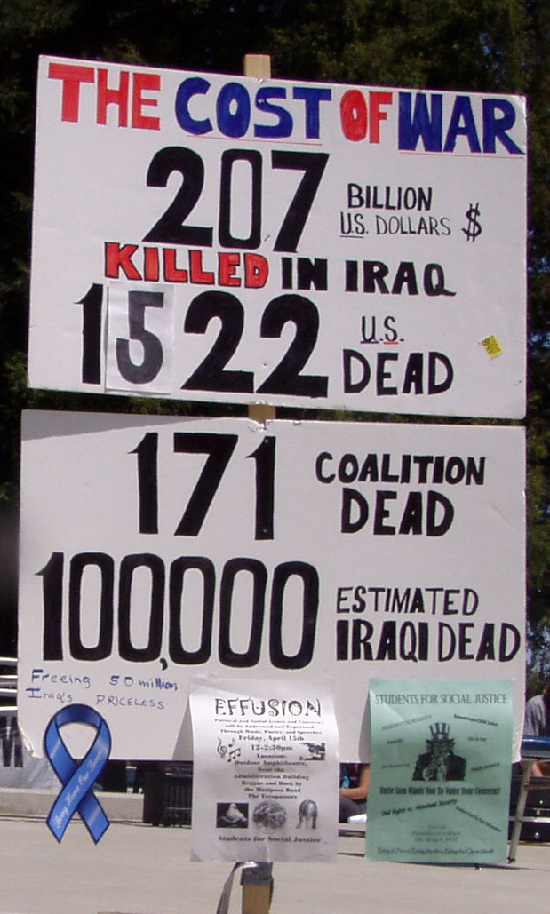 Merced Rocks Against the War
By Mike Rhodes
April 15, 2005

Students For Social Justice at Merced College held an event today featuring anti-war speakers, spoken word artists, and musicians. Students, faculty, and some community members gathered at the campus amphitheater and listened to the first speaker, Forrest Schmidt from the A.N.S.W.E.R. Coalition. Schmidt called on the audience to organize to stop the unjust and immoral war in Iraq.

People were urged to attend the Saturday, April 30 rally that will happen in San Francisco featuring speaker Ramsey Clark. The event will take place at Mission High School in San Francisco, 3750 18th Street and starts at 7 PM. April 30 is the 30th anniversary of the end of the war in Vietnam. The theme of the rally is: Defend Social Security! Money for People’s Needs —Not War & Occupation!

As Schmidt spoke the Army was recruiting students at this small working class college. While the anti war rally was assigned to the amphitheater on the fringe of the campus, the Army was given a prime location in the center of the school, next to the student union. A climbing wall was set up, posters were on display, and recruiters were engaging students as they walked by. One recruiter was heard cajoling a young Chicana student to "take a test" so she could be all she could be. When she said she didn’t have time to take the test the recruiter said he would "track her down." She ended up being handed an Army laptop and being practically forced into taking the aptitude test.

Back at the peace rally spoken word was entertaining the crowd. Earl Henderson, an educator from Planned Parenthood offered this:

"Too many babies in dirty diapers, ten year old boys aren't at school they sit on the roof like pied pipers. This whole scenery I wish that I could scramble it. the cause and effect implications flood my mind the subject grows more scandalous. America! how can this happen in beautiful America? I don't even want to know who's fault it is that government housing is founded on a fault a structure that has termites by default, or who takes the shame for the lead paint that stifles my Childs intellect holding out to the death comes to my mind taking my impulses back like rewinded retrospect. Hey Mr., Man my method is gladness your looking for madness I want to touch your mind to make you see as if you had this problem of roaches and rampant drug dealing right outside your door I cant tell what most people are living or fighting for it's all run down occupied ghost towns these communities are located coast to coast look how the ruptured plumbing lines need attention right now. And the city's all run down."

As the spoken word artists stepped off the stage, a faculty member spoke. He said he was a former marine and was strongly against the war in Iraq. As he spoke several police cars pulled up to the side of the stage. Menacing looking officers gathered in a circle and pointed at the stage. The speaker said we had a right to be there and that the audience needed to stand up for peace and their right to protest the war. The police, some uniformed and others in civilian clothes (but with weapons clearly visible) surrounded the site. There was a tension as the speaker finished his talk and moved to the back of the stage. Law enforcement confirmed with this Indymedia reporter that they had heard a rumor that someone was going to burn a U.S. flag at the event. They were not there to defend that persons First Amendment right to Free Speech.

Life returned to normal as the punk rock band Richie Daggers came on stage and rocked Merced for the next half hour. They were followed by The Trespassers, out of Mariposa playing folk music. Several community groups set up literature tables - Planned Parenthood, The Labor Party, and a group promoting safe drug use.

For more information about Students for Social Justice in Merced, contact their president Jason Flores at (209)383-1312. 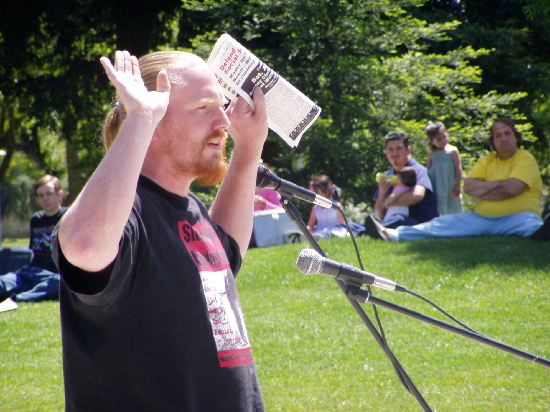 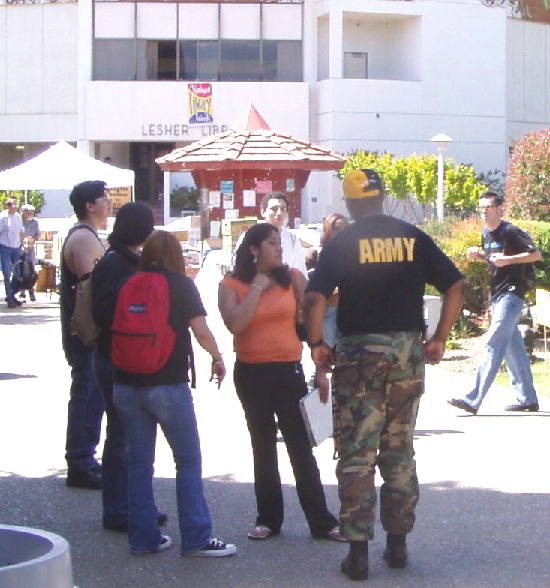 One of these students was told that she had to take “the test” and that she would be “tracked down” if she left. This was told to them by the man wearing the Army T-shirt. 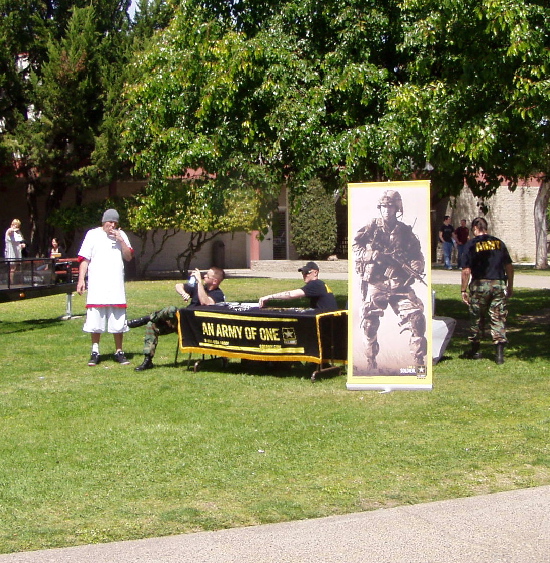 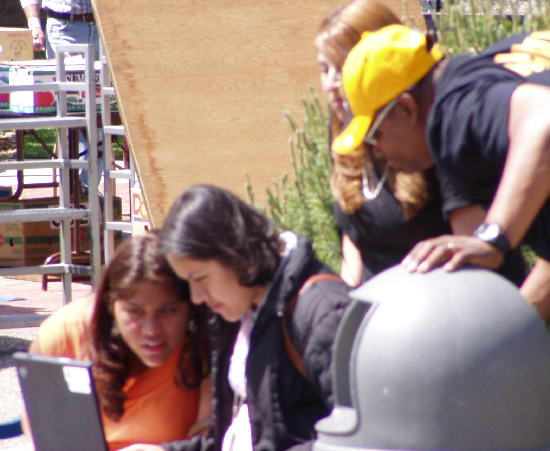 These students were given an Army laptop computer and told to take a test. The recruiter is the man looking over their shoulder.
http://www.fresnoalliance.com/home
§Earl Henderson and Spoken Word
by Mike Rhodes (MikeRhodes [at] Comcast.net) Friday Apr 15th, 2005 8:23 PM 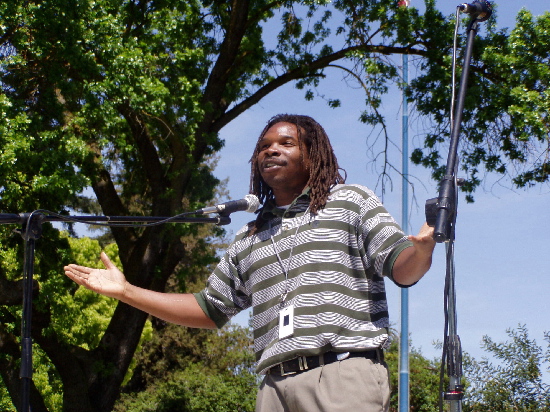 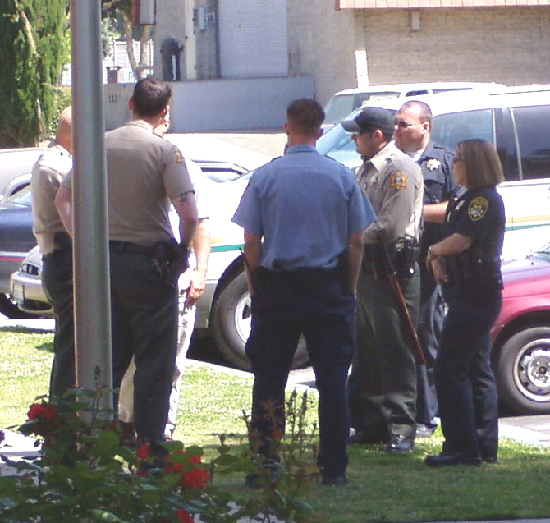 The officers here are discussing what to do if someone burns a flag at the anti-war event.
http://www.fresnoalliance.com/home
§Richie Dagger
by Mike Rhodes (MikeRhodes [at] Comcast.net) Friday Apr 15th, 2005 8:23 PM 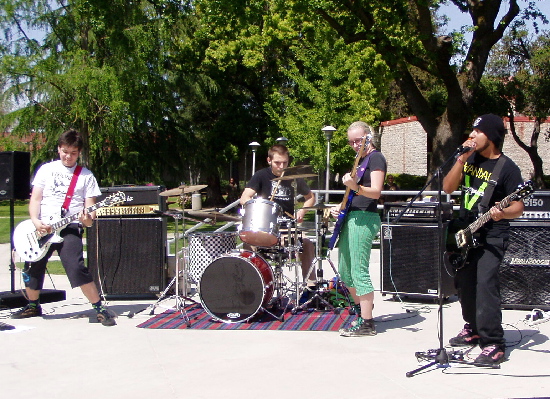 The band Richie Dagger rocks Merced.
http://www.fresnoalliance.com/home
Add Your Comments
LATEST COMMENTS ABOUT THIS ARTICLE
Listed below are the latest comments about this post.
These comments are submitted anonymously by website visitors.