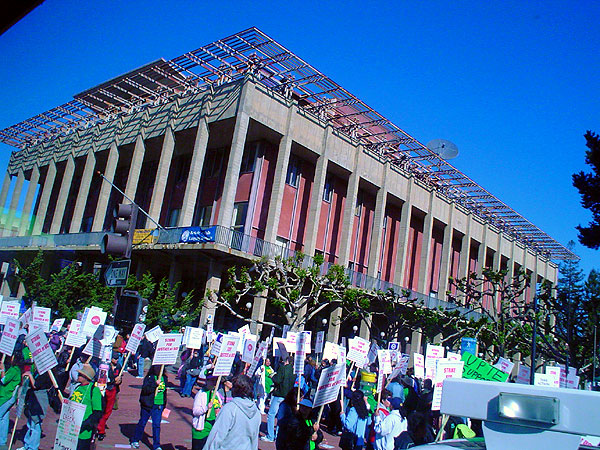 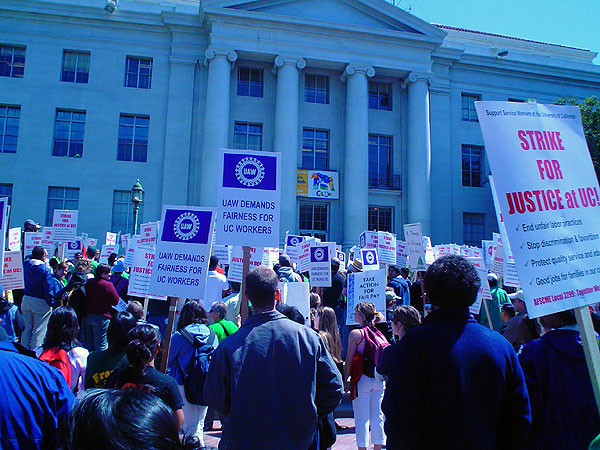 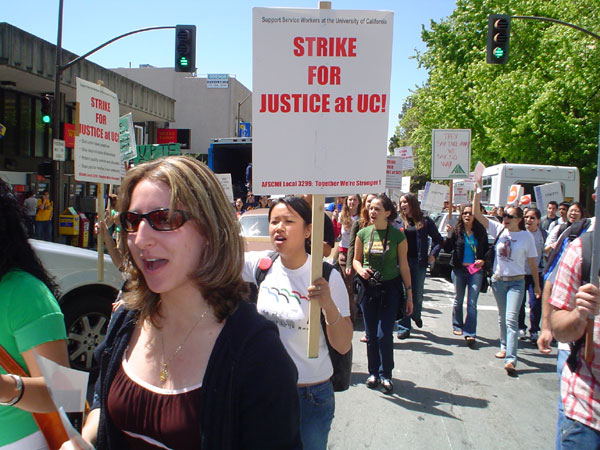 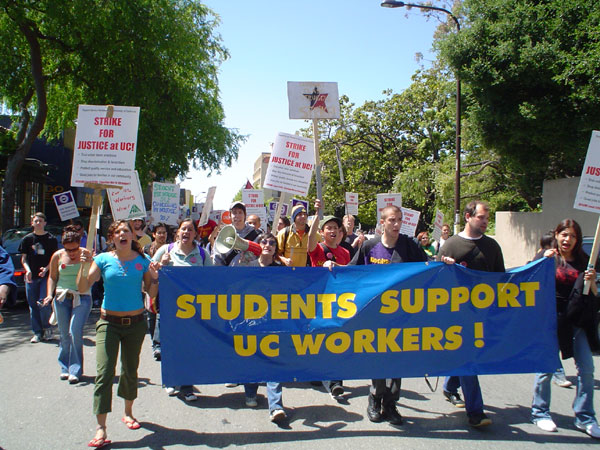 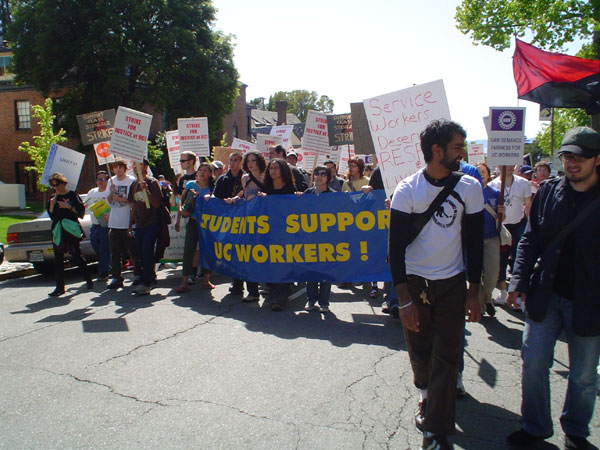 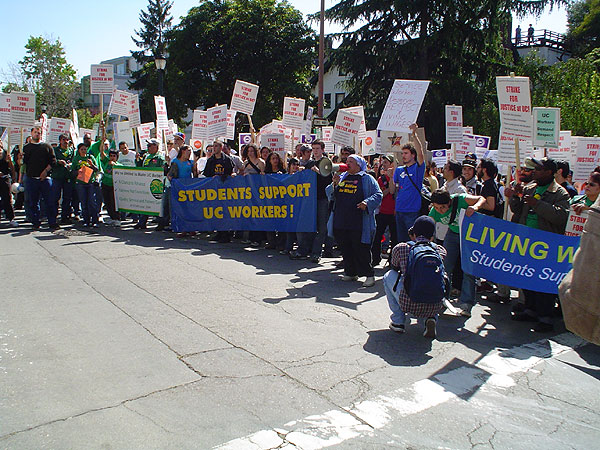 what are you thinking? this guy should be beaten, not allowed to speak. in this case, FUCK FREE SPEECH!

the chancellor is a pig and shoud be treated as such.

Add a Comment
§I agree
by but
Friday Apr 15th, 2005 7:23 PM
I was there, and I deffinately agree with what you're saying. Unfortunately, the ISO people and the union leadership were keeping everything "under control".
Add a Comment
§I.S. Shmo
by easy target
Friday Apr 15th, 2005 8:14 PM
The ISO did have a table at the event but all the Anarchist kids didnt do anything either and I didnt exactly see any of the ISO people holding them back. The guy who held the microphone for Birgeneau was an Anarchits wasnt he? The whole day was somewhat of a show of strength by the unions, but it was also a little bit of a sham in that the administration knows that a big event like this can be seen by activists as a victory in itself helping to tone down the anger of the workers.
Add a Comment
§true...but
by student
Friday Apr 15th, 2005 11:08 PM
it's true that the chancellor speaking to the crowd was not the best (or most ideologically coherent) thing that could have happened. at the same time, the ISO and the unions were just as much in control of the event as the anarchists. would it have been very "anarchist" to tell the workers (not union bureaucrats) who wanted to call out the chancellor that they couldn't have the megaphone? many of the workers did feel that they won a (small) victory. of course we can critique this "victory," and of course (we think) it doesn't means jack shit, but who are the "anarchists" to tell people what their goals should or should not be? the fact is that many of the service workers were genuinely nervous about this strike, and at the end of the day, many of them were feeling good about it. and maybe seeing the large numbers of people that showed up to support them and seeing the pigs not be able to stop them from taking the street will encourage them to take further action. would it have been more "anarchist" to storm international house and beat up the chancellor (and maybe get some service workers beat up or arrested in the process)? we should remember that the "anarchists" were there for "strike support." it's the service workers that have the power to win this fight and not a dozen or so masked-up "anarchists" getting themselves beat up by campus pigs.
Add a Comment
§What the fuck?
by yet another student
Saturday Apr 16th, 2005 6:37 AM
Sigh. Nitpicky whining. People actually do something, and suddenly everyone's a critic. Surprise, surprise.

As for me, I say great job workers, students, anarchists, etc! Well done! It's a good start, and we'll of course need a whole lot more to really solve these problems - like indefinite strikes by multiple unions in conjunction with student and faculty organizations, like campus occupations, like work slowdowns, and so on. But every struggle has to start somewhere.

A minor clarification: there isn't a clear distinction between "anarchists," "workers," and "students." They're not entirely separate groups the way many people refer to them. Many students have to work in the university in various capacities to survive - as teaching assistants, research assistants, and every variety of physical and mental labor required for running a massive university. Most, if not all, the anarchists who turned out for the strike are students and workers.

So, as for the "who are they to say anything" rhetorical question (an argument levelled more often at anarchists than any other group) - they are the workers and students with a radical libertarian left opinion. They have EVERY right to take action on their own behalf and in solidarity with others - just as much right to speak and act as centrist, right wing, or authoritarian workers or students.

As I understand it, they helped organize the flying picket, and from what I saw it was appreciated by everyone involved. As a result of the flying picket, the Chancellor had to come out of his event (which he initially refused to do and refused to let the picketers in) and answer to the crowd.

If you think that isn't good enough, you're right. By all means step the fuck up and do something. No one day of action wins a labor struggle.

As for folks who throw around talk of how these people should have been beating up the administrators and cops - you are fucking stupid at best. It would accomplish nothing of value for the workers, students, anarchists, or anyone on this side of this struggle. It would fragment and undermine this struggle. But your criticisms are sadly typical of violence-baiting used for over a hundred years against anarchists and organized labor.

Educate! Agitate! Organize! Solidarity!
http://www.infoshop.org
Add a Comment
§Keeping it under control?
by a student who was there
Saturday Apr 16th, 2005 2:02 PM
I have to agree with "yet another student". I was there too and the unions and ISO weren't telling people to do anything or not to do it. I spoke to a few workers during the rallies and especially the maches and they were very very appriciative to see so many students out in the streets with them. They know that there are many students who are serious in backing them up in their fight against the university.

It seems to me that Thursday's march was a great first step towards building student-labor solidarity. In my opinion our job now is to keep up the energy level that we had in the streets Thursday. At the planning meeting on Tuesday one of the campus workers who attended adressed the students gathered there and said that the best thing we as students can do is influence other students and get the word out about what's going on. Lets do it!

Solidarity!
Add a Comment
§decorum and control
by ghaghandi
Monday Apr 18th, 2005 2:11 PM
give us all a fucking break. you had the chancellor in your sights and acted like all that conditioning from K-12 worked. you were polite, you practiced *free speech* and let a figurehead from the ruling class return the favor.

this is a war, you don't just let pigs like that make themselves look good and come off as fair and polite. you humiliate them. you heckle them and expose what fucking hypocrites they are. you don't treat them like friends.

it's like you all never heard of people like mario savio who started more radical 41 years ago that you would if you keep kissing the chancellors ass for the next 50 years.

learn the lessons of history because the course you're on is to repeat the worst mistakes of it. i'm sure mario's turning over in his grave and cursing the lack of militance and critical vision of this generation.
Add a Comment
§re: Decorum and Control
by Bekrely student
Monday Apr 18th, 2005 11:19 PM
You give it a break. Decorum and Control? Mario Savio took off his damn shoes so he wouldn't scuff up that pig car he got up on.

If you don't think we're being radical enough, then you get over here and do something about it.
Add a Comment
§learn your history
by ghagha
Tuesday Apr 19th, 2005 7:20 AM
o.k. Bekrely student,

savio took off his shoes, but the crowd didn't budge. jack weinberg DIDN'T go to santa rita and was let go after that long seige of the pig car. people's conception of fighting power back then didn't involve being *reasonable* and letting the system rationalize itself. they definitely were learning things as they went along, but they made the iso and the anarchists of today look like moderate liberals, straight out of the reformist mold of social-democracy.

and thanks for the invite, but some of us don't hang around the college campuses anymore. without trust funds or dumpsters to feed us, some of us have resigned ourselves to the misery of wage work. anyway, sproul plaza has more of the look of the changing rooms at an eddie bauer outlet these days (to plagerize from stoney). even in the 90s it still had some of the flavor of public debate and a place of interesting social interaction. now, it has all the atmosphere of a suburban shopping mall. sfsu seems less the reign of rich kids and seems a lot more alive. let's meet there, o.k. bekrely?