Add an Event
Newswire
Calendar
Features
Home
Donate
From the Open-Publishing Calendar
From the Open-Publishing Newswire
Indybay Feature
Publish to Newswire
Add an Event
Related Categories: Central Valley | Anti-War
You Can’t Be All That You Can Be If You’re Dead
by Mike Rhodes (MikeRhodes [at] Comcast.net)
Wednesday Apr 13th, 2005 9:47 PM
Counter recruiters at Fresno City College threatened with arrest and faced with a draconian Free Speech policy. 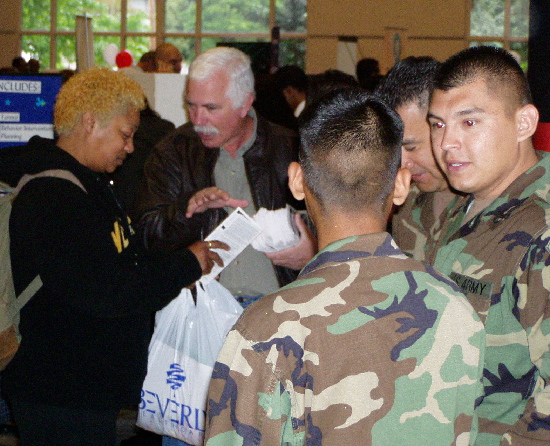 Counter recruiting activists handed out fliers, talked to students, and were threatened with arrest at a job fair at Fresno City College today. Army recruiters objected to the activists and claimed they were interfering with their job. After complaints were made to the event organizers the counter recruiters were asked to leave. Instead of leaving they were joined by more supporters and continued to hand out fliers and talk to students.

The director of College Activities, Gurdeep Sihota, arrived on the scene and told John Crockford, one of the counter recruiters, that if he didn’t leave she was going to have campus police arrest him. Crockford told Sihota that he had been told by event organizer Sean Henderson that he would be allowed to hand out fliers.

The job fair, which had originally been planned for the Free Speech area, was moved into the cafeteria because of cold weather. Crockford and the other counter recruiters thought that because the event was being held in the Free Speech area and that they had been given a go ahead by the event organizer to hand out fliers, they were on safe legal ground. But, Sihota insisted that the group had not followed the correct procedures for exercising their free speech rights. According to Sihota and Sargent Anderson of the campus police department all requests to participate in activities, like handing out fliers, must go through the proper procedures. The procedure starts with obtaining a 5 part form from the office of college activities. The Facility Request Application and Agreement must be filled out and turned in at least 10 working days before the date requested. The form is turned in to another FCC office - to the business facilities assistant Jewell Riversmith who then forwards it to additional departments for approval. Sargent Anderson explained that "we are trying to maintain order on campus. You can’t have all these different groups handing out fliers and passing around petitions at the same time." Campus police officer Caldwell was concerned about littering and asked "who is going to pay for all of the clean up if some group hands out thousands of fliers that students just throw on the ground?" A question that the writers of the First Amendment probably never asked.

Officer Caldwell and Sargent Anderson were with Gurdeep Sihota when she threatened the counter recruiters with arrest. While it was never clear why they were being threatened with arrest, Sargent Anderson said they were not going to arrest anyone just because an administrator directed them to do so. Anderson said they were trying to figure out what was going on and never felt that the situation was out of control. After asking for and receiving Crockford’s ID, the officers asked to see the ID of the other activists. When one of them refused to provide the information, Anderson said "we began to feel that the group was not cooperating with our efforts to resolve the situation." The activists, who felt that it was possible that they were about to be arrested, decided to walk off campus. Within minutes they were replaced by another counter recruiter, unaware of the previous threats, who stood right in front of the military recruiting table and handed out more fliers. She was not told to leave as she talked to students and handed out a large brochure titled You Can’t Be All That You Can Be If You’re Dead.

Crockford was told by campus officials that in order to get approval to hand out fliers at FCC he would have to have each one stamped by a college official. He was not told why this rule did not apply to the military who handed out un-stamped literature. Rules for posting fliers on campus Kiosks include:

* All postings must be approved and stamped by College Activities
* College Activities can only approve posting on the 4 kiosks
* Limit of 4 flyers per kiosk
* No postings of trees, buildings, or windows
* Posting inside of buildings must be approved by the Dean of that building
* Posting inside the Gym foyer must pertain to Athletics, FCC dance programs or intramurals.

In addition to the 10 working days it takes to process the 5 part form, it needs to be signed by the College Business Manager, the Director of College Activities, the Dean of instruction/Division Dean (Instructional Activities) and the person responsible for the activity. Copies go to the sponsor, area coordinator, building services, district police, and administrative services. There is a fee for tables (I believe the fee is $40 for a table) and you must have insurance to cover against any liability. Riversmith said that even if a group went through the entire procedure she described, it was no guarantee that the group would be approved to distribute fliers. In the end, she explained, it is up to the FCC administration who they decide to allow on campus to distribute literature, where they can distribute it, and when it will be distributed.

One of the fliers being handed out today was titled What You Should Know Before Joining the Military, The Military’s Not Just a Job...It’s Eight years of your Life! The flier asked students to ask some hard questions before signing on the dotted line. For example, the flier says that "Section C.9 of the enlistment agreement says your status, pay, benefits and responsibilities in the military can change without warning and regardless of any promises in your agreement! And your duty can be extended for years, as the Iraq war has shown."

The military recruiters at today’s job fair continually described the counter recruiters as protestors. Frances Sivak, who was handing out the fliers to students said, "I think the recruiters were upset that we were there. They told folks that we were ‘protesting’ their presence. I insisted that we only wanted to give out more information." Sivak said "we were trying to give students more information not included in the glossy brochures."

The counter recruiting flier informed students that they will lose basic rights if they join the military.

* If you leave your work without permission, you can be arrested.
* Any disobedience can result in criminal punishment.
* You can be punished without the right to see a lawyer or have a trial.
* Your right to say what you think when and how you want will be restricted.
* Individual expression through the way you dress and wear your hair won’t be tolerated.
* You will be subject to routine urine tests for drugs.

For an earlier story about a counter recruiting effort in Reedley (a small town Southeast of Fresno) see: http://sfbay.indymedia.org/news/2005/03/1727879.php 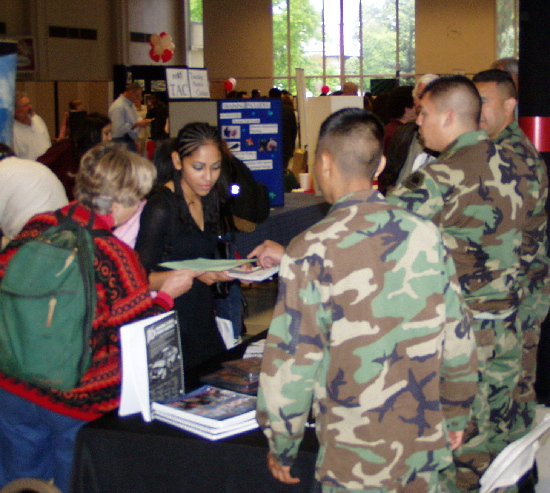 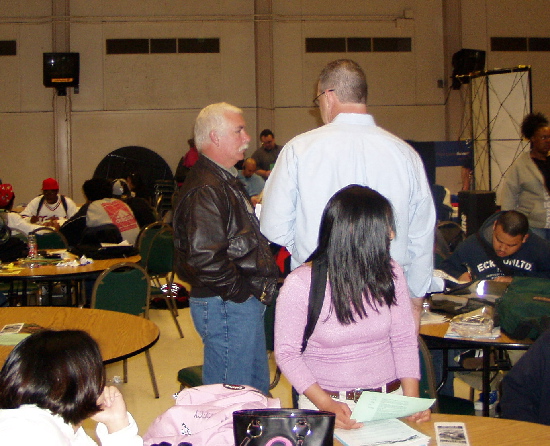 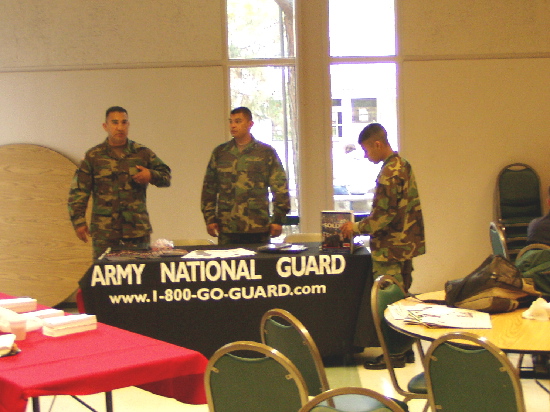 Not very many students visited the military recruiting table at Fresno City College today
http://www.fresnoalliance.com/home
Add Your Comments
LATEST COMMENTS ABOUT THIS ARTICLE
Listed below are the latest comments about this post.
These comments are submitted anonymously by website visitors.