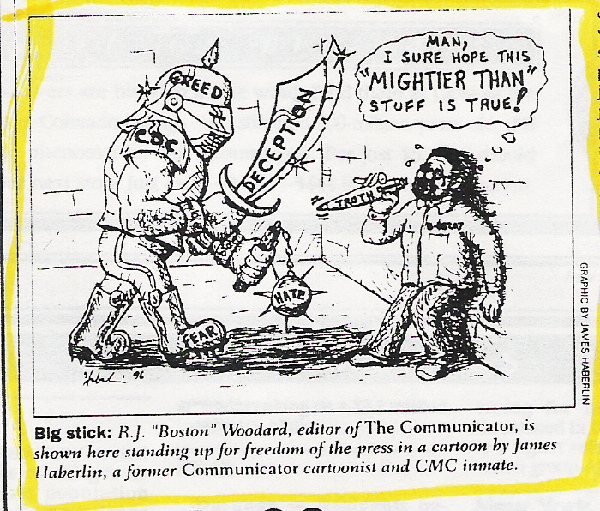 Public/Media Access to the Prison System
By Boston Woodard

In 1996, I was fired as editor of California's last prison newspaper: The Communicator, written and published by prisoners for prisoners. I was subjected to further punishment on the grounds that I might be trying to get around (then) Gov. Pete Wilson's new unwritten rule that no public media be allowed to one-on-one interviews with any California prisoner.

In the mid 1990s, the California Department of Corrections (CDC) placed a moratorium on prisoner interviews with the news media, pending a review of their regulations. CDC officials

acted in response to statements by Gov. Wilson, who cited the growth of "tabloid journalism" and the ability of prisoners to use the media for personal gain. Prison walls work both ways. They keep prisoners from society; but also prevent the public from knowing what happens behind the barriers, on the other side of the wall.

Access to the media has long served the public by shedding light on conditions inside prisons. For instance, prison interviews with "60 Minutes" and other news organizations informed the

public about deplorable conditions at Pelican Bay State Prison long before the federal court found those conditions unconstitutional. Courts have recognized the importance of a prisoner's ability to communicate with the media.

What prison officials most detest is my policy of corresponding with members of the media. In the past, I have arranged media coverage of (mostly) positive undertakings by prisoners at San

Quentin, Soledad, and Folsom state prisons that undermined the adversarial "us and them" mentality that state government and the California Peace Officer's Association (CCPOA) seem to perpetuate.

Under these circumstances, the public sees prisoners as real people -- as friends, parents, and children they are -- not some sort of creatures unrelated to human society, or as Charles Manson replicas.

It is not only convicts who are deprived of freedom of expression when prison officials exercise censorship, for prisons are no longer the transparent public institutions that can be separated and blocked from the people they serve. If government agencies are allowed to decide who can speak and who has to listen, the rights of everybody are threatened.

The CDC says journalists may visit prisoners under the same terms as family and friends but they may not bring with them the "tools of their trade," ie. pen, paper, camera or recorder. Media

representatives now need to be memory acrobats to accomplish their assignment. Prison officials also say that journalists can still interview "random" prisoners whom they happen to encounter during guided tours of the prison. This means, they will make sure you are in an area where all the prisoners you talk to randomly will have the IQ of a cinder block, or, are hand-picked jailhouse snitches spewing what the administration wants them to.

Prison officials used my continued correspondence with representatives of the media as evidence I intended to disobey the governor's announced "ban" on prisoner interviews, and I was thrown into an isolation cell.

The 1996 ruling that media will no longer have access to individual (specific) prisoners, to prevent the "glamorization" of criminals, serves the prison authorities well in preventing public knowledge of incidents.

Consider the boiling alive of prisoner Vaughn Dortch at Pelican Bay which was covered heavily by the media in the 1990s; the department's policy of encouraging deadly force to break up fights on prison yards; and lack of overall medical and mental health treatment of prisoners that has resulted in prisoners' deaths or permanent injuries and disabilities.

A prison journalists who is unwilling to go along with the censor's capricious blue pencil when attempting define his surroundings, may find the description "uncooperative, disrespectful of authority," in his or her prisoner Central File. No convict wants to spend an extra day behind bars, but for some, pursuing a story may mean just that. Prison walls are thicker than they seem. Convict journalists and their freedom of speech (as clearly written in federal law) has been a way to bring that wall down.

Since April of 1996 the public has only been afforded the watered-down "official" version of prison conditions and the treatment of prisoners -- the version approved by prison administrators and public information officers for release to the public.

What was so ridiculous about the media policy change --besides the fact that there was no written evidence of the then new rule change for prisoner or media reviewing, perhaps because of its blatant unconstitutionality -- was that current law (then & now), as expressed in the California Code of Regulations (CCR),Title 15, Section #3260, states: "Correctional Facilities and Programs are operated at public expense for the protection of society. The public has a right to know how such facilities and programs are being conducted."

That same code contains lengthy evidence for acquiring this knowledge, including rules that prevent abuse of this right by tabloid journalists, supposedly the reason for the back door media rule change.

When the final regulations were issued, furtively, as both emergency and permanent rules, they contained still another surprise. Along with the interview ban, the regulations now included a provision eliminating the confidentiality of correspondence between a prisoner and the news media. This was a policy that went on without incident for close to twenty five years. Over the years, many a prison memo has leaked out to the news media in sealed mail, much to the embarrassment of prison officials. In other governmental contexts, such memos would be considered public documents open to public inspection under Freedom of Information legislation, but it is extremely unlikely that prison officials searching media mail for "contraband: will forward such embarrassing documents to the media.

Prison officials assured the public that under the new rules, prisoner mail "cannot be censored simply for the ideas or values it contains." You'll have a hard time convincing me of that. When I was fired from my job assignment as editor of The Communicator, I was also charged with "circumventing policies" all because I wrote to a freelance journalists suggesting a way to bypass the interview ban on what I was told was "one-on-one" media interviews. I suggested that the journalists instead interview a group of people. The resulting charge of circumventing policies--a serious infraction -- was one of three that was issued and then dismissed as prison administrators shopped around for something with which to punish me. All charges against me were later expunged from my prison Central File when the CDC settled a federal lawsuit I filed (Woodard v. Duncan, CV96-4182ABC) for violating my First Amendment rights.

The disciplinary infractions leveled against me for "circum-venting policies" were all issued well before the CDC had officially promulgated the new regulations, so there were no written policies

to circumvent. Even if such comments could constitute violation of subsequent policy, the content of correspondence is not grounds for punishment. In my "illegal" letter, I even referred my journalist correspondent for further information to the public information officer of the prison, and helpfully included the phone number and office hours.

It is important that the public make informed choices about the criminal justice system. These choices are all the more critical as the prison population continues to increase and the CDC consumes a six billion dollar share of California's taxes annually.

It is unfortunate that state government and prison officials have acted to restrict media access especially as more and more prisoners are added to its population. according to prison officials them-selves. Ex-Governors Pete Wilson, Gray Davis and now Arnold Schwarzenegger have all turned a blind eye to the media regaining full access back into the California prison system and its prisoners. The local public, especially the media, should demand their right to conference with prison officials as well as prisoners (specifically not randomly) to be better informed of possible hazards and conditions in their communities.

This is not only an issue of prison rights, or prisoner First Amendment rights. It is an issue of the public's right to know about the good and the bad within these prison walls, about the draconian practices inside the prison system, and about the positive efforts of the men and women given up for lost by society.

It is shameful that men and women in prison blues should suffer for having done the right thing. It is absolutely criminal that the free citizens of California are denied their right to access prisons and prisoners in this fashion.

The Department of Corrections, undoubtedly one of the most dysfunctional bureaucracies in the state, has a history of advancing its agenda through misinformation, intimidation, and if need be, strong-arm tactics. And for good reasons: The system is a 24- carat cash cow for career bureaucrats and building contractors, an enterprise that requires all the secrecy it can muster to ensure the perpetuation of its unchecked growth.

As I have written in the past, nearly half of the people incarcerated in California prisons today simply shouldn't be there. They are behind bars as a result of another popular cash cow, the wholly bogus "War on Drugs." I'm no M.D., but it seems reasonable enough that medical problems shouldn't be confused with wanton criminal behaviors, nor should it be treated as such.

Society would be better served by sending most non-violent offenders to drug treatment facilities or Harvard. Both are cheaper alternatives. More reasons why full media access into prisons is imperative.

The indomitable insanity of the CDC kicked in and took control once again of the public's right to know what goes on behind prison walls. In the twisted logic of the CDC, policies such as media access that actually do the public good are bad. Bad policies that conform to the CDC's agenda are good. Silence is golden.

The entire prison system begs for severe, fundamental reform. A good place to start is the active adoption of full media access to state prisons and its charges. The most vital element in the penal system's ultimate reform however, is the continuation of uncensored voices of prisoners, voices from inside the system. Without the light such unfettered voices cast, the ubiquitous roaches inherent in the system will have no reason to flee.