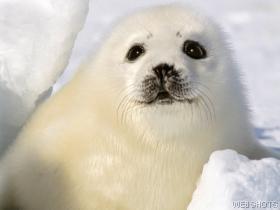 These are some of the indelible images so ubiquitous in 1970s and 1980s, the heyday of the global “save the seals” movement.

During those years, animal protection groups from around the world joined forces to fight the wanton slaughter of baby harp and hooded seals that took place each year on Canada’s northern ice floes. Pictures from the hunt sparked outrage and, eventually, a measure of reform.

Today, the images are back, more haunting than ever. That’s because the Canadian seal hunt is back, bigger and bloodier than before. And animal advocates have come together once again to fight the senseless, barbaric killing.

In truth, the seal hunts never really went away. Although the international outcry sparked by advocacy campaigns of the 1970s and 1980s resulted in a decline in the number of seals killed in Canada, the hunts were never entirely halted. From 1983 to 1987, an average of 36,000 seals were killed each year in Canada, down from about 300,000 each year during the 1950s. It seemed that a partial victory had been won.

Just recently, activists began once again to shine a spotlight on Canada’s northern ice — and to expose the horrors of the state-sanctioned seal hunt.

This renewed focus comes on the heels of a 2003 announcement by the Canadian government that it would permit the clubbing and shooting of close to one million baby harp seals over the next three years, the highest quota for seal killing in Canada’s history, and the largest commercial kill of marine mammals in the world. The government claims that the “culling” of seals is necessary in order to save the imperiled cod. They charge that the seals eat “too many fish,” while failing to acknowledge the true cause of the precipitous decline in cod populations: overfishing by humans.

Although killing seals won’t bring back the cod, the commercial seal hunt continues to be promoted and subsidized by the Canadian government. It is a bloody business.

On April 5, 2004, the New York Times described how hunters bear down on helpless seal pups, and “with one or two blows to the head, they crush the skulls, sometimes leaving the young animals in convulsions.” This year’s hunt has already resulted in the deaths of more than 320,000 seals, most of who were between the ages of twelve days and three months.

In the current hunt, most seals are shot, rather than clubbed (older seals are difficult to reach and club on the ice floes). Hunters, however, prefer clubbing to shooting, not only to save the cost of bullets, but because pelts containing bullet holes command lower prices on the fur market.

Neither shooting nor clubbing is a humane form of killing. Many animals who are shot are not immediately killed, but are wounded. Some wounded animals escape into the sea, then die beneath the ice. Others are dragged aboard boats to be clubbed, ostensibly to death, although, according to veterinarians taken to the hunt by the International Fund for Animal Welfare (IFAW), as many as 42 percent of the animals examined were likely skinned while alive and conscious.

API has supported the campaign initiated by HSUS and IFAW to end Canada’s seal slaughter. We’ve been active in encouraging U.S. Senators to pass S. Res 269, a resolution condemning the massacre (see photo of the ad, which appeared in the Congressional newspaper Roll Call, on right). As part of the International Fur-Free Alliance, we’ve helped push for bans on the importation of seal pelts — including the ban on the import and trading of seal fur recently adopted by Belgium. API was also one of the many groups that helped raise public awareness of the slaughter by joining graphic advertisements in publications such at the New York Times.

You, too, can speak up for the seals! write the editors of indybay and sfindymedia and demand that they stop supporting this crule practice sf [at] indymedia.org
editorial [at] sfimc.net Contact your two U.S. Senators, and ask them to sign on to S. Res. 269, condemning the Canadian seal massacre. You can look up the names of your U.S. Senators at http://www.Congress.org, and you can contact them by calling 202-224-3121 or writing to:

Add Your Comments
§Canadian shame
by judy
, the commercial seal hunt continues to be promoted and subsidized by the Canadian government.
Add a Comment
§condem all canadians for this act
by rob
every canadian must be publicaly embarrised over this no matter who they are. make them blush with shame
Add a Comment
§Never forget
by Gina
stop the killing
Add a Comment
Support Independent Media
We are 100% volunteer and depend on your participation to sustain our efforts!