Ecuador is living moments of some its greatest historical political tension as opposing political factions unite to regain power in Congress and the Supreme Court. 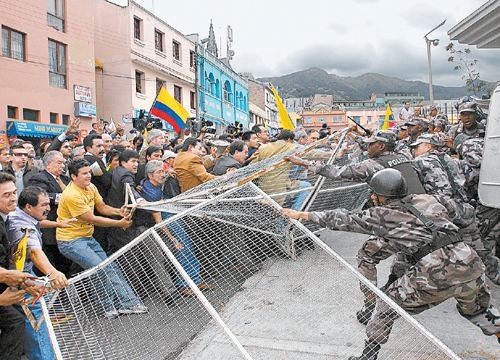 The daily drama lived in Ecuador is absent from the news media as civil disobedience erupted this week in this country’s main cities against President General Lucio Gutierrez.

Ecuador is living moments of some its greatest historical political tension as opposing political factions unite to regain power in Congress and the Supreme Court.

Gen. Gutierrez’s presidency has been riddled with internal controversy since he was elected in 2002. Two years before Gen. Gutierrez had befriended the indigenous movement and provided military support in a coup against President Jamil Mahuad, ousted in 2000 after an economic fallout that forced banks to close down and left many without savings.

After elected president, Gen Gutierrez friendship with the indigenous movement lasted only about six months, when the official indigenous political party, Pachakutik, broke its alliance with the administration accusing it of planning to implement neoliberal policies. Since then Gen. Gutierrez has tried to repeatedly undermine the movement by closing down offices, such as Ecuarunari, and splitting up the movement by appointing members close to the presidency, such as Antonio Vargas, to “opposition indigenous groups”. CONFENIAE, the Confederation of the Nationalities Indigenous to the Amazon in Ecuador, successfully boycotted this attempt and elected a member close to their ideals instead.

In the Amazon, indigenous groups have been battling their own war against oil companies, such as Texaco and Arco, for polluting the environment and ancestral lands. On November 4, 2003, the president of the Amazon Defense Front and environmental activist, Angel Shingre, was shot dead in the city of Coca, Orellana province.

A similar assassination attempt against Leonidas Iza, president of Ecuador’s largest indigenous organization CONAIE, was thwarted by his family on February 1, 2004.

These and other human rights violations prompted a visit from an international delegation of lawyers and human rights defenders to investigate allegations of threats and personal attacks against journalists, union workers, political leaders, and members of the opposition. The International Mission for the Defense of Human Rights arrived in Quito, Ecuador, on Monday, April 4.

The Supreme Court has been under siege since members of Congress supporting President Lucio Gutierrez fired 27 of the 31 Supreme Court judges in December.

One of the pardoned members, Abdala Bucaram, was forced to leave the country in 1997 under allegations of corruption. He was accused of lifting $88 million from the government during short-lived six-month presidency.

Clashes with the police earlier this week left 110 people injured as people struggled to enter the Supreme Court premises, demanding the immediate removal of Guillermo Castro. According to the Red Cross, about 30 of those injured were children.

Mayors and local officials in Ecuador’s major cities as well as CONAIE have called concurrent national mobilizations against President Gen. Gutierrez and his immediate resignation.

In other news, US Ambassador in Ecuador, Kristie Kenney, spoke two weeks ago at a university in Guayaquil congratulating the country for all its successes in 2004. She reminded the audience of victories over negotiations in favor of the Free Trade Agreement of the Americas (FTAA) and a closer relationships between the US and Ecuadorian governments.

In November 1999, Ecuador leased its Manta air base to the United States for 10 years, to be used by U.S. aircraft participating in Plan Colombia. The Manta base is the largest of its kind in South America with as many as 475 US military personnel stationed there.