Add an Event
Newswire
Calendar
Features
Home
Donate
From the Open-Publishing Calendar
From the Open-Publishing Newswire
Indybay Feature
Publish to Newswire
Add an Event
Related Categories: South Bay | Anti-War
San Jose M20 Stop The War March and Rally
by Hiraeth (hiraeth [at] riseup.net)
Monday Mar 21st, 2005 2:00 PM
Despite heavy rain on and off throughout the afternoon, over 2000 protesters gathered Sunday, March 20th in San Jose and marched to the Plaza de Cesar Chavez as part of the South Bay Mobilization for Peace's Stop the War Event.

Despite heavy rain on and off throughout the afternoon, over 2000 protesters gathered Sunday, March 20th in San Jose and marched to the Plaza de Cesar Chavez as part of the South Bay Mobilization for Peace's Stop the War Event.

An interfaith service was held at the Unitarian Church in downtown San Jose while the "Peace Train" contingent gathered at the train station at 1:30 p.m.. Both groups made their way to the park, marching through downtown San Jose. A wide variety of groups were represented, including South Bay communities of faith, unions, antiwar groups; veterans groups, human rights and students groups, and political third parties.

Speakers charged the crowd with continuing the work of peacemaking in their community, in the nation and throughout the world. Nadia McCaffrey, mother of deceased National Guardman, Patrick McCaffrey, spoke passionately about the immorality of the war and of her peacemaking efforts with other parents of Gulf War victims, including humanitarian missions to Iraq. Using the art of the spoken word, Troy of Debug rhythmically spelled out American's need to engage in critical thought in light of governmental and corporate propaganda campaigns.

War is legitimized by support from academia, according to a UC Berkeley professor. He called for an end to weapons development, official and tacit approval of defense-related projects and encouraged unbiased assessment of the U.S. policy on college campuses. A local priest spoke about the righteous anger of Jesus, union representatives affirmed their opposition to the war and a former draft resister spoke about his new Omega campaign to take the "we won't go!" pledge.

Call to action: come out and greet the governor this THURSDAY. Let him know what you think of his education, nursing, workers and logging policies. Ask him to put pressure on the Bush administration to bring our troops home now. 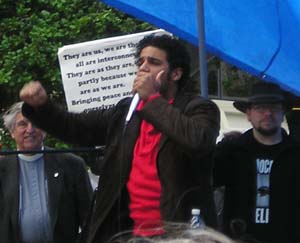 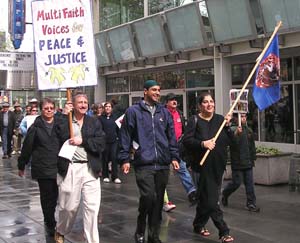 Multifaith Communities Against the War. Samina Faheem Sundas of American Muslim Voice, right. It was inspiring to me to see people of different religions coming together to say that this war is immoral.
§San Jose Stop The War March - 4
by Hiraeth (hiraeth [at] riseup.net) Monday Mar 21st, 2005 2:00 PM 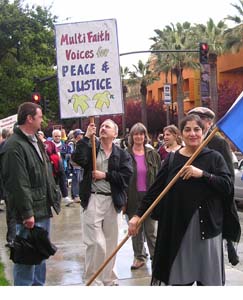 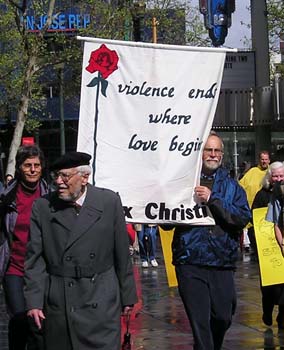 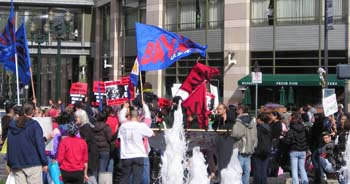 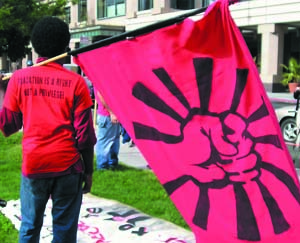 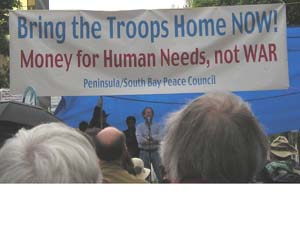 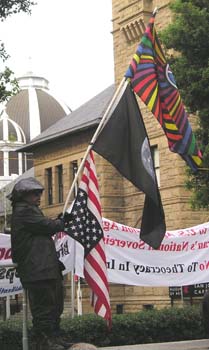 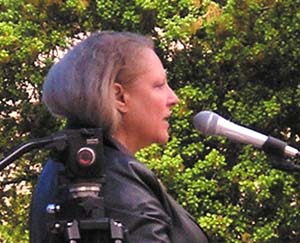 Nadia McCaffrey, mother of killed National Guardsman, Patrick McCaffrey, spoke passionately about stopping the war.
Add Your Comments
LATEST COMMENTS ABOUT THIS ARTICLE
Listed below are the latest comments about this post.
These comments are submitted anonymously by website visitors.