Add an Event
Newswire
Calendar
Features
Home
Donate
From the Open-Publishing Calendar
From the Open-Publishing Newswire
Indybay Feature
Publish to Newswire
Add an Event
Related Categories: Central Valley | Anti-War
Peace Vigil and Counter Recruiting in a Rural Central Valley Town
by Mike Rhodes (editor [at] fresnoalliance.com)
Friday Mar 18th, 2005 11:23 PM
Reedley, a rural community about 35 miles Southeast of Fresno, held an anti-war vigil on the eve of the second anniversary of the invasion of Iraq. After the vigil they discussed the issue of counter recruiting with a group of students from Reedley High School. 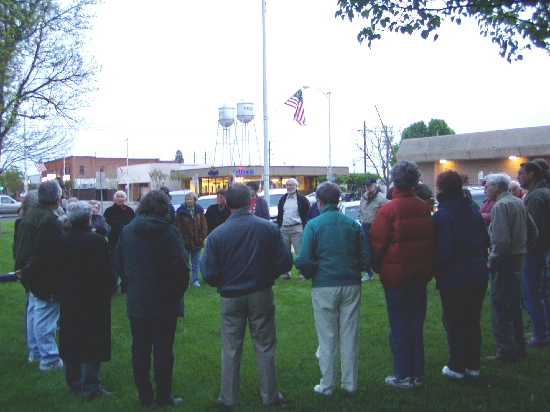 The Reedley Peace Center held a vigil on the eve of the second anniversary of the U.S. invasion of Iraq. The group stood in a circle at Pioneer Park in downtown Reedley, held hands, and sang songs of peace. The regular members of the Peace Center were joined by a group of students from Reedley High School.

After the vigil, the students accompanied the group to a local church where they made a presentation about military recruiting practices on their campus. Victoria Benavides said that military recruiters have a huge presence at her school and believes that they are targeted because of the large number of minority, primarily Latino, students that attend. She said that the school has planned a Military Day on May 20 and that the group she is a part of, Students for Peace, wants to provide counter recruiting information. The students were seeking feedback from the Reedley Peace Center on their plans.

The Students for Peace want to hold a series of educational events, hand out fliers, and perhaps have a table on Military Day at their High School. The students said they believe it is important to tell students about some of the deceptive practices that recruiters use and to inform them about alternatives to paying for college. Because of the poverty and lack of opportunities for students at Reedley High, many feel that the military is the road to a better life. Students for Peace have been told by the school administration that they can distribute information as long as all of their events are organized by students.

Several non students at the meeting wanted to help the group and complained that it was unfair that military recruiters could be on campus, but not peace activists from the community. The students appreciated the offer to help but said they were just happy that they were being allowed to share information with their fellow students. They realized that the situation was not fair, but did not want to push the issue. Reedley Peace Center members said they would help, in any way they could, and encouraged the students to let them know what they needed.

The Reedley Peace Center is a faith based anti-war group and the people involved seemed to gain strength from the sense of community at the vigil, potluck, and presentation by the students. The group holds educational events and a potluck every Friday evening. There next event will be:

Friday, March 25
6:30 - 8:30 PM
The Reedley Peace Center presents the movie: MINDWALK. Three vacationers meet by chance on the Island Abbey of Mount St. Michel in France and encounter a magical excursion into the world of ideas.

Light potluck at 6:30. Program begins at 7 pm. This event is sponsored by the Reedley Peace Center and will be held at the Fellowship Hall of First Mennonite Church, on 'L' street between 12th and 13th streets in Reedley. Admission is free. Contact Don Friesen by email at dfriesen@telis.org 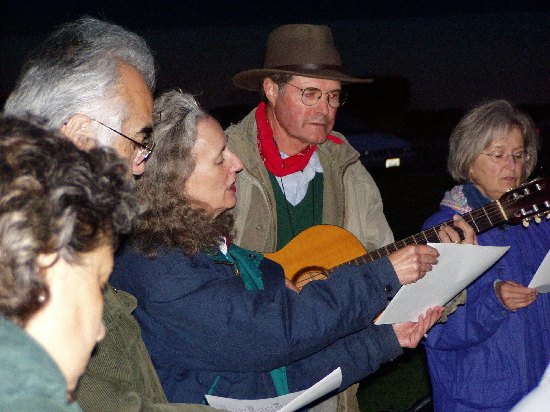 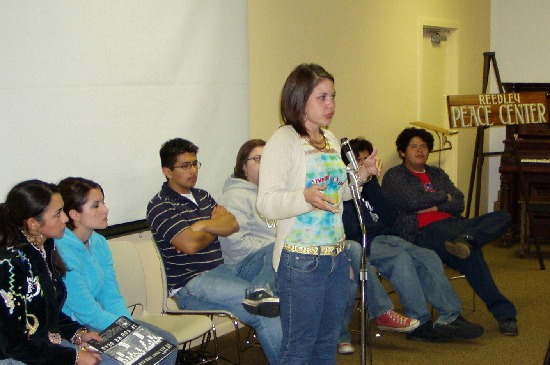 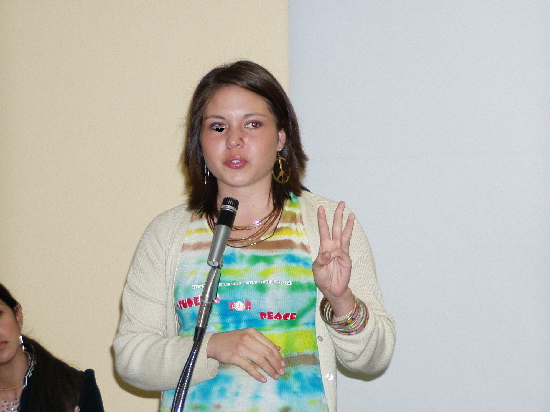 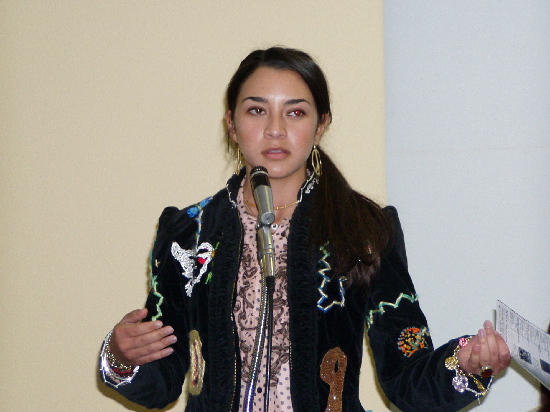 Gigi Fajardo said that students need to know about the deceptive recruiting practices of military recruiters and understand that there are other ways to get money to go to college.
http://www.fresnoalliance.com/home
Add Your Comments
Support Independent Media
We are 100% volunteer and depend on your participation to sustain our efforts!